Going for the Gold

There's just something magnetic about colored refractors that match a team's colors.  And while it certainly feels like Topps has spanned the entire rainbow in recent years, the standard for the refractor has always been the gold refractor in my eyes.  The gold standard, if you will.

And there's just something about the gold mixed with the Pirates traditional black-dominated uniform that really pops.

I've tried to shy away from prospect cards in recent years.  Since finishing college, I just don't have the time to closely follow the minor league system the way I did, and with the chaos that has become the Bowman brand it's just more hassle for me than it's worth in my eyes. 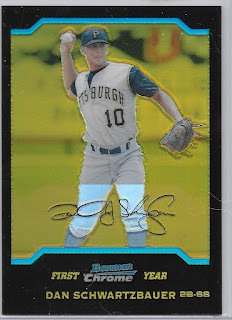 But as with most cards, the price of gold refractors seems to creep lower and lower.  I remember when I was thrilled to buy one for $4 shipped.  Then $3.  And now...well, there's a certain point where willpower goes out the window.

I added both these cards for just a hair over $2 each.  Delivered. 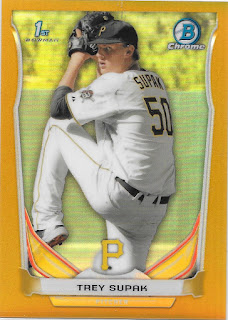 Setting the world on fire?  Not exactly.

But both are great additions.  Schwartzbauer is an alum of my alma mater, Duquesne University, and graduated a couple years before I got to campus.  Considering only a handful of players were drafted (including ex-Bucco Joe Beimel) before the baseball program was scrapped in 2010, it hasn't been tough to chase down cards of the few players that have them.  So this was a big pickup in my book.

And Supak was a 2nd round pick out of high school in 2014, who the Bucs traded away this offseason for Jason Rogers (he of 14 major league at bats this year).  Supak hasn't pitched great, but he's still very young with a strong pedigree.  And for the price...it's shiny!