On the Road Again

Finally!  After a month-plus away, I'm back behind the wheel of my beloved blog.  The last month or so has been pretty hectic.  My hour drive each way to and from work each day has really taken a toll on me, and it feels like I've been living out of my car.  Not literally of course - my card collection would never fit.

But stacks of paperwork, arts and crafts projects, food wrappers, and empty water bottles have made my backseat look frighteningly similar to the contents of an adopt-a-highway cleanup day.  And doing some cleaning over the weekend I discovered some long forgotten (and assumed mailed) trade packages.  I think one of them dates back to last calendar year (sorry Jeff!).  Hopefully the contents will more than make up for the sun-faded ink, long waits, and occasional pizza grease on the packages.

The flip side to some more disposable income has been...a complete and utter disinterest in collecting.  No, I'm not hanging up my toploaders.  Not by a long shot.  But there just isn't much in the hobby keeping my interest.  COMC is a gutted and unsearchable shell of itself.  While I like some of the low-mid end releases Topps has put out this year, I'm still not going to tempt restarting my wax addiction.  And new Jack Wilson additions have crept to maybe one card per quarter over the last year or two.

But that doesn't mean I've given up completely.  I had a few packages come in over my collecting lull, there were a few fantastic ebay purchases, and flea market season is getting in full swing.  So I hope you all will forgive me Houdini act for the umpteenth time and I'll jump right back into the madness.

I've bemoaned how tough it has been to find new Jack Wilson cards over the last few years countless times.  The life of a no-name player supercollector is a hard knock life, after all.  So when those big scores do come in, it isn't always through the most conventional means.  I was at home finishing up some paperwork a few weeks ago when I got a text.  It was from Brad, a Sean Burnett collector I've cyber-known for almost a decade but have never actually met in person, asking if I needed a 2005 Leaf Certified Materials Emerald Jack Wilson.  For some Jack cards I'll have to double check my master checklist - but no such need on the Mirror Emerald.  Its absence in my collection is seared into my collecting memory.

I few quick texts directed me towards a thread on Blowout's forums with the card for sale for a mere $8.  Only problem?  I didn't have a blowout account.  Or if I did, the username and password are long lost to my memory.  I quickly registered for an account, only to be informed that I would need to wait for moderator approval to actually be able to post.

The better part of the next 24 hours were spent repeatedly refreshing my email waiting for activation and refreshing the thread hoping nobody would snag what was to me the deal of the year.  Key word: to me.  In reality, I had little to worry about.  When my account was finally approved, there wasn't even so much as a nibble on the Wilson - a card that I would have gladly bid significantly more than $8 for on ebay. 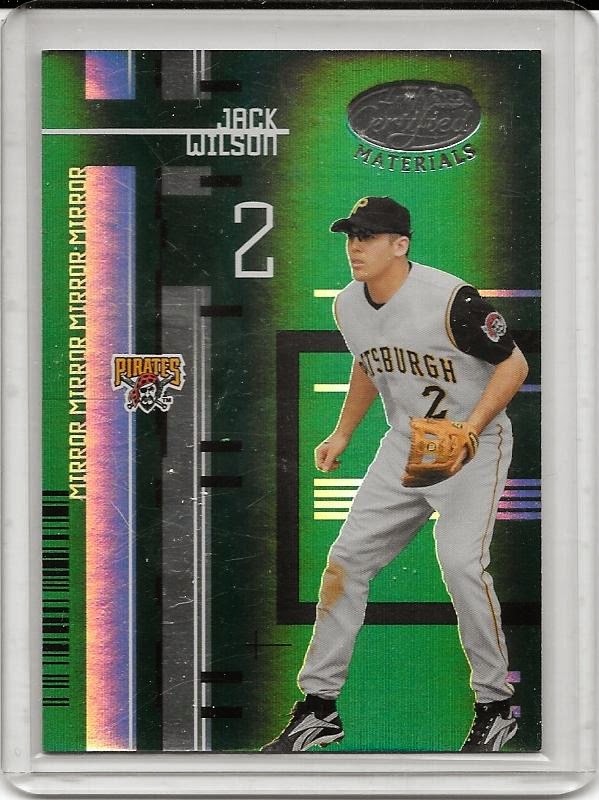 The LCM sets are among my favorites (though I'm partial to Jack's '03 card over the '05), and the Mirror Emeralds are tough finds at only 5 copies.  I believe I recall one or two collectors working on the set around the original release date, so the cards are particularly scarce.  I don't think I have ever seen the '05 Emerald previously.

Hopefully it won't be another month until my next post!
Posted by Mark at 11:03 AM