Cleaning Up at the Card Show 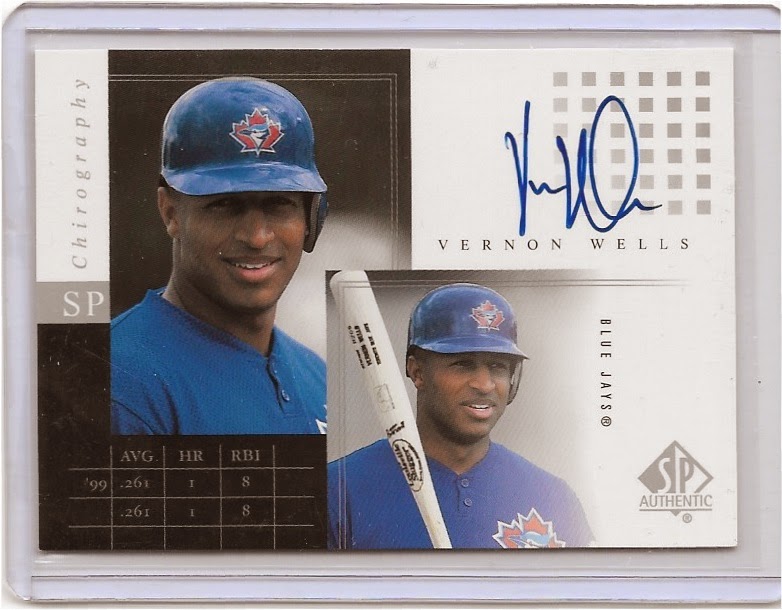 This weekend was pretty crazy, but I managed to squeeze in a trip to a mall show out near my parents' house.  It's only the second show in Pittsburgh since the big annual Robert Morris show in May, and the other show happened to be last weekend when I was in Boston.

With shows such a rarity around here anymore, I wasn't going to miss it.  I made it out on Friday, and it was well worth the trip.  When I first get to a show, I try to scope out any tables that look to have a crowd, since it's a fair bet thats where the deals are and I want to at least get a crack at some stuff before dealers and flippers totally pick it over.

The show was largely dead when I got there, but I noticed a couple local flippers anxiously flipping through a table.  The sign said everything was a buck, and was covered with a couple dozen boxes.  A quick flip through didn't look promising - some star base cards, inserts from recent Topps years.  Nothing I'd consider paying a buck for.  And then I heard the guy next to me say "Hey, there's some Jose Guillen autos in here," and caught a glimpse of a '98 Donruss Signature auto out of the corner of my eye.  Luckily they didn't make it into his pile, and I quickly shifted my search to the left a few boxes towards where he was.

Much to my surprise, most of the other boxes were loaded with autos and game used cards.  There was no rhyme or reason - nothing was sorted in any way, and years and sports would change randomly.

There wasn't anything overly impressive in terms of Pirates or Steelers (though I did snag both the '98 Guillen and its Millenium auto parallel), but I hit a small goldmine with some of the cards.  I easily could have pulled out more cards with the intention of flipping them, but was trying to watch my budget.  Nonetheless, at a dollar a pop I think I did pretty well... 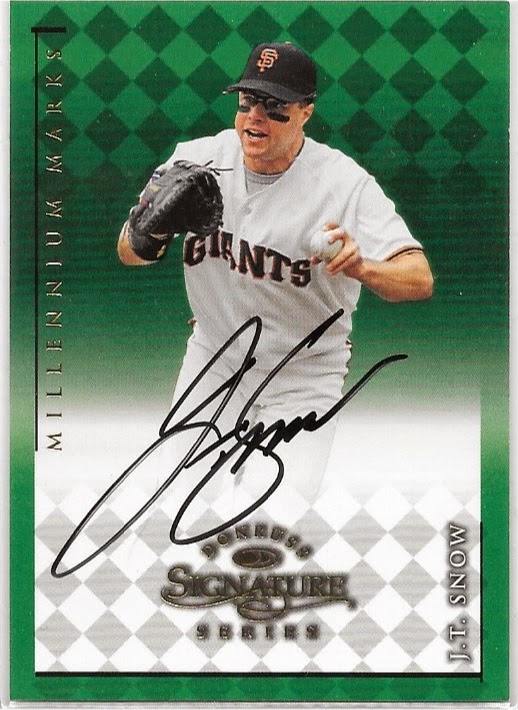 I've been slowly picking up autos from some of my favorite players of the mid 90's, and this was a perfect chance to make a nice dent.  One entire box was filled with Donruss and Leaf Signature autos.  Unfortunately the vast majority were from 1996's Extended series,  and was a vast who's who of middle relievers with 3 year careers and fringe bench guys.  Still, I was able to find a couple decent additions to the collection.  Looking over the various checklists, I may make a run at the 1998 set one of these days.  It's aesthetically stunning in my opinion, and the player selection is a little more manageable, since most of the superstars were sp'd in the colored parallels. 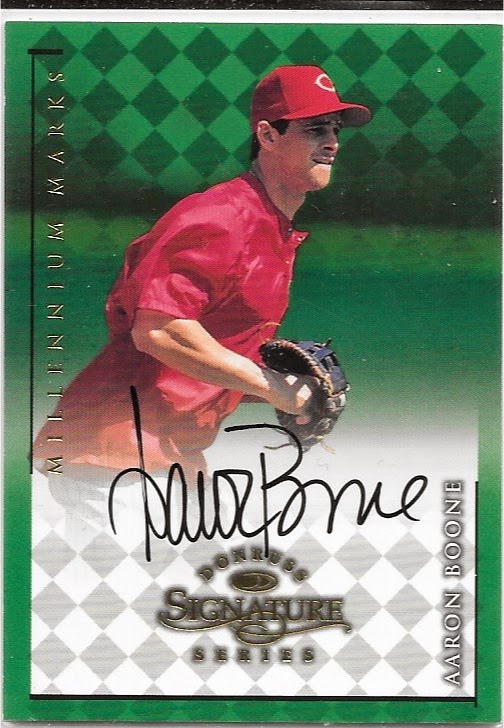 But perhaps the most surprising finds were the faded star cards.  Hobby trends inevitably shift to the newest, shiniest thing.  But it's crazy to think that cards of players who were at or near the top in the game just a few years ago can now be had for less than a Wendys hamburger. 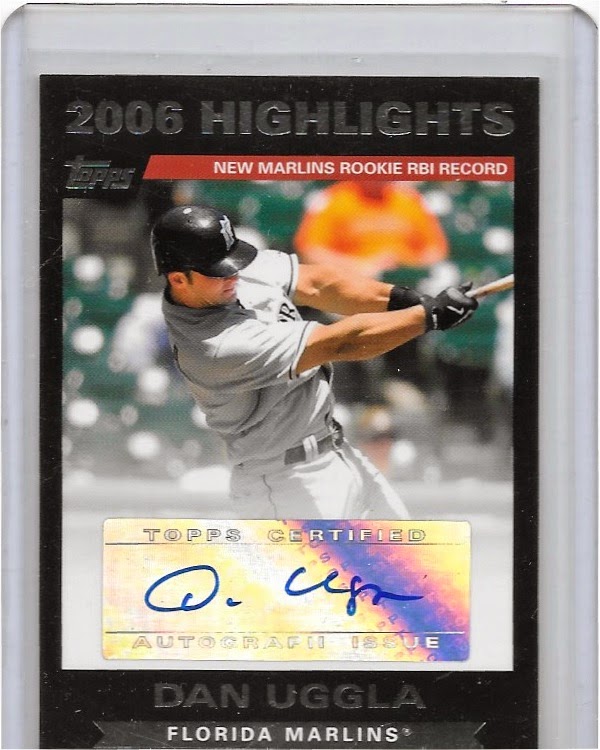 As cringeworthy as the auto, photo choice, and design are...it's a freaking Dan Uggla auto for a dollar.  I picked Uggla's Topps Total rookie card out of a dime box when he first hit the majors, and promptly sent the card out in the mail for a TTM autograph in my younger, less researched days.  The card never came back, so this is a nice substitute.  Though I still do need to replace that Total card. 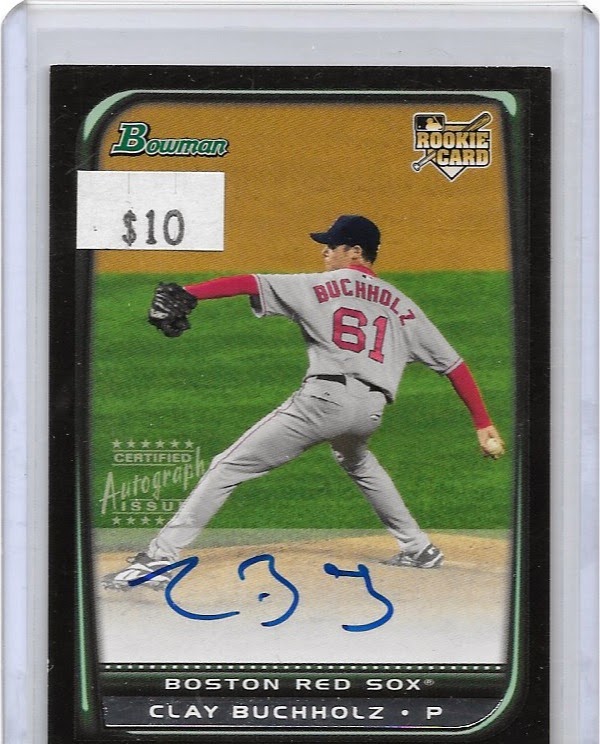 Granted, Uggla's star (and career) have faded quite a bit in the last few years.  But it was a little surprising to see autographs of players who are still performing well at the major league level popping up for a dollar.  But then again I'm sure this dealer had more than made his money on these cards months and months ago - it's easier to throw it all in a box and sell it for a buck than to sort through and price everything when there only may be a handful of cards worth pricing higher. 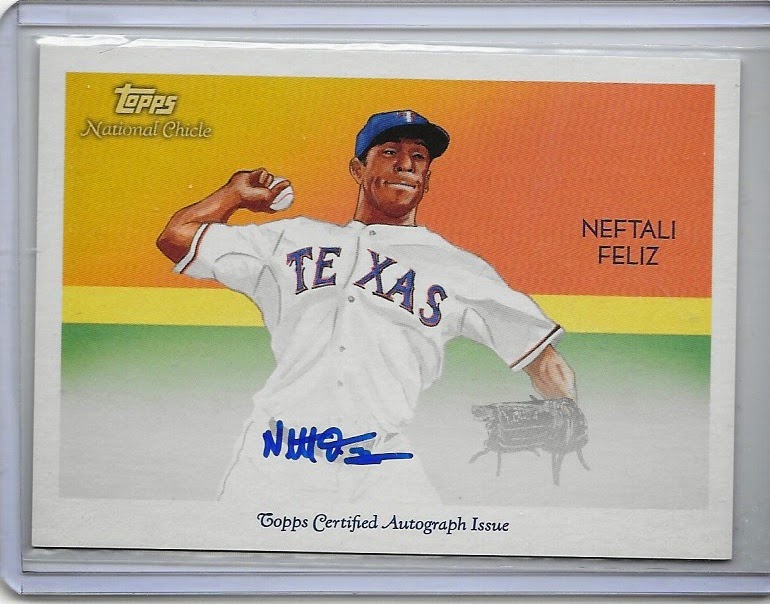 In an ideal world I'd probably want an autograph of these guys that was a little more visually appealing.  But that's the point, isn't it?  I wanted their autograph.  The pretty picture behind that?  Well, that's just icing on the cake. 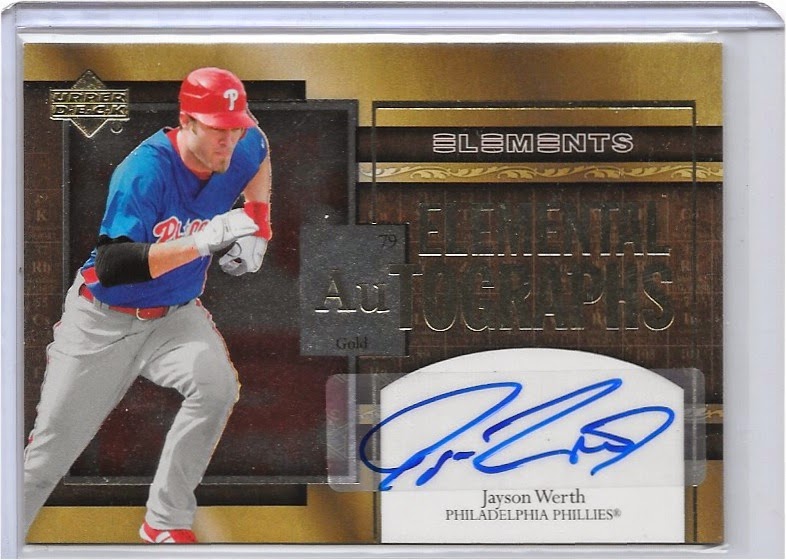 I may have gotten a bit carried away.  My non-Pirate certified autograph collection has grown pretty aggressively this past year, and this weekend did nothing to slow that down.  Still, some of these cards may get passed along to better homes at some point. 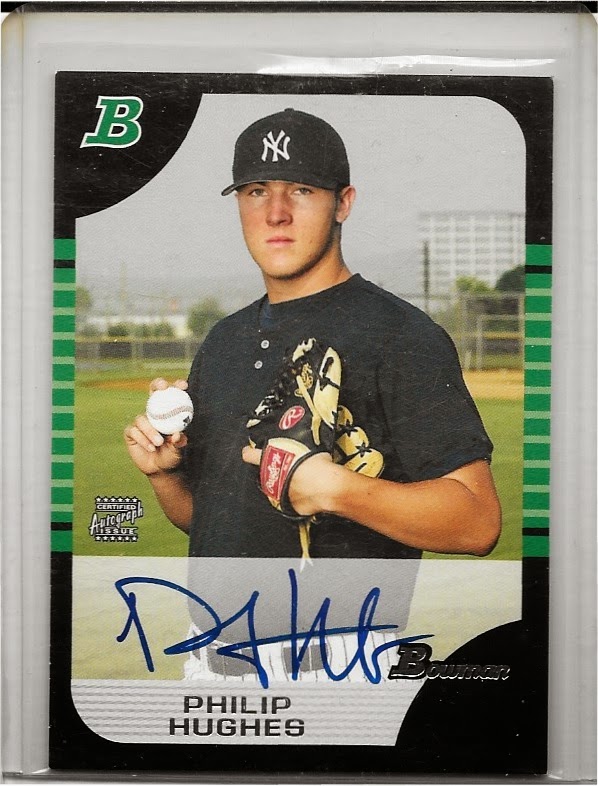 Were any bloggers Beckett Message Board members during the Phil Hughes saga?  Phil was apparently a big card collector around the time he was drafted, and was a posting member on the BMB for a while until the constant harassment probably ran him off.   Still, it's been an auto I have wanted ever since. 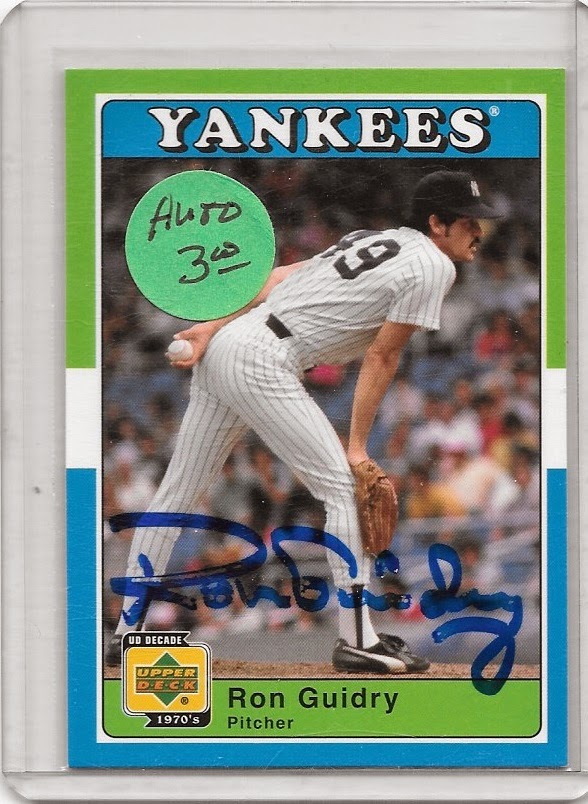 1) Bulk inventory dealers who make their money off the big time and certified stuff, and couldn't care less to be bothered with an autograph of questionable authenticity that they aren't familiar with pricing on.  I've had numerous dealers give me an explanation along the lines of "I don't actually know if it's real, so I don't want put a high pricetag on it and accidentally rip somebody off."  It's an admirable sentiment in a hobby where honesty isn't always all that common.  But I think it also shows how much we rely on stickers, vague authenticity statements, and the good word of the kindly card companies these days.  Luckily if you are at least passingly familiar with a player's autograph, signs of an autopen or forgery, and willing to get burned for a buck or two, it's a bargain shopper's dream. 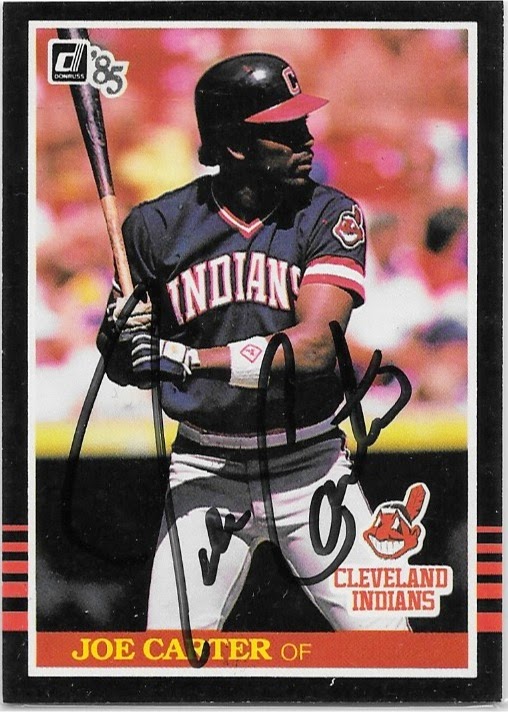 And of course there's the second type...

2) The autograph dealer.  The guy who knows his stuff, and maybe even got the cards signed himself.  But is also convinced that they should be worth as much, nay even more than a certified auto.  And I hate to break it to you pal, but I'm not going to pay $5 for a Rafael Belliard auto, let alone the $20 you want for Jason Bay.  Can deals be found?  Sure.  But mostly these guys are the standoffish, not particularly well socialized jerks found standing outside hotels and ballparks nationwide with a page of 9 of the exact same Topps card to be signed, just put into a situation where money can change hands.  The end result?  Hint: none of the cards I post on this blog come from those guys. 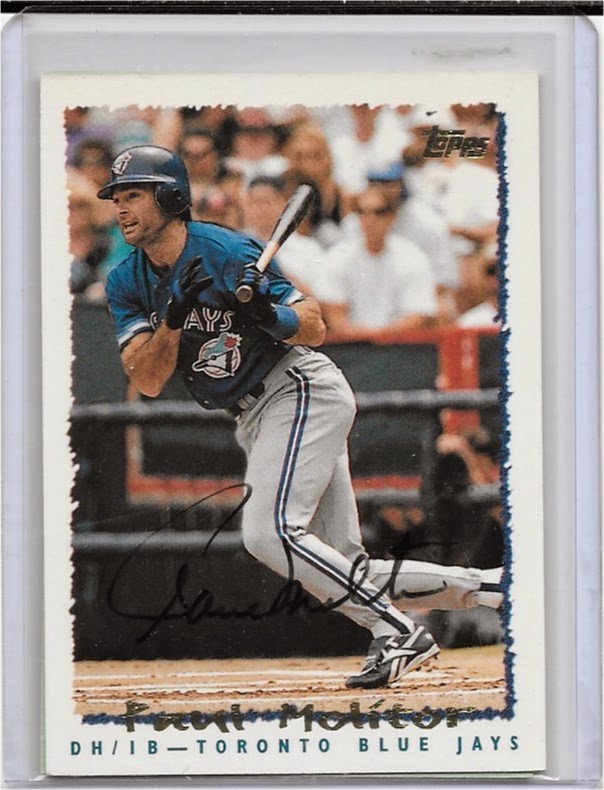 But a Paul Molitor auto for a buck?  Don't mind if I do.

But perhaps the coolest find of the day came from another dealer I know who had a table of nothing but dime boxes, again just selling out the inventory on a big deal he already made his money on. 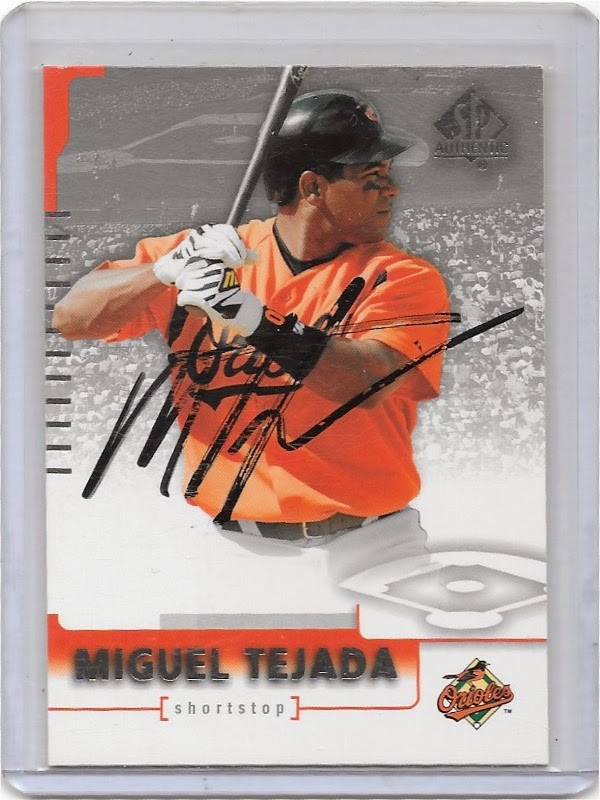 He falls in category 1 to the extreme, typically dealing only with super high end stuff and then just blowing out anything that doesn't sell for $50 or up.  Miggy's auto is a little inconsistent and there aren't many letters to it, so I'm less certain of its authenticity than the other uncertified autos I picked up.  But it looks like a decent IP autograph, and for a dime I'll take a gamble on an autograph of a former MVP.
Posted by Mark at 3:29 PM