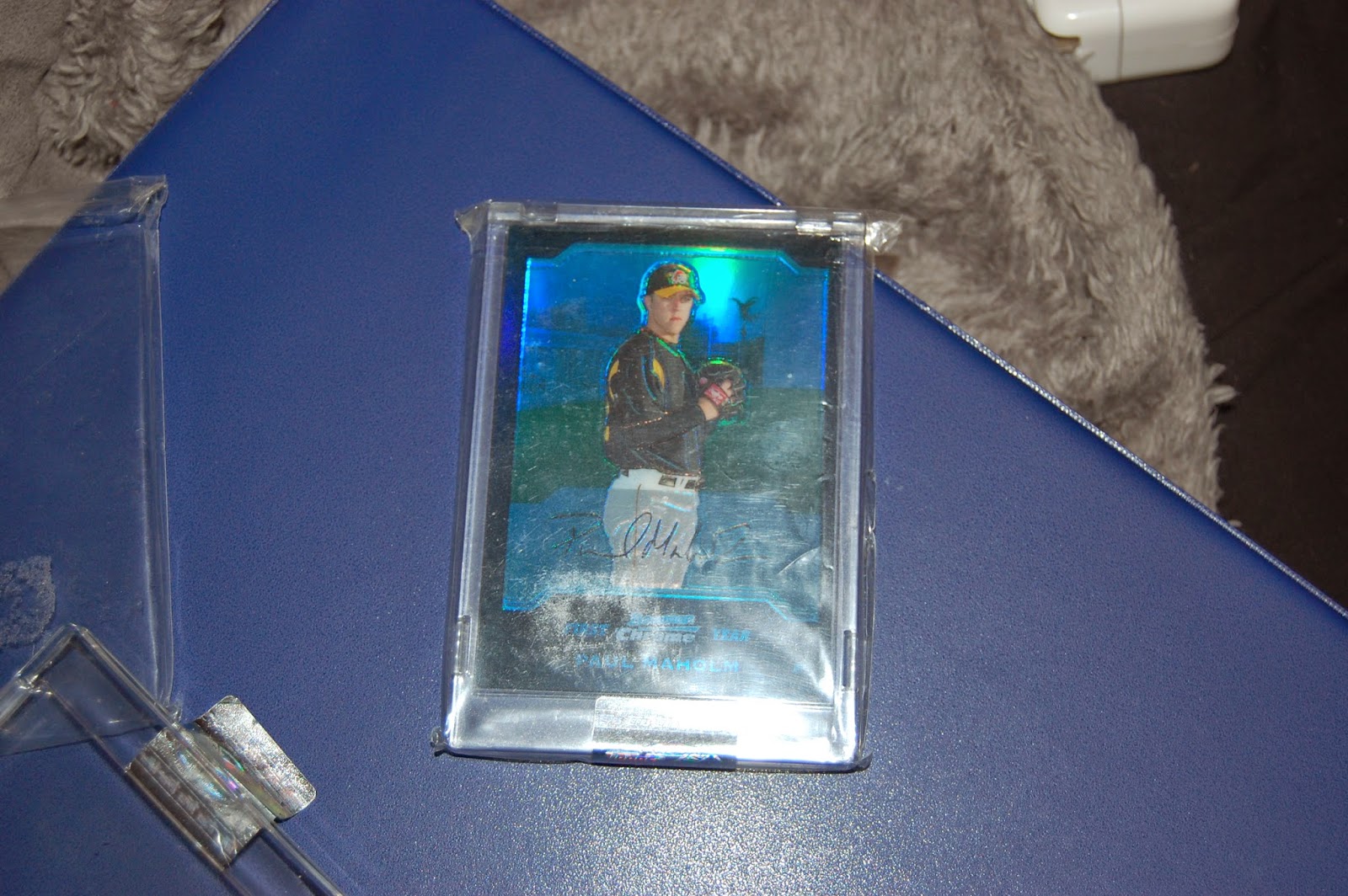 I spent some time this weekend tackling the massive undertaking of migrating my 13,000+ Pirates cards from boxes to binders.  The good news is that most of the work is done - I'm down to a 4 row box and two shoeboxes.  The bad news?  That also means most of the "easy" put-aways (base sets, inserts/parallels that I have a large number of) are already done.  The resulting mess is a pile of one-off sets, sets with only one Pirate card in them, oddball releases, and base sets that I might have 1 card in the entire 9 pocket page.

But I decided to slowly chip away at it again this weekend after taking a month or two break.  And one thing that quickly bugged me: Topps Uncirculated cards.

Remember the uncirculated fad, when Topps tried to cash in on grading without actually...grading anything?  The cards were distributed - usually as a boxtopper - in a hard plastic case sealed with a Topps holo-sticker.  The idea, supposed, was that these cards had never been circulated, going straight into the case from the factory.  Therefore, or so the logic goes, they are more desirable, or valuable, or higher grade.  Or some jazz like that.

The real end result?  Lots of pretty cards sealed behind a thick layer of plastic that was easily scratched, scuffed, and dinged.  And a card that had way too much room to move around inside the holder, and probably would have been better off inside a penny sleeve and toploader.

But ignore the Uncirculated holder for a minute here.  These are some cool looking cards!  But with my incessant need to keep cards in their original state, I had left the half dozen Uncirculated cards I own inside their holder.

If you're keeping score at home, the holders do not, in fact, fit inside a 9 pocket page.  Clearly something must be done. 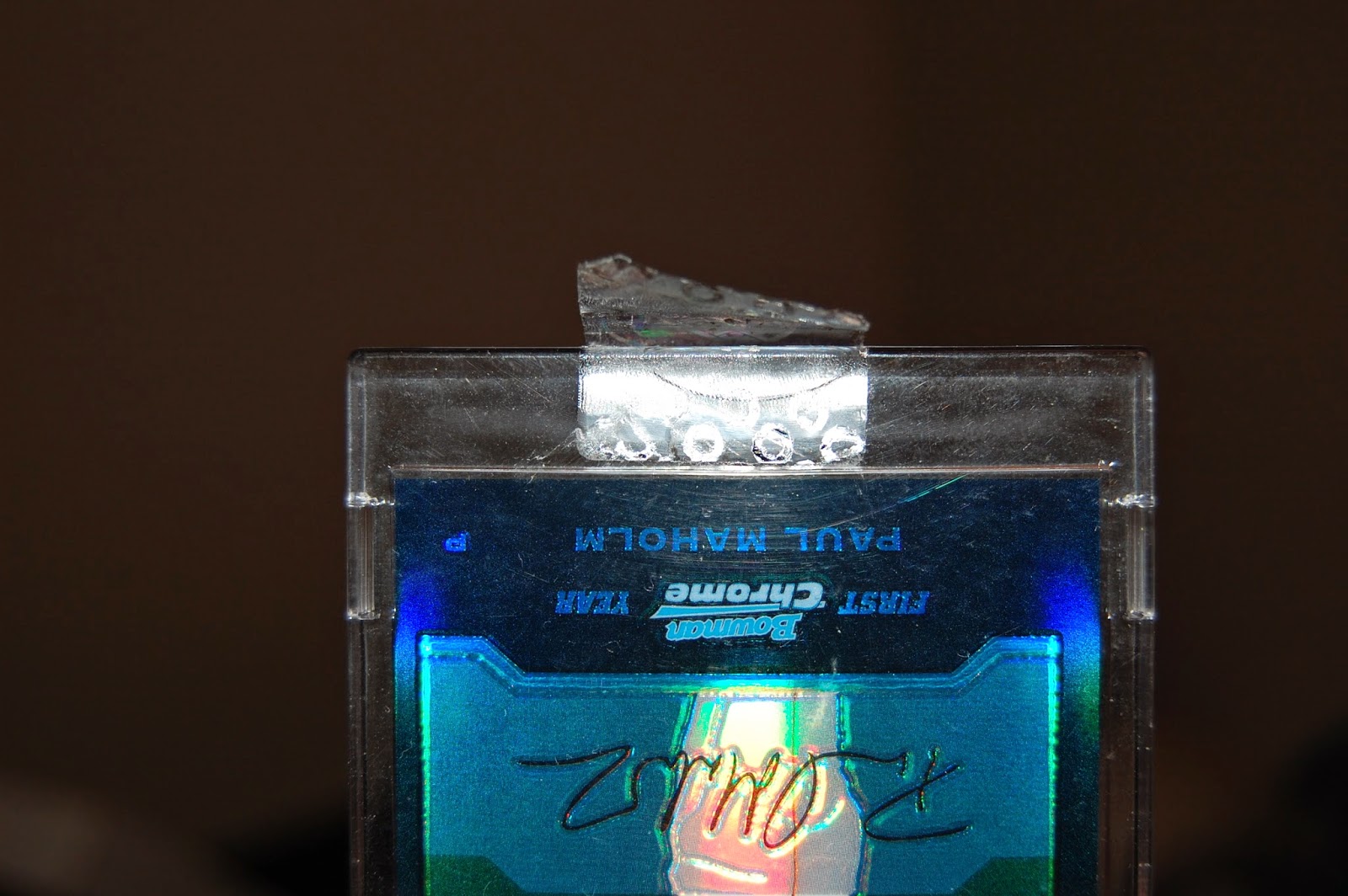 Part of the reason I hadn't made an effort to jailbreak these bad boys before was that Topps had done a pretty good job of making a case that was a real pain to open.  But a little online digging revealed that the pros at this suggested using a penny to wedge the case open, at which point the snapping tabs on each side would release. 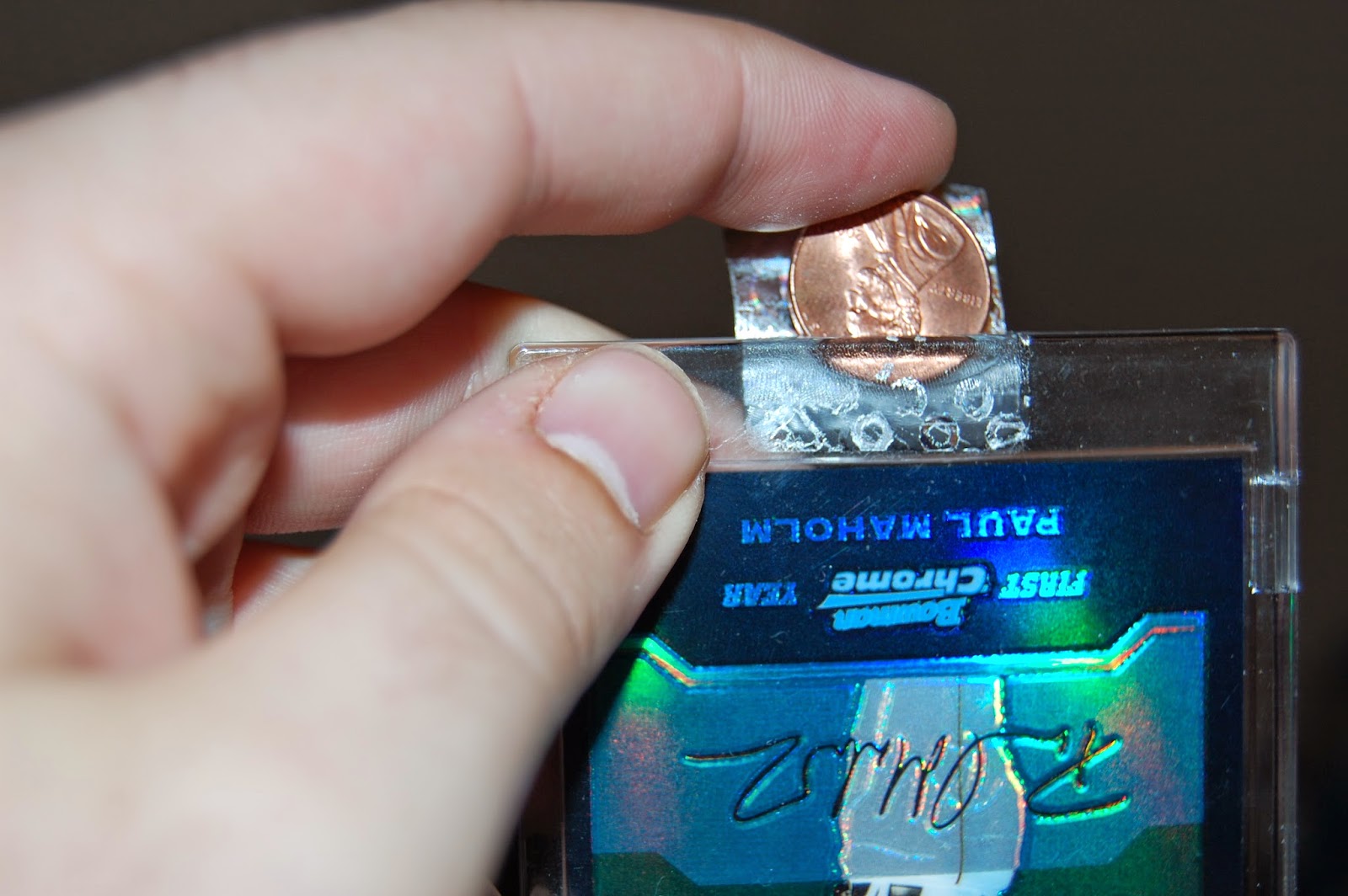 And the results were certainly worth the scraped up fingers that resulted.  The cases really put a damper on the refractor effect of the cards, presumable because less light is able to pass through the plastic case.  In particular, the 2004 Bowman Chrome Blue Refractors look amazing.  I've been a big fan of the blue ref since it was introduced into packs in 2005, but this 2004 version may actually be my favorite. 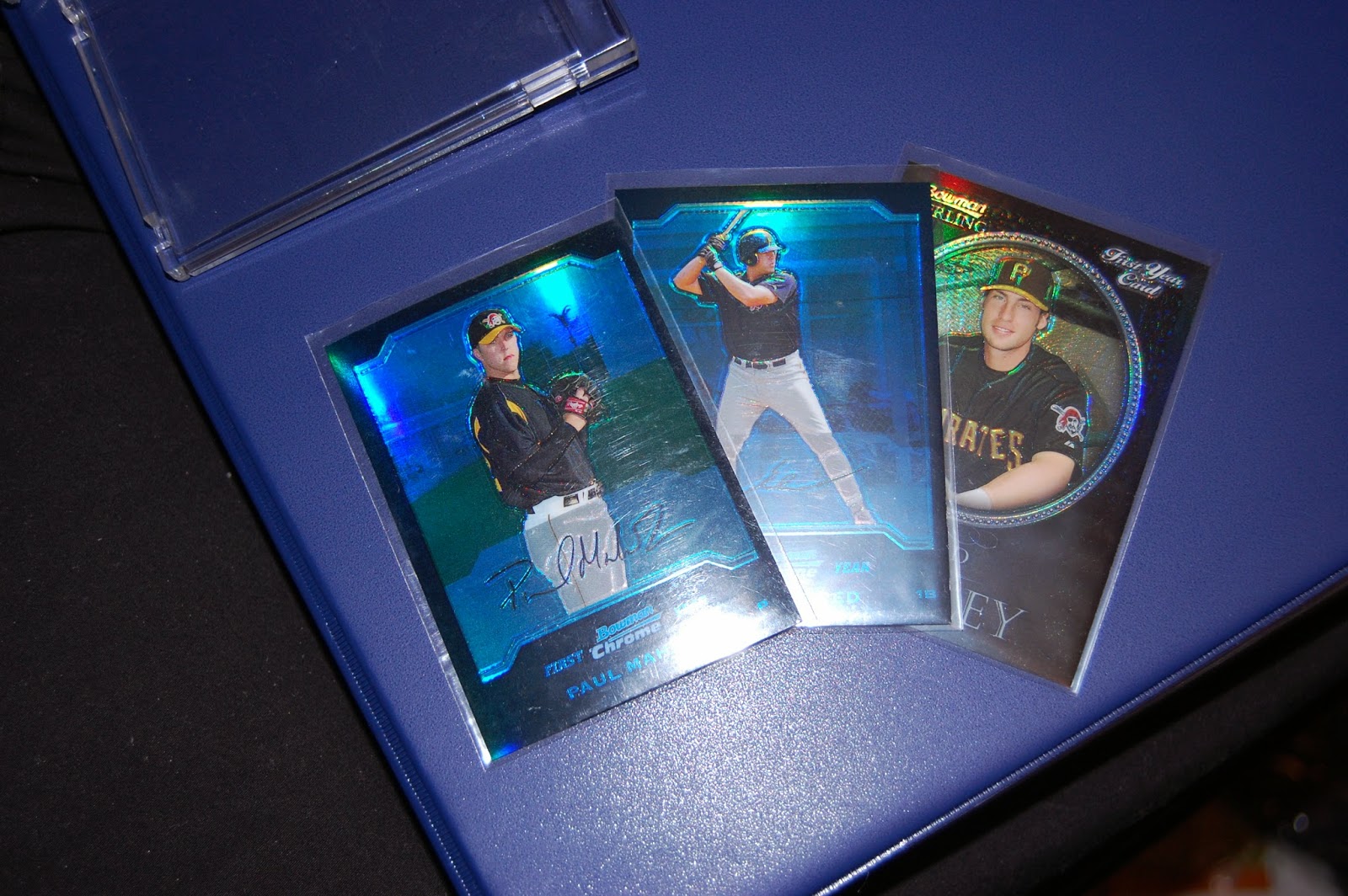 And the end result?  A win for card collectors everywhere, and a carnage of plastic cases.  As you can tell, the bulk of plastic majorly outweighs the actual amount of cardboard it was protecting. 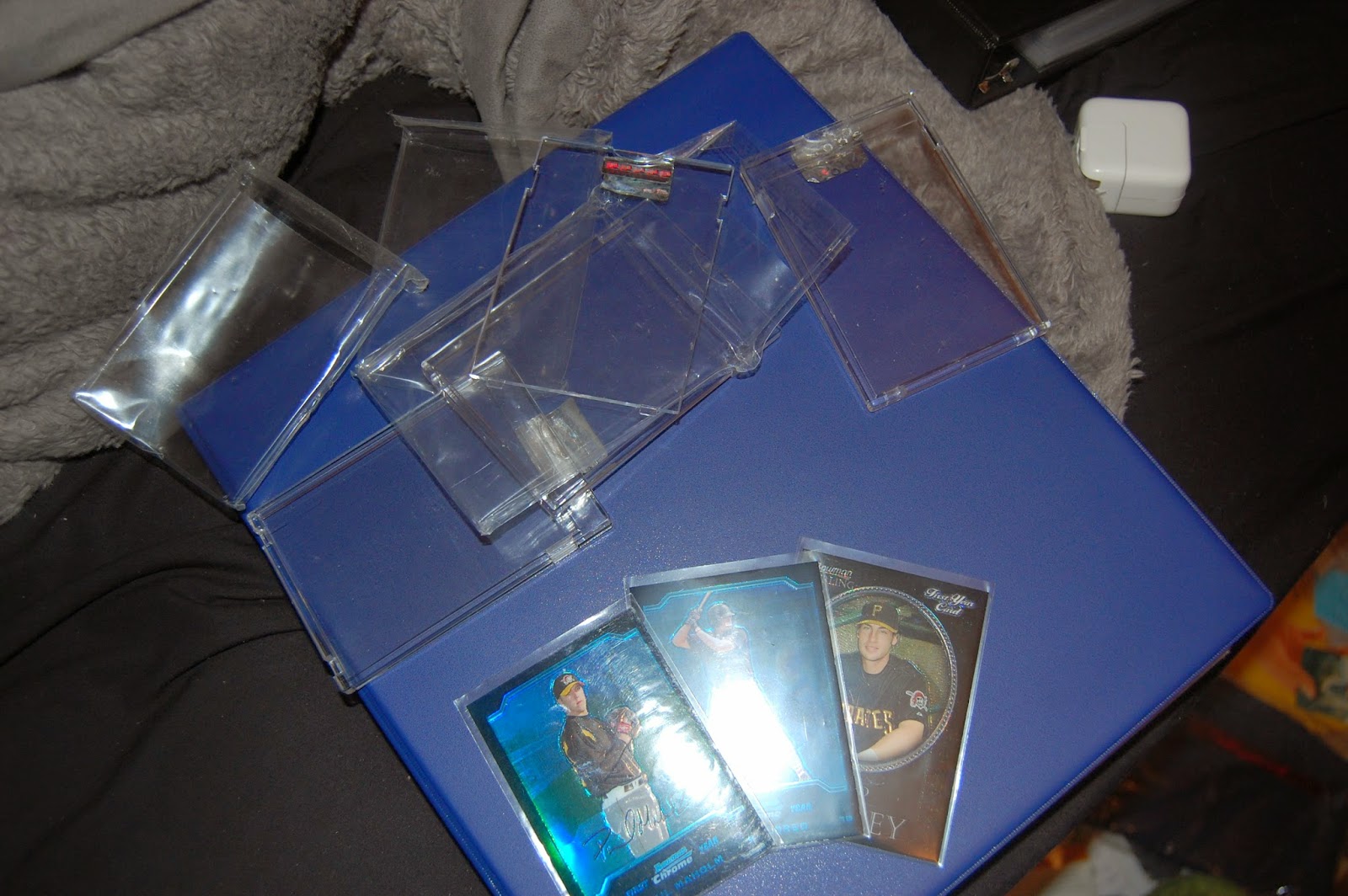 Now there are some great looking cards safely at home inside their binders, and I managed to clear out a few inches of space in those remaining boxes in the matter of a few short minutes.  All around a job well done, if I do say so myself.
Posted by Mark at 10:45 AM