From Junk to the Collection

I've said a few times that on the blog that I could probably skip card shows altogether.  Any time I go through the boxes of cards at my parents' house, I always come away with a new stack of cards I want to add to my binders.  I guess it's my collecting compulsion.  But it's apparently not just my dime cards that sometimes get plucked from the stack.

This J.A. Happ auto has been sitting in my trade/sell box for a couple years now.  I bought it at my former LCS probably around 2005, when 2004 Donruss EEE seemed like the coolest set on the face of the planet.  I paid $5 for it, and thought I got a steal since the card was numbered /50, while the rest of the EEE autos in the box were numbered in the thousands for the same price.  This was back in my unfocused, "buy anything that looks cool" stage.  Which...I still do now.  I just also have a 15,000 card team collection on top of it. 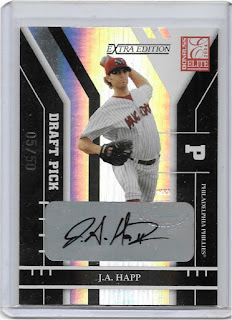 The Happ sat and sat.  It became a reminder of why I was turning my focus to my Pirates collection, hobby dollars pissed away on a card I had no use for.

When Happ had his breakout year in 2009, I eagerly dug the card out of a box anticipating listing it on ebay.  I waited and waited, hoping he might win ROY.  When he didn't win, I still held onto the card even though a few copies had sold for $25-30.

And then J.A. happed himself.  And the card sat.  And sat.  I tried offering the card in trade to a couple of Phillies bloggers a few years back.  I didn't care what they sent back - I just wanted to be rid of the damn thing, a reminder of a hobby oopsies.  Whether oversight or disinterest, none of them ever responded.

And then the Pirates, making a push towards greatness, decided in their infinite wisdom that the only way to plug AJ Burnett's role in the rotation was with his alphabetic antithesis.  Think of it as the Reverse Flash to the Flash.  And Reverse Flash JA has.  He bombed his first start, and it was announced his spot in the rotation will be skipped on this next turn through.

But finally this damn card has a place in my collection.  It knocks out one of my needs for my Pirate autograph project of getting an auto of every player to suit up for the Bucs.  I was tempted to dismantle the card and pillage the sticker for a Pirate photoed custom, but after all these years together I just can't do that to my good friend JA.  Instead I'll probably just buy a cheap sticker auto off ebay or COMC to repurpose.  But this guy?  It will be going into my "Pirate but not a Pirate" mini-collection featuring one-time Bucs in other stages of their careers.