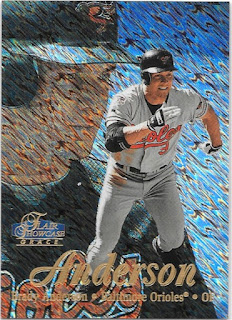 On Sundays, we take a trip into a random binder page from one of the 29 teams that aren't the Pirates...

Up this week are the Orioles.  As a kid whose baseball "coming of age" was in the mid to late 90's, the Orioles were one of my favorite teams.  Their color scheme?  Awesome.  Logo?  Unique.  Plus they had that Ripken guy.  And the Orioles were a loaded team in the late 90's.

Taking a trip to Baltimore to see a game was always at the top of my "where we should go on vacation this year" requests each summer as a kid.  It never happened, and I actually still haven't been to Camden to see a game despite it being a relatively modest 3 hour drive.  Guess it's something to add to the "one of these days" list. 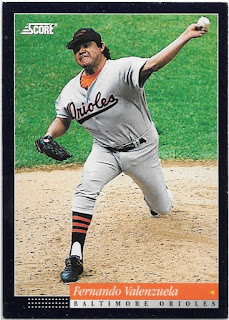 But the Orioles have remained a team that I still casually follow, and along with the Mariners are probably my favorite AL teams.  So my Orioles binder is a little thicker than most teams, desipite having pulled all of my modest Ripken collection into a separate binder with a few other mini player collections.

I love when I come across non-Pirate cards that hit more than one of my collecting interests.  I genuinely had no idea Fernando Valenzuela played in Baltimore, so this one was sure to make the binder as a short term stop.  But add in the throwback jersey back when throwback games were still a novelty and we have a surefire winner. 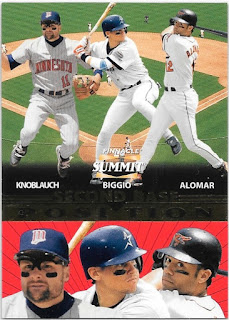 The same goes for this Summit insert.  It's lacking in star power compared to the trios you could have put together at other positions during that era, but not bad to have two Hall of Famers and one guy who forgot how to throw a baseball 50 feet.  I really like the cutouts superimposed over the diamond at the top of the card. 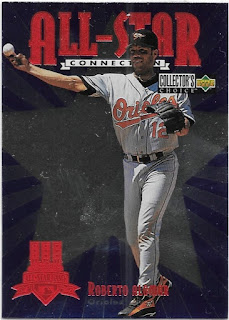 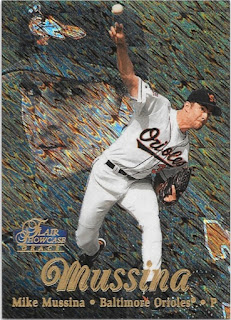 But the page isn't all 90's nostalgia.  This page covers a pretty nice timeframe. 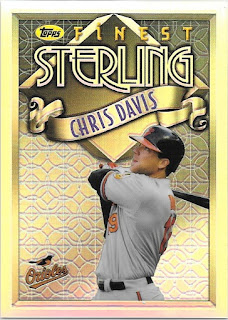 I really enjoyed the Finest retro cards that Topps put out for a few years.  It's always fun seeing modern players on classic designs (even if even that concept is starting to wear thin) and Chris Davis' light tower power has made him one of my favorite current players. 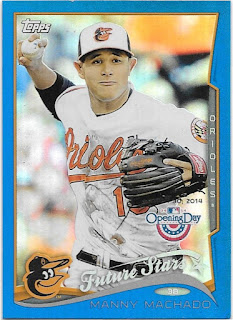 Of course the page wouldn't be complete without a little throwback love. 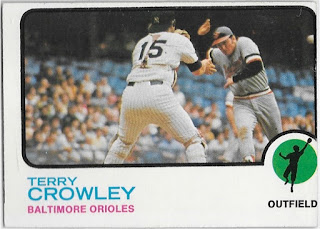 This card is one of my favorite photos on a vintage card.  Action shots were a rare commodity even into the 80's, but when they did pop up they're well worth the price of admission.  I love the cameo from Thurman Munson.  Somebody is going to get messed up real good on this collision. 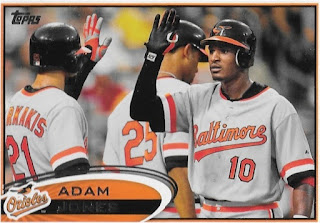 And to bring it all full circle, here are the same jerseys 40 years later.  Sans the collision.
Posted by Mark at 3:16 PM