Tito and My First Card Show

When my phone rang last night and I saw my dad was calling, I had a good idea why.  The first words out of his mouth were "Maybe you can help me remember something."  I didn't even need him to finish the sentence to answer.

"Yes, it was Tito Francona."

It was the summer of 2000.  I had just gotten back into card collecting after an extensive one year absence.  When you're 12, a year seems like a long period of time.

I had gotten a few packs of 2000 Topps for Easter, which quickly evolved into multiple trips each week to the local card shop 10 minutes down the road.  I think it's there that we learned about a card show that was coming up at a local ice rink.

The date was circled, and anticipation built.  I had started feverishly collecting Dan Marino a couple months earlier, and was excited for the wonders that awaited.  My only frame of reference was photos of card shows I had seen in Beckett.  Hundreds of people, rows and rows and rows of dealers where you could find any card you had spent weeks drooling over in the latest Beckett.  Yeah, that was the National.

We got to the show, paid a nominal admission fee, and walked into...a dimly lit ice arena with a few dozen dealers and quite possibly fewer buyers.  I learned years later that this ice rink show had been a major show earlier in the 90's.  But that boom had faded, and as far as I know this was the last show held at the venue.

We walked by tables asking if anyone had Dan Marino cards without much luck (or at least prices my mom was willing to spend on a hobby I had picked up a couple months earlier).  Towards the side of the venue, someone, probably the promoter, approached us and asked if we wanted an autograph from Tito Francona.

My dad looked at me and asked if I wanted his autograph.  I was 12, and I couldn't have told you Tito Jackson from Tito Francona.  Neither of them registered in my world.  But my dad pushed and said he was one heck of a ball player.  And with typical 12 year old deadpan, I was still unfazed. 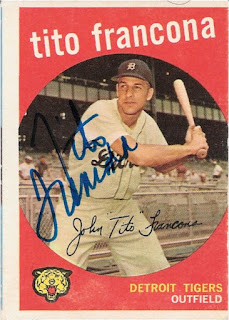 There was no line, and we walked right up, handed him a baseball card that my dad had run to a nearby table to buy, and had it signed.  I'm pretty sure my dad was the one lit up like a 12 year old, talking to a player from his childhood.

As soon as my dad called, I knew what he wanted to ask.  Was that Tito Francona we met at a card show?  He gushed over the phone just as excitedly as he did almost two decades ago - "he was one heck of a player, I think his son played too."

I still have everything from that show.  My first show.  The Tito Francona autograph.  A Dan Marino pennant and a Starting Lineup figure, the only Marino items we could find.  And a team set of 2000 Fleer Tradition, a few of which would get autographed at future autograph signings.

My dad said next time he's over he'd like to see the Tito card, and some of the other autographs we got together at Piratefest and when he would take me to games.  And then it'll be my turn to gush like a 12 year old, showing off my baseball cards to my dad.