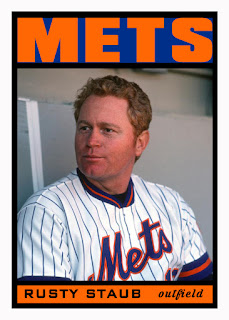 I've always enjoyed playing the "what if?" game when it comes to sports.  What if the Pirates hadn't selected Clemente in the Rule 5 draft?  What if Ryan Leaf had been picked ahead of Petyon Manning.  It's an endless rabbit hole to explore.

And the same applies to cardboard.  What if Topps had made a 1997 Traded set.  What would a Mark McGwire Cardinals card have looked like?  What if they hadn't phased out manager cards through most of the 90's?

So seeing mockups of designs that never made it out of the design room opens up a world of possibilities.

In my first attempt, I brought to life what was likely a 1972 Topps mockup.  There were some interesting challenges.  The reference photo was black and white, leaving a lot of room for guessing on the color scheme.  And the photo was fairly small.

This time, I decided to take a crack at what is likely a 1974 or 1975 Topps mockup.  The Berra photo is similar from one in the 1973 World Series program.  So there's a good chance the photo was available was they would have been preparing the 1974 set in mid '73. 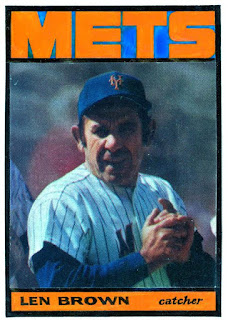 In my first try, I matches the neon colors used in the photo.  It's definitely a design that catches your eye.  But it's just a mockup.  Maybe the artist didn't wasn't aiming for the bright neons, but just happened to have some markers in those colors handy.  For comparison, I also tried out a version that used the colors from the team's color palette, which is at the top of the post.  It's a little more reserved and works really well with the Mets colors. 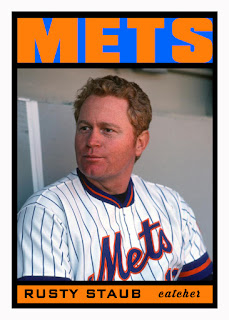 But the challenge with recreating these designs is imagining what the design would look like if spread across all the teams.  There's definitely some guesswork involved.

Going off of the team color style, I played around with a Lou Brock. 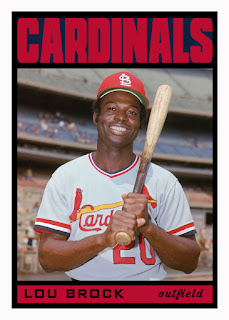 Even though they had switched to power blue uniforms, the Cardinals logo still retained the signature red and dark blue.  The color scheme didn't work nearly as well with the dark blue bleeding into the black background. 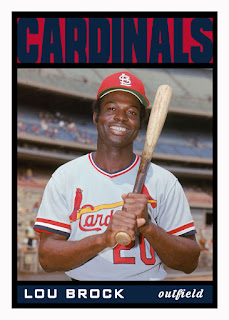 And inverted you get the same issues at the bottom of the card.

So what about pulling the colors directly from the 1974 Topps design, which fit the theme of muted neon colors that would be used for accents in '73 and '74 before getting the full border treatment in '75? 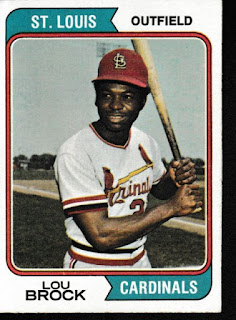 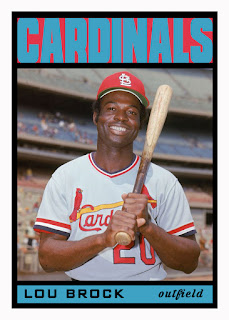 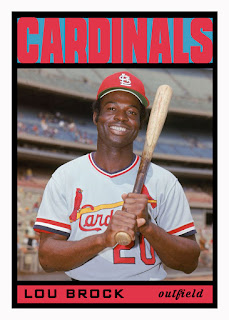 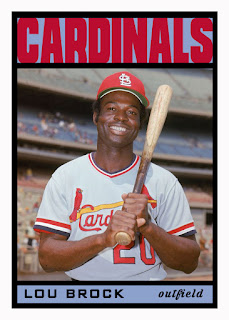 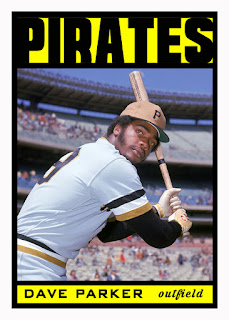 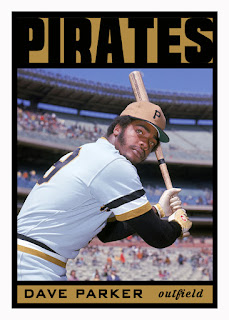 Just for good measure, let's take another look at a team in the same situation.  The Pirates 1974 cards featured a fairly vibrant yellow, even though the team was wearing their famous mustard colored hat and jersey accents at the time.  The bright yellow is too loud for my liking, while the mustard-gold just seems like a natural fit.

I don't know much about printing processes from the time.  Was it more difficult to print in the nuanced colors we get today?  The Pirates mustards definitely come out more yellow on Topps cards from those years.  So maybe Topps was just working with the primary colors available to them.  I'm not sure.

But I can pretty safely say that if the set had been produced, I definitely prefer matching to the tones of the jersey.  So there you have it.  What do you think?  What color combo works best?  Would this design have been more iconic than the rather drab '74 design?