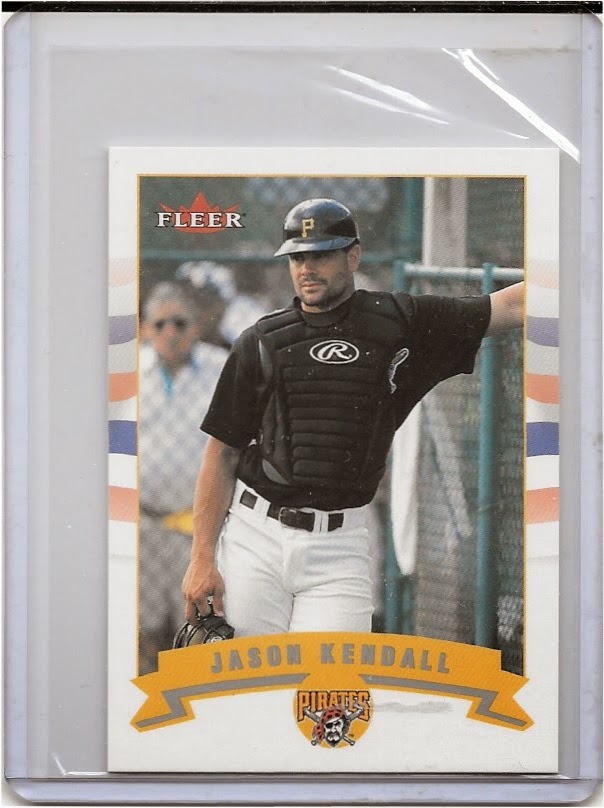 I think everybody has that one card on their want list that just seems unreasonably impossible to find.  The mystery only intensifies the hunt.  Where could they all be?  Tucked away in personal collections?  Sitting in the boxes of some dealer that who doesn't use ebay on the other side of the country.  Or little Timmy, whose mom bought him some retail packs that have been stuffed in the garage for the past decade.  Or maybe, just maybe, some fluke printing accident destroyed all of the cards, or they were never packed out at all.

A little paranoid can go a long way for collectors.  Right near the top of the Captain Ahab list is 2002 Fleer Mini.  A lot of collectors probably don't even remember 2002 Fleer.  In 1998, Fleer rebranded their flagship line Fleer Tradition.  I'd assume the rebranding was inspired by lagging sales, likely following the frightening design of the 1995 set and the nearly identical, gloss free releases in '96 and '97.

Fleer Tradition was the flagship brand from '98-2001.  But in 2002 Fleer released a Fleer Tradition set pretty similar to the two previous releases, and then also introduced a standalone Fleer set.  It's a tossup which was the true flagship issue, but my money always went towards Fleer, while Tradition felt more like the a bad Archives knockoff.

Fleer's 2002 set was pretty straightforward, except for the weird parallel configuration.  The set had gold backed parallels, making up 15% of the print run, that were distributed in packs mixed in among the base cards.  The Tiffany parallel was a glossy parallel numbered to 200 in Hobby packs.  And the lowest numbered parallel of the set, Minis, were numbered to 50 and distributed exclusively in Retail packs.  Yep, the rarest insert goes straight to retail.  Oh, 2002.

Simply put, the Mini's are rare squared.  Whatever copies may have been pulled have probably largely gone to casual or non-collectors.  And while they are minis, the scan above gives you an idea that the cards aren't really all thaaaat much smaller than the base cards - maybe about 2/3rds the size.  Easy enough for a casual collector to dismiss.

Completed auctions on ebay are rare, and I have never seen the Jack Wilson from the set listed anywhere.  I was lucky enough to snag a Tony Clark a few months back.  But I was downright floored when I saw a Jason Kendall sitting on Sportlots.  Better yet, it only ran me a mere $3.50 shipped.  It may not be the flashiest parallel out there, but I'm thrilled just to snag one of these.  I wouldn't mind coming across the Jack Wilson one of these days as well...
Posted by Mark at 11:19 AM