Ending the Year in Style 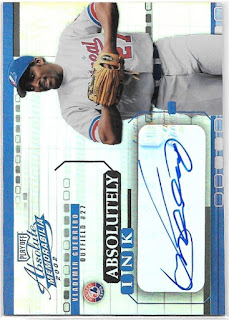 I'll be settled in watching some college football all day today.  I've never been a big New Year's guy, but there probably aren't many who are happier to see 2015 turn into 2016 than this guy.  And while this year has been a roller coaster for my blogging, including a disappearing act for most of the year, let's send 2015 out in style.

In my COMC package from their Black Friday sales, I nabbed a couple big additions to my collection.  I was able to spear a couple cards that at one point topped my want list.  And there's no sweeter feeling than that.  But first up, I may have a addition to my favorite cards.

Vlad Guerrero has long been one of my favorite players.  I still vividly remember a game against the Expos where a friend and I were sitting in the seats directly behind home plate and being amazed by how big and athletic Vlad was up close.  At his prime, I don't know that there was any player more interesting to watch in my lifetime.  He could do it all.

I've been looking for a Vlad auto for a while, but haven't pulled the trigger.  But as I was browsing through a seller's sales, I saw this card for $8.  It was an impulse buy, but one I'm glad I made.  The sticker auto doesn't look so bad on the awesome foil stock, and I'm glad I was able to get a card that pictured Vlad in his Expos road uniform. 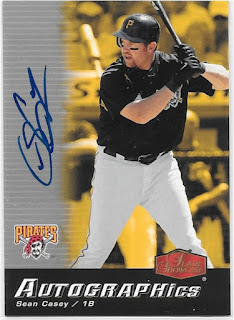 But the real gem?  This guy.  This Sean Casey auto is his only picturing him as a Pirate, and is insanely hard to find.  Before my Pirate collection went full scale, I was working on just getting an auto of every player who had a Pirates certified auto.  And aside from a couple high priced Heritage Real One autos, I had them all.  Except this one.

And after years and years of looking, I had only seen one copy that was already in another Pirates collector's hands.  I nearly lost my mind when I saw a copy had been recently added to COMC during one of my routine mid-week searches.  Better yet, it was listed for a whopping $1.25.

I couldn't click buy fast enough.  It may not be a huge value card, but man does it feel good to spear a card that has been near the top of my want list for a full decade now. 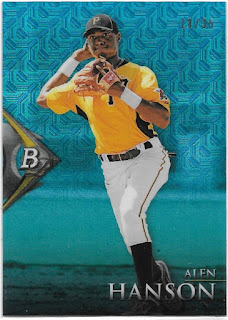 While the back story isn't nearly as compelling, I added a couple of these Japan Fractors.  They just look awesome.  End of story. 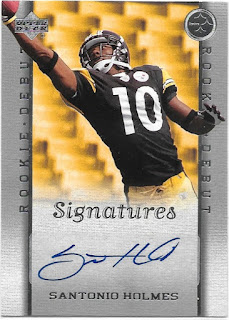 And my first Santonio Holmes auto.  Now I just need another one to turn into an awesome custom idea I have. 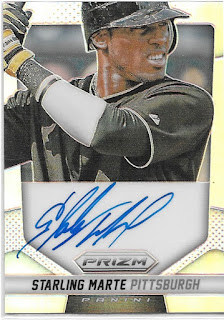 And for the third year in a row, Starling Marte autos continue to be very affordable on COMC.  I was able to snag this one for about $3.  On card and Prizm?  Yes, please. And despite the top side damage, this is just an awesome pickup for my collection.  My first tobacco card, and an awesome WVU card to add to my collection.  Amazingly I was able to add a card that is over 100 years old for a whopping $2.  The scan doesn't do the card justice - the gold on the card really pops in person, and has a slight fleck like quality to it. 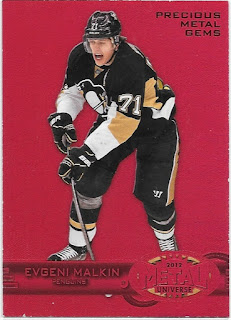 There is no such thing as a bad PMG. 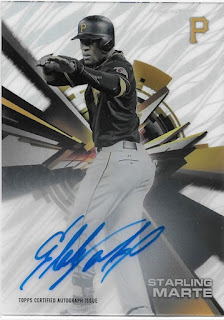 And more Marte!  This is, to date, my only card from the 2015 Tek release.  But I can only hope there will be many more to follow. 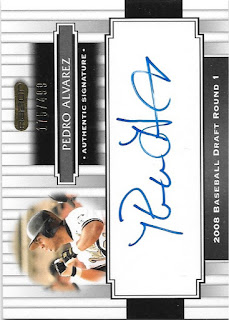 And last but not least, another former Most Wanted card.  At one point in 2008-9, this Pedro was at the top of my want list.  He was, after all, the future of the franchise and his Razor cards were his only autograph releases.  I think they actually still are.

These cards have seen some major swings (and misses) along Pedro's career.  I think this officially counts as buying low, though.  The card cost me about $3.  At various points, they were selling for well above that.  But so the hobby pendulum swings.