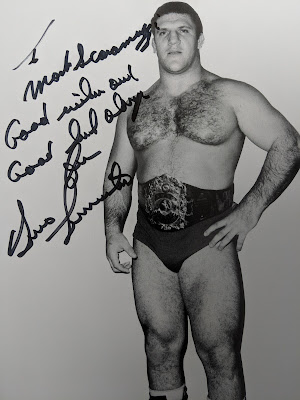 One of the amazing things about sports is the way that memories become like nesting dolls, one contained within another.  There's the story of the game - the late inning homer, the big putt, the perfect thrown pass.  But then there's our story.  Who we watched it with.  Where we were when we heard the call.  The memories WE make in our own lives over a sport.

Even when the outcome is predetermined.

When I saw the news earlier this morning that former WWF champion Bruno Sammartino passed away, it hit me like a ton of bricks.

Bruno is a Pittsburgh icon, not to mention one of the most well known wrestlers of all time.  But my connection goes far, far deeper than that.  Bruno's story is intertwined with my own, both close yet distant.  Bruno Sammartino came to the States in 1950 at age 15, where his father had already been since before the war.  In 1928, my grandfather came to Pittsburgh from Italy.  He was 17 years old, made the long journey by boat alone before joining his father, who had been here for a few years, in a dusty mill town outside Pittsburgh.

Before the days of selling out Madison Square Garden, Sammartino got his start on a small local wrestling show in Pittsburgh called Studio Wrestling.  The way my dad tells it, it was must watch tv for my grandparents, dad, and uncles.  It was about more than just wins and losses, flips and punches.  My grandfather worked construction, hard, backbreaking work that was supposed to lead to a better life than what was possible in the Old Country.  The neighborhood was full of Italian families, mostly from the same cluster of towns in Apulia on the eastern coast of Italy.  It's the little spur above the heel of the boot jutting out into the Adriatic sea.

Like my grandfather, many of the immigrants came to the States speaking little or no English.  They took jobs in the nearby mill or working construction, the wave of Italians instantly becoming the low man on the totem pole.  My dad insists he and his three brothers grew up wanting for nothing.  But life was hard, and pleasures were simple.  My Nana loved bingo.  My dad and his brothers played ball in the local fields, and whenever possible to go see the wrestling cards.

Bruno Sammartino wasn't just the main attraction.  Bruno was the embodiment of the hopes and dreams that brought them to America.  The American dream of opportunity.  The boy from the Old Country making good.  His success was, indirectly, their success.

Thirty years later, I made drives with my dad to the old neighborhood.  I was young - 4 or 5.  Most of the steel mills were long gone, though you could still see the impressive pillars of smoke rising from the mill near my grandparents' house.  The neighborhood had changed.  The main drag was filled with boarded up storefronts, gates over the windows.  My grandfather had had a stroke a year or two earlier, before I could remember.  He had lost the ability to speak or have much movement.  My only memories of him are feeding him cheese curls.

They didn't have the money for proper medical care, so the three brothers took turns stopping by once or twice a day to check in on their parents.  They were always in the living room at the back of the house, my pap in a chair and nana sitting on the couch.  The only things I ever remember being on tv was televised mass or wrestling.  Bruno Sammartino had long since retired, but I think the familiarity was comforting for them.

I remember being plopped in front of the tv with the KFC we always brought for them while my dad would probably be busy doing what they needed and cleaning up the house.  And that's where I fell in love with professional wrestling, or studio wrestling as it would always be for Nana.  I lost interest in my teenage years until I started watching again over the last couple years, but growing up all those hours watching wrestling with my grandparents made me a huge fan.

So for me too Bruno Sammartino meant something more than just a wrestling champion.  He was indirectly my connection to grandparents I never knew as well as I'd like.  And for a generation of Italian-American Pittsburghers he was the shining example of what the American Dream could bring them.  It makes me appreciate the hardship and sacrifices my family faced so that I can have a relatively comfortable life.  And even though he's gone, Bruno will always be my world champ.