Taking on the Roster 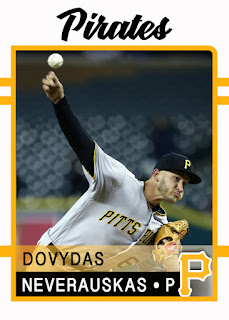 I wanted to show off the other little custom project I'm working on this season.  I'm a little surprised it's taken me so long to act on the idea.  I've kicked around the idea of creating a team set for a few years, and even actually made most of the cards for one a few years back.

To some extent, it's a no brainer.  I was so excited for Topps Total and Upper Deck 40-Man.  I loved the idea of getting into all the nooks and crannies of the team's roster.  As I was working through some custom designs for what ultimately became my #DocumentaryNOW project, I ended up with a couple different designs I liked, but didn't want to use for that project.

For DocumentaryNOW, I liked the idea of using a design that had a more vintage feel.  But for a living team set?  I thought a more modern looking design was a better fit.

I guess I took some cues from two of my favorite Donruss sets here - 1990 and 1991 Donruss.  I'm going to slowly work my way through this team set, trying to find the best possible photo for each player.  Some, like the Polanco below, might get recycled from DocumentaryNOW.  But how cool is a play at the plate in the SNOW?  That's not something you see on a card every day. 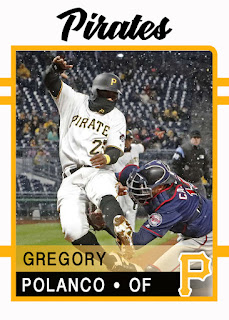 Even just taking my initial pass through the set, it's already clear that relievers are going to be trouble.  They don't get photographed much, and when they do the photos tend to be shots that are a better fit for a horizontal card.  My plans are to keep this set all vertical, which might result in some odd cropping.  We'll see how that goes throughout the season, and I may add in a horizontal design as well. 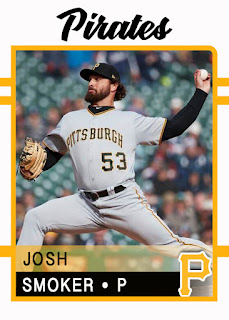 I'm also going to be making a Highlights subset, probably around 10-15 cards.  I'm still working on finalizing the design for that card, but I'm hoping to find a way to make it stand out from the DocumentaryNOW cards.  Even though they're technically two separate "series" I want to keep things as fresh as possible for my own stake if I'm going to keep this up for 162 games.

For those interested, Pirate DocumentaryNOW cards for the first 12 games are up on Twitter (you can follow the link earlier in the post).  We're still less than 1/10th of the way through the season, but I'm having a lot of fun with the set so far.

I'd love to hear any thoughts or feedback, and of course it's not too late if any other teams want to jump on the bandwagon!  If you have access to Photoshop and the most minimal skills to change text/photos, I'd be more than happy to help create the card template if anyone is interested in joining in.