I Went To a Card Show, Just Not the One I Planned 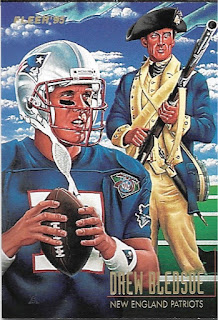 Sometimes the best plans are mistakes.  Or at least that's what I'm going to tell myself.  See, I was at the grocery store a couple months ago when a guy stopped me.  I recognized the face, but couldn't quite place him until he said, "you collect cards, right?"

He's one of the old school dealers in the area that only rarely sets up at shows, but I've bought off him at shows in the past.  He told me there was a show coming up in April - a small church show right down the street from my house that I've been to before.  April 7th.  My phone was almost dead, but I put it in my calendar.

Weeks rolled by and as we were coming up on this weekend, I realized the show was coming up.  Saturday was looking to be a packed day.  There was the card show and Kate had a roller derby bout.  The game wasn't until 7, but with setting up for the game and some things with ticket sales that she's involved with we were going to need to be out the door around 5pm.  I checked Beckett's show calendar to make sure I was leaving myself enough time for everything.

There it was, April 7th.  But the show was listed at a different venue about 5 minutes further than where I had though it would be.  Not a big deal obviously, and I assumed they had just switched venues.  I hopped in the car and headed over to the show.  It looked pretty unassuming when I walked in.  Maybe 10 dealers, only maybe half of which had anything even worth looking at as I scanned the room.  There was a guy who always has one table with about 20 signed baseballs, all well overpriced.  A video game/NASCAR diecast dealer, and a guy with tables of common Pirates bobbleheads I already have.  So those were easy passes.

But there were enough boxes that there was at least a good chance I'd be there for a few hours.  Oddly I didn't see the dealer who I had run into at the store who told me he was putting on the show. 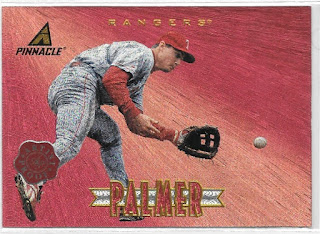 I'll be the first to admit that sometimes I buy out of sheer boredom.  I recently eclipsed the 19,000 unique cards mark in my collection.  It's tough to find cards at shows that I don't already have, and I often go in assuming the worst.  But it's usually made a little easier when you have an entire group of other team collectors to pick up cards for. 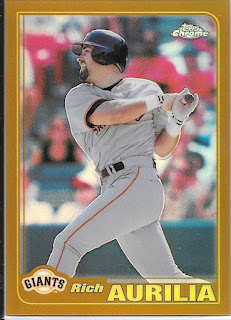 The first dealer I walked up to had a decent array of $.25 boxes.  Being out of collecting for almost a year means that a) I had the itch to buy cards and b) my stockpile of nicer stuff to send out to my other team collectors in our group has run pretty low.  I was able to grab some decent cards for the others at a good price, and also snag a few fun inserts for my own binders. 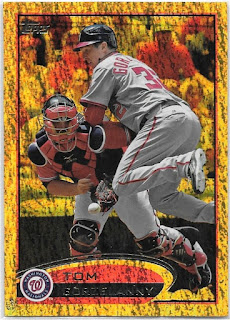 If you can't find current Pirates, the next best thing is a former Pirate.  And how often can you find a pitcher play at the plate card? 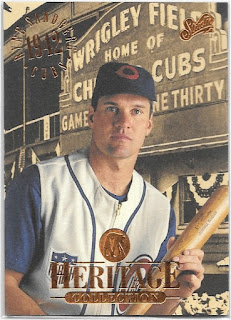 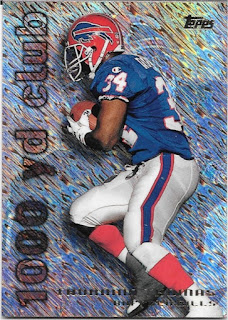 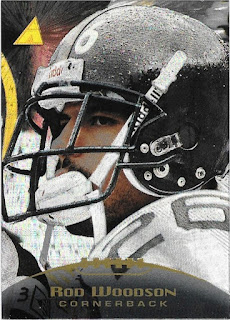 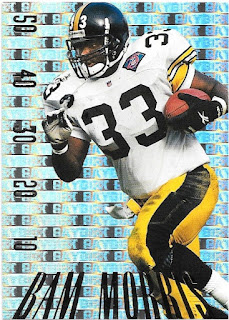 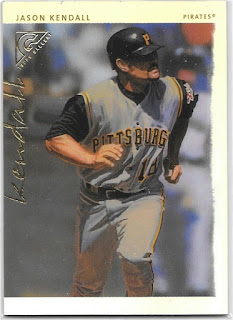 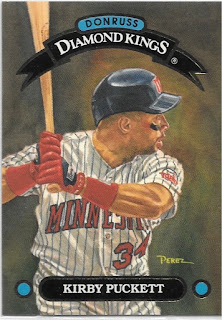 It's no shocker that when you find a seller with a good quarter box, you can usually bet that they'll have solid dime, $.50, $1, or whatever else boxes.  And while I didn't want to spend too much time digging, knowing that Pirates would be few and far between, I was able to dig out some fun cards for my binders. 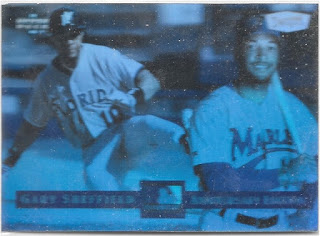 I found a great run of 90's inserts and higher end base cards.  The Denny's Grand Slam cards were some of my favorites of the era, and about the only reason I would voluntarily eat at a Denny's these days.  I saw on Twitter that Denny's is doing some sort of Star Wars card promo with Topps - $3 for a 2 pack?  Meh.

But if they bring back the holo cards, I'm all in. 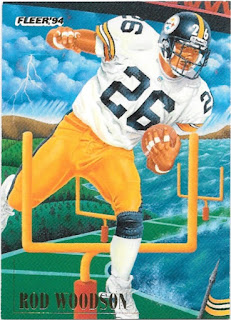 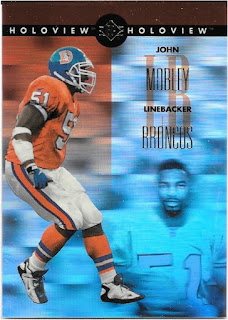 I get frustrated with modern cards because it gets tough for me to tell one year from another.  Show me inserts from Heritage or Opening Day and one year easily bleeds into the next.  I love how distinctive 90's cards are, but also how often they jumped through ideas.  Full borderless painted cards with some trippy themes from Fleer, and just a couple years you have some crazy holograms from UD.  The variety is what kept me interested as a collector.  And that's something that just feels like it's missing today. 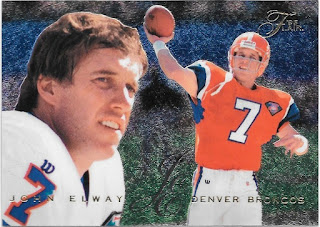 Most of my pickups were impulse purchases.  I picked up a few Marino cards for my collection, some Steeler dime inserts in addition to the ones above, and some cards from sets I might like to tackle some day like the '93 Diamond Kings insert set.  But overall it was pretty unfocused.

But I didn't spend all my time in dime boxes.  The same seller had some game used and autographs out at 2/$5.  Usually these boxes are a pass for me unless they seem to be pretty high quality, since most of those cards can be found on COMC for half the price. 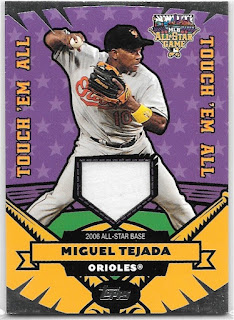 But as I flipped through the cards, I noticed this base relic from the '06 All Star Game.  I've been working on the game jersey insert from that year here and there since the game was hosted in Pittsburgh, and these base relics are a little tougher to come by. 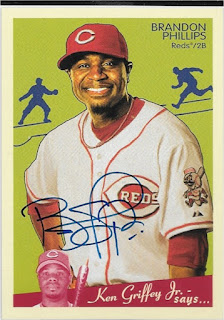 And with my burning itch to buy, what the heck.  I found a Brandon Phillips autograph for my second card.  When we were living in Ohio, I really gained a new appreciation for Phillips as a player.  I got to meet him at Reds Caravan event and got his Expos 2000 Topps RC signed, so this was a good excuse to add a Reds autograph to my collection.  The Goudey design is great, an on card auto, and maybe best of all the Griffey Says section isn't too distracting or out of place on the card since they're on the same team. 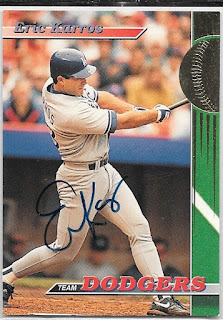 And keeping up the 90's nostalgia, I also plucked an Eric Karros auto for $1 from the same seller.  At one time this would have been a pretty hot card, but not today. 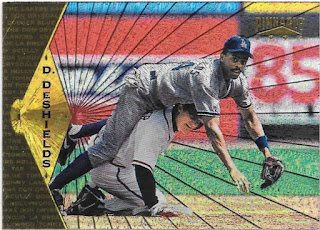 It wasn't a total shutout on the Pirate front.  I did find about half a dozen new cards, including this great Promo version of the 2005 UD Classics card. 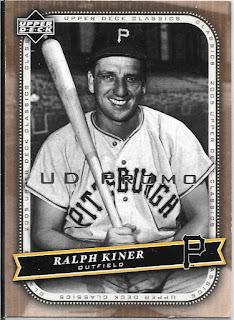 As I was wrapping up with the seller, I asked if he is doing any other shows coming up.  He said he has one on the 27th right down the road.  I asked if he knew where exactly it is.  And then he named the church where I THOUGHT the show would be.  Turns out the show was the 27th, not the 7th.  But there were two shows in the same month, 20 days and about 2 miles apart.  Talk about an odd coincidence.  Crazier yet, the other show isn't in Beckett.  So I probably would have missed it if I hadn't gone to the wrong show!

The rest of the tables looked like duds - either nothing worth buying or prices that weren't worth paying.  But I did make a stop at one table where a guy had some binders of autographs.  We got to talking and he is a local autograph hound. 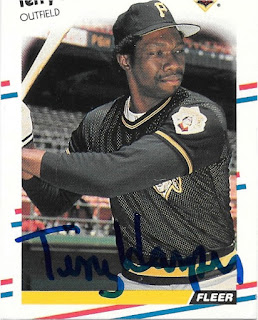 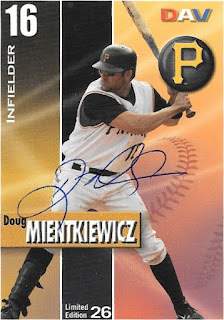 He primarily collects hockey, but also had some baseball autographs.  I told him I'm working on getting autographs of every Pirate player, and as often as possible in a Pirate uniform.  Turns out he's doing the same thing with the Penguins.  I've met some baseball collectors working on similar projects, but never anyone from another sport.

It was fun swapping stories of tough signers or the frustrations of trying to find a photo in uniform of a guy who may have only played a handful of games with the team.  Despite having a small baseball collection, I surprisingly came across two autos I wanted.  Terry Harper has been a toughie for me, and while I have a Doug Mientkiewicz signed 8X10 as a Pirate, I couldn't pass up adding a card.  At $5 the prices were a little steep, but neither are common Pirate autos.

As we were talking, I started flipping through his hockey autographs. 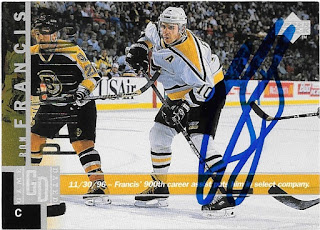 Mixed in with plenty of no-names were some cards that I couldn't pass up. 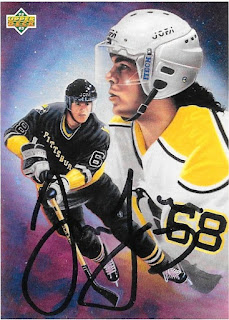 I know some people prefer not to deal with IP autos, and with the number of certified autos out there I can certainly understand that perspective.  But I usually feel comfortable buying autographs, especially when the signatures of lower end guys all check out and there's some provenance.  I felt confident with this guy's autographs that I was willing to take a chance, even if the prices were a little higher than I usually pay for IP autos. 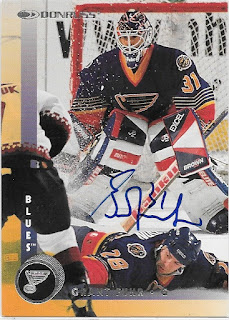 It didn't hurt that another collector I know in passing came up to tell the guy that he a Jerome Bettis auto he had bought from the dealer a few months earlier was certified by PSA before he gave it to his daughter as a birthday gift and that she loved it.

I ended up paying $20 on the 5 autos.  This is my 3rd IP Jagr auto and probably the most confident I am in any of the 3 being real with the backstory.  Jagr has played for so long and his signature is usually so rushed it's tough to be completely confident, but I'm happy with the pickups.

It was a small haul, but I picked up some nice additions to my collection.  I'm hoping at the next show I'll have a little more luck with Pirates and now that the itch to go to a show, any show, has passed I'll be a little more selective in my buying later this month.