The Other Side of the Move 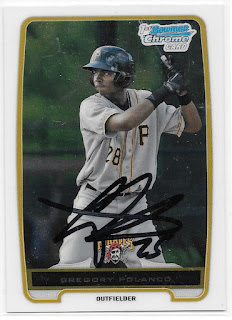 It's been a little over two months since we signed on the dotted line and bought our first house.  There's certainly been plenty going on to keep us busy, between working on the house, summer fun, and work.  Cards have been on the back burner, and that was probably long overdue.

For the better part of the past year, collecting had started to feel more like a chore than a hobby.  In 25 years of collecting, I don't know that I've ever had such a prolonged period of disinterest.  But it got to the point where my collection had become so spread out and disorganized that it was tough to enjoy the cards I had, and tracking down new cards just exacerbated the problem.

But one of the great parts of moving from a string of apartments to our very own house is the extra space.  While getting the basement fully finished may wait a little longer than I had originally planned, I've carved out a nice little card sorting area.  I have the space to sprawl out, get things sorted into binders and boxes just the way I want, and not worry about having it cluttering up the bedroom or living room like it did in the past.  I'll try to get a post up in the near future with my setup.  It's nothing fancy, but it's made a world of difference in making a dent in my collection.

I can't say I have the full blown bug again.  I was part of a group break of 2016 boxes with my team collector buddies, and snagged a couple dozen cards at flea markets this summer.  But I'm going to make sure I get myself better organized before I consider diving head first into adding new cards on a regular basis.

But that can't stop me from doing things with the cards I already have, right?  With all the house stuff going on, I've been pretty checked out of baseball in general.  But when I saw a Gregory Polanco signing on twitter that was right around the corner from my office, I couldn't pass that up.  After a 45 minute wait outside in direct sun on one of the hottest days we've had so far this year, I was able to get Polanco's Chrome rookie signed.  While I would have preferred a blue signature, I'm just happy to have one of my favorite recent Pirates cards signed.

Now that the unpacking is (mostly) done and my cards are a little more manageable, I'm hoping posting will fit back into my schedule.  I probably won't get back to my post-per-day rate that I once held to, but I'm planning on getting at least 2-3 posts up each week.

I'm looking forward to catching up on reading all of my favorite blogs from the past couple months and getting back into the swing of things.