How I Spent My Summer Vacation

I think this is the first time I have been able to sit down at a computer in the past week, not that I'm complaining.  It's been three years since I have lived in Pittsburgh (two in West Virginia, one in Ohio), and though there have been plenty of weekends home since leaving, there was always the looming finite date and time that I knew I would have to leave.  It's great to finally have the place I've always considered to be home actually be home again.

But it's still hard to get out of the "we have 2 days to do every single thing we want to do in the city" mentality.  So we kept plenty busy this week, between seeing friends on the 4th, blueberry picking at a local farm, and one of our favorite Pittsburgh hobbies - thrift store shopping.

Long before Macklemore made it seem cool (though with an awesomely sincere anti-consumerism message), I've been hitting thrift stores looking for whatever cool finds I could come across.  And with Pittsburgh being such a sports crazy town, it's surprising how few people scour thrift stores for awesome sports memorabilia.

Over the years I've been able to score some great stuff, as well as finishing off my collection of Pirates SGA bobbleheads (though I'm still missing AJ Burnett from this year).  But this week offered up a couple of my favorite finds of all time.  We also took a trip on Friday to Rogers, OH.  As much as it pained me to return to Ohio so soon (read: ever?), it boasts the largest flea market in the region, and was well worth the trip. 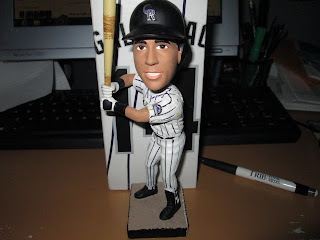 It's always a safe bet to expect to find a pretty wide array of black and gold related things.  I can't tell you how many Steelers tshirts from the two most recent Superbowl victories I see, or generic knockoff tshirts sold in the Strip.  Amusingly, for all the people that pay $7 for a "The Pittsburgh Kid" knockoff Neil Walker tshirt, they could likely find an authentic tshirt jersey at any number of local thrift stores for half the price. 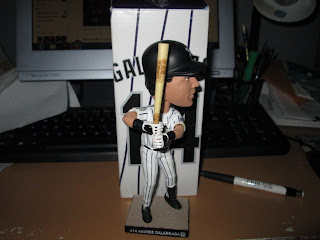 But the best finds are the ones you never expect.  Thanks to a collector in Colorado, I learned the Rockies are doing a series of bobbles this season to celebrate their 20th anniversary.  I don't care much for the current Rox teams (in large part due to Jim Tracy), but growing up in the 90's, it was easy to fall in love with the 4 expansion teams in the decade, and the towering homers flying out of Coors Field.

Sadly, one quick search on ebay made it pretty clear none of those Rockies bobbles would find their way into my collection any time soon at current prices.

So I was pretty surprised to find this guy tucked in a shelf in Goodwill along with an array of nicknacks.  I've love to know what the story behind him is - a Rockies SGA in the middle of Pittsburgh?  And during the same season it was given out?  Perhaps an unappreciated gift from a visiting relative?  Unwanted souvenir from a vacation?  Either way, for a mere $4 it will find a nice home in my slowly expanding collection of non-Pittsburgh bobbles.  Maybe with some luck I can snag the Larry Walker and Dante Bichette bobbles at a decent price sometime.

The same Goodwill also offered up a couple $1 video game finds.  I'm not much of a gamer - my PS3 is more accurately described as a Netflix player - but I do enjoy playing older sports games with outdated rosters.  How can I not be excited to play with Kordell Stewart and Kendrell Bell? 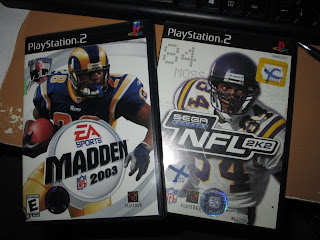 And the thrifting trip wouldn't be complete without a Steelers jersey.  In a football crazy city, people go through jerseys like the regular person goes through toothpaste.  And to be at the pinnacle of your yinzer fandom, you must always have the most current jersey of the player who you like, but isn't so popular that anyone else in the entire stadium would ever possible want to wear his jersey.

That's probably why I can still find any number of Jeff Reed jerseys on the thrift racks.  But hey, sometimes it works in my favor. 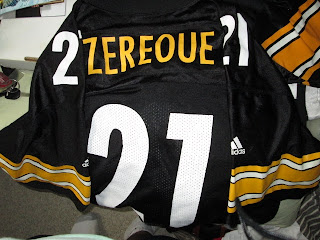 This beauty made my day.  Most people probably remember little to nothing about Amos Zereoue.  But Famous Amos starred at WVU before being drafted by the Steelers.  The local connection undoubtedly helped, but he quickly endeared himself to Steeler fans as the small, quick alternative to Jerome Bettis rumbling ways.  Most RB's have a short shelf life, but Amos was one of my favorite Steelers in the early 00's, and probably not a very common jersey.  Add in the fact that it's in great condition, with no signs of cracking in the screen printing, and I'm thrilled.  I've compiled a nice range of jerseys over the past few months of thrift shopping - Tommy Maddox, Duce Staley, Famous Amos, Kendrell Bell - so I can't wait to break them out on gamedays this upcoming season.  I'd much rather be sporting one of these more vintage jerseys than trying to be unique in my David DeCastro jersey.  But hey, that's just me.

Up next:  A terrifying large flea market drags me back into Ohio. I survive unscathed, but my wallet does not.
Posted by Mark at 9:37 AM No comments:

Back in Black (and Gold)

After a couple crazy days, my feet are firmly on Pennsylvania soil, and the pain in my back is starting to ease up.  I guess Ohio had to offer me a couple last kicks on the way out.  Eating out our last two nights at Buffalo Wild Wings and a local pizza place I had the two worst dining experiences I've ever had in terms of service, including a 2 hour stay at BWW where we spent an hour and a half waiting for our food (the waitress waited on 3 tables that were seated after us before coming over, and then apparently forgot to put our order in the system for about 40 mins).

If that wasn't enough, Uhaul called to let me know that we would have to drive an hour north to pick up our truck.  Add in a nonstop drizzle of rain for two days, and I can safely say I will be avoiding long distance moves at all costs unless I hit the lottery or the job is paying for professional movers.

Buuuuut...my cards are all safe and sound, all furniture made it without any scratches or dings, and we got through the whole stressful process without killing each other or anyone else (even the BWW waitress!).  The only down side is that it may be some time before I start shifting through the mountain of white boxes that is my collection.

So no, no pretty pictures for the moment.  I owe some folks trade packages, which I was smart enough to put in one clearly marked box, so hopefully those will hit the PO this week.  Now that the stress of unpacking is over, time to kick back, relax, and enjoy the holiday weekend.