To most the MLB draft isn't much to write home about.A large portion of the players will never reach the high minors let alone the big leagues.  But there's just something about the promise of the future that makes the draft must see tv for me.

Maybe it's a byproduct of being a Pirate fan for many years when the draft was our best and only hope.  Barren farm system, terrible team - the draft held the hope of the next Bonds or Bonilla.  Or maybe I just have a baseball problem.  I loved listening to the draft when it was still just a live conference call, and the first round would fly by in about 20 minutes.  I could do without the added false build of drama, but it's a fair trade for...moving pictures.

My Pirate fandom is littered with the latest, greatest hope that never made it.  My Bobby Bradley and Chad Hermansen cards are reminders of what can, and can't be.  But it's been nice to see some big time hits come out of the draft for the Bucs in recent history.  With the Pirates first pick coming up in a few minutes, it'll be fun to see the latest chip to be added to the farm system.

The card show dime box dig lives on, largely due to my inconsistent posting over the past week.  But we're (finally) getting into the good stuff.

When you come home with a few hundred cards for your miscellaneous collections, there are bound to be a few common themes here and there.

I'd like to think I don't have as many active mini collections as some in the blog world.  But that's probably called denial.  The Skylines insert set was one of my favorites growing up, but good skyline shots are hard to find on cardboard aside from a few select sets.  The Granderson was a $.05 box find that I had to grad when I saw the skyline background.  Maybe I'm in the minority, but I'd gladly take National Chicle back if Topps ditches the over-run A&G or Gypsy Queen lines. 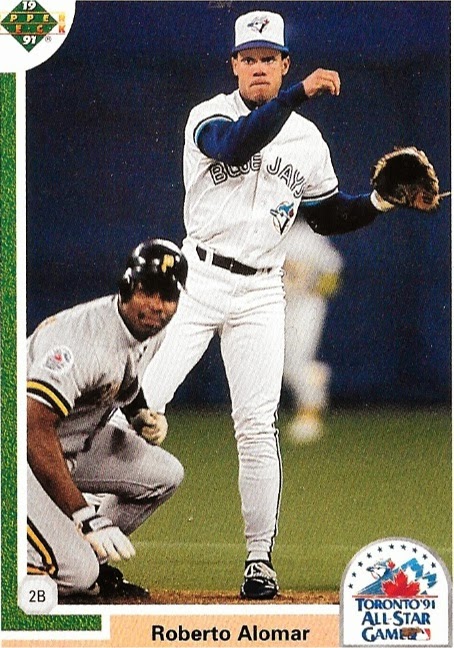 It hasn't reached full mini collection status, but Pirate cameo cards are quickly becoming something that regularly end up in my pile.  The fact that this Bobby Bo cameo is from the all-star game is just an added plus. 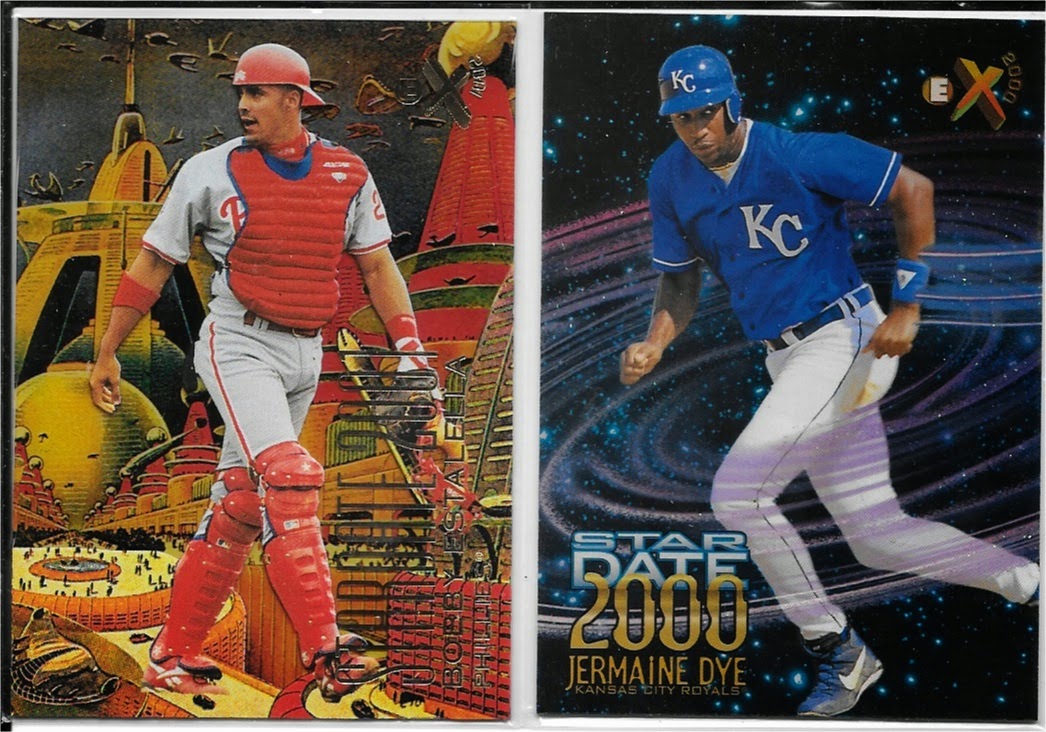 Other cards didn't fit into any specific collection, but were just too cool to pass up.  The card on the left has a weird layered effect, with the player photo set on top of the weird 1950's sci fi movie background.

And who doesn't enjoy some simple reminders of baseball history. 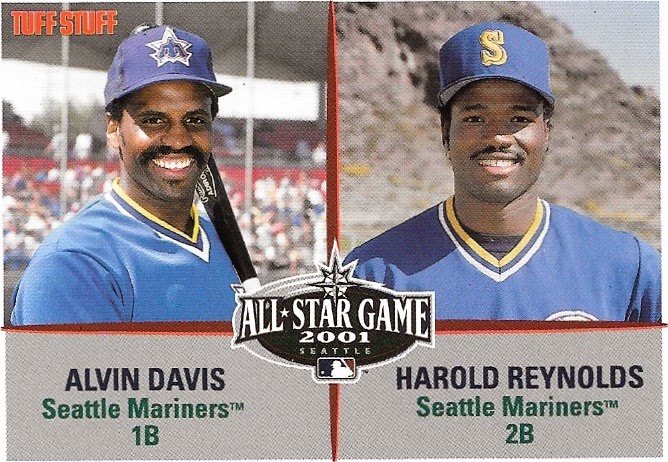 The best part of digging through dime boxes is finding the weird and unknown.  I didn't think anything of Harold Reynolds would ever warrant inclusion in my collection, but this Tuff Stuff oddball was a surprise find.  I haven't taken the time to dig up any info on the card, but I'd imagine there are more popular pairings from Mariners history. 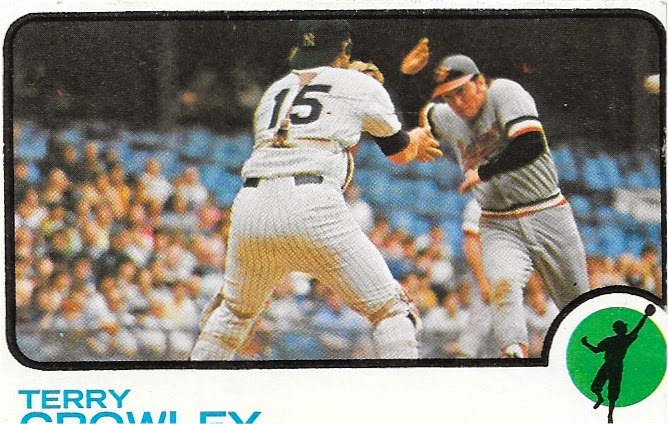 I don't have the play at the plate love that some do, but this photo is an absolute gem from days when Topps was still using cheesy posed photos on most of their cards.  I absolutely love the cropping on the photo, just barely capturing the ball coming into the frame from the right. 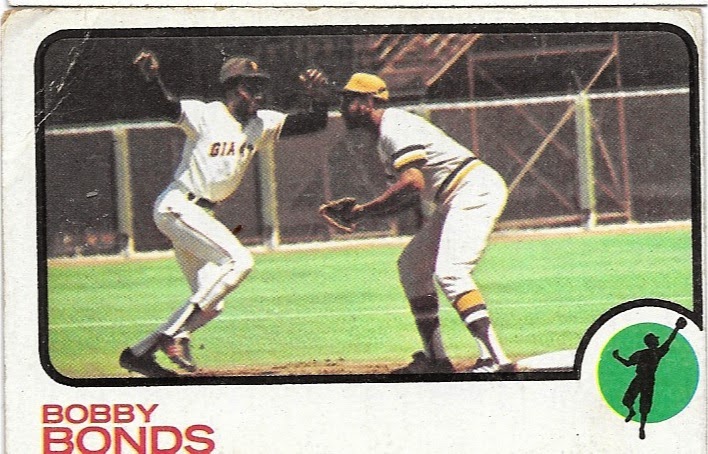 This other action shot from '73 is a little less exciting, but a Stargell cameo more than makes up for it. 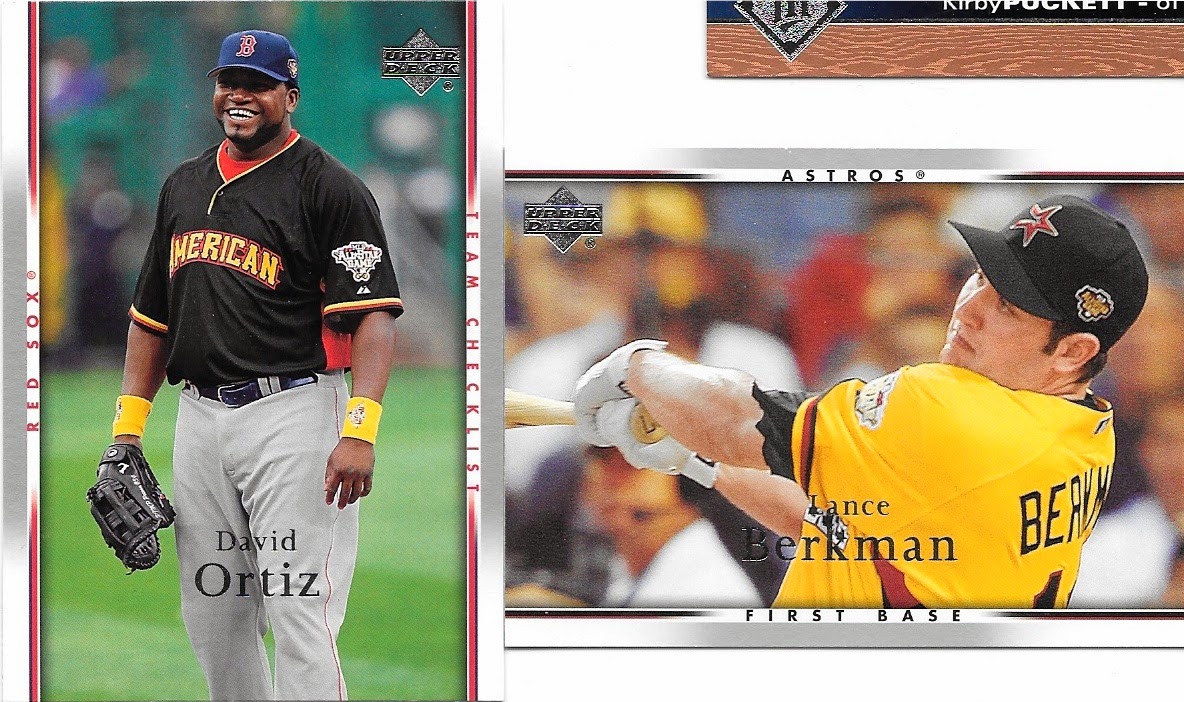 Other additions were a little more mundane.  I'm amazed I still manage to find new cards capturing the 2006 all-star game.  It may be something I need to put a little more effort into researching prior to my next justcommons purchase. 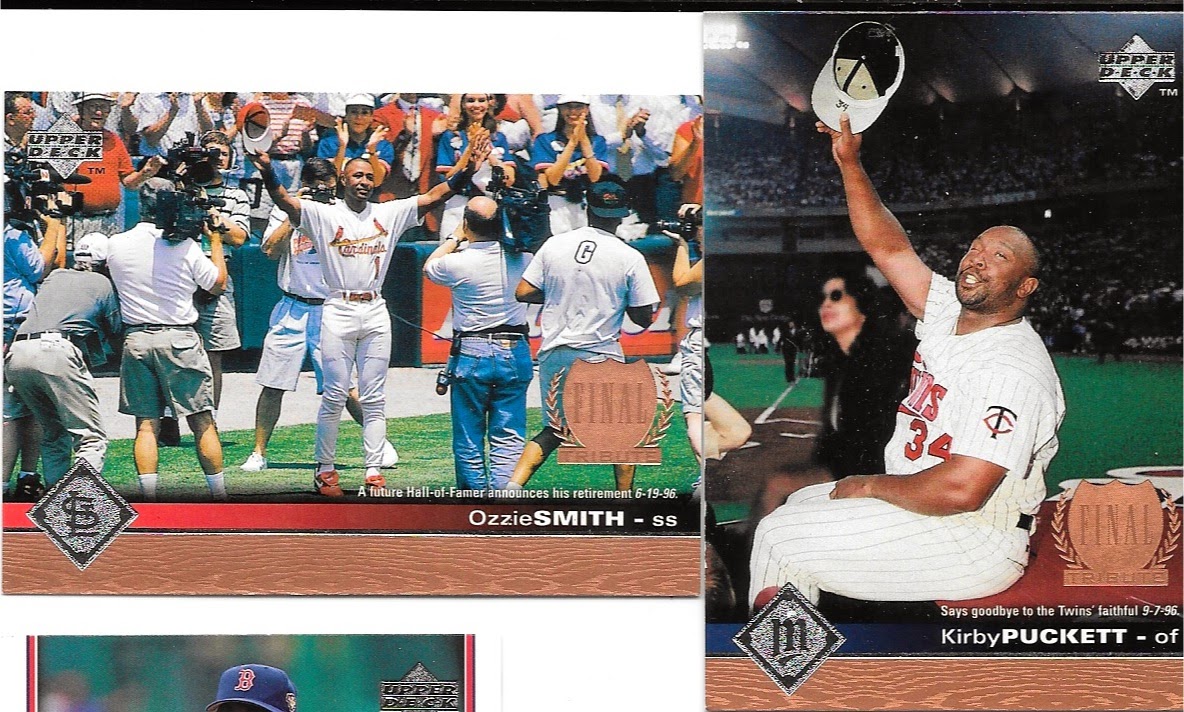 One thing I miss that Topps seems to actually be rectifying is the tribute card.  The retirements of The Wizard and Kirby Puckett were really the first time I can remember being aware of a major name player retiring.  It's nice to see that almost two decades later I found those memories immortalized on cardboard, with some great photos to boot.
Posted by Mark at 6:28 PM 1 comment:

I finally got the urge to watch the NL Wild Card game yesterday.  The Pirates post-season run, though disappointing, was by far the most magical point of my baseball watching life.  And nothing could top the excitement of the Wild Card game.

It's been months since the game, and I finally decided it was time to watch the broadcast.  You see - I was at the game, sitting directly below the press box with a fantastic view of the field.  But ever since the game I've been waiting to watch the national tv broadcast - to see if the energy in the crowd and the thunderous Cueto chants were picked up by the tv cameras.

Unfortunately Pirate postseason memorabilia is fairly few and far between, unless you wanted to $20 tshirt with the post season logo or some not so catchy saying.

I was doing my semi-regular game used jersey search on ebay a few months ago.   There were a good number of 2014 gamers listed, but mostly for coaches or players who were called up for a brief period.  In short - jerseys that probably had little to no actual game use.  But one jersey caught my eye.  Jeff Karstens didn't pitch all season in 2013, though he did spend a lot of time looking goofy in the dugout.

But it wasn't the name on the back that caught my eye.  It was what was on the side of the sleeve. 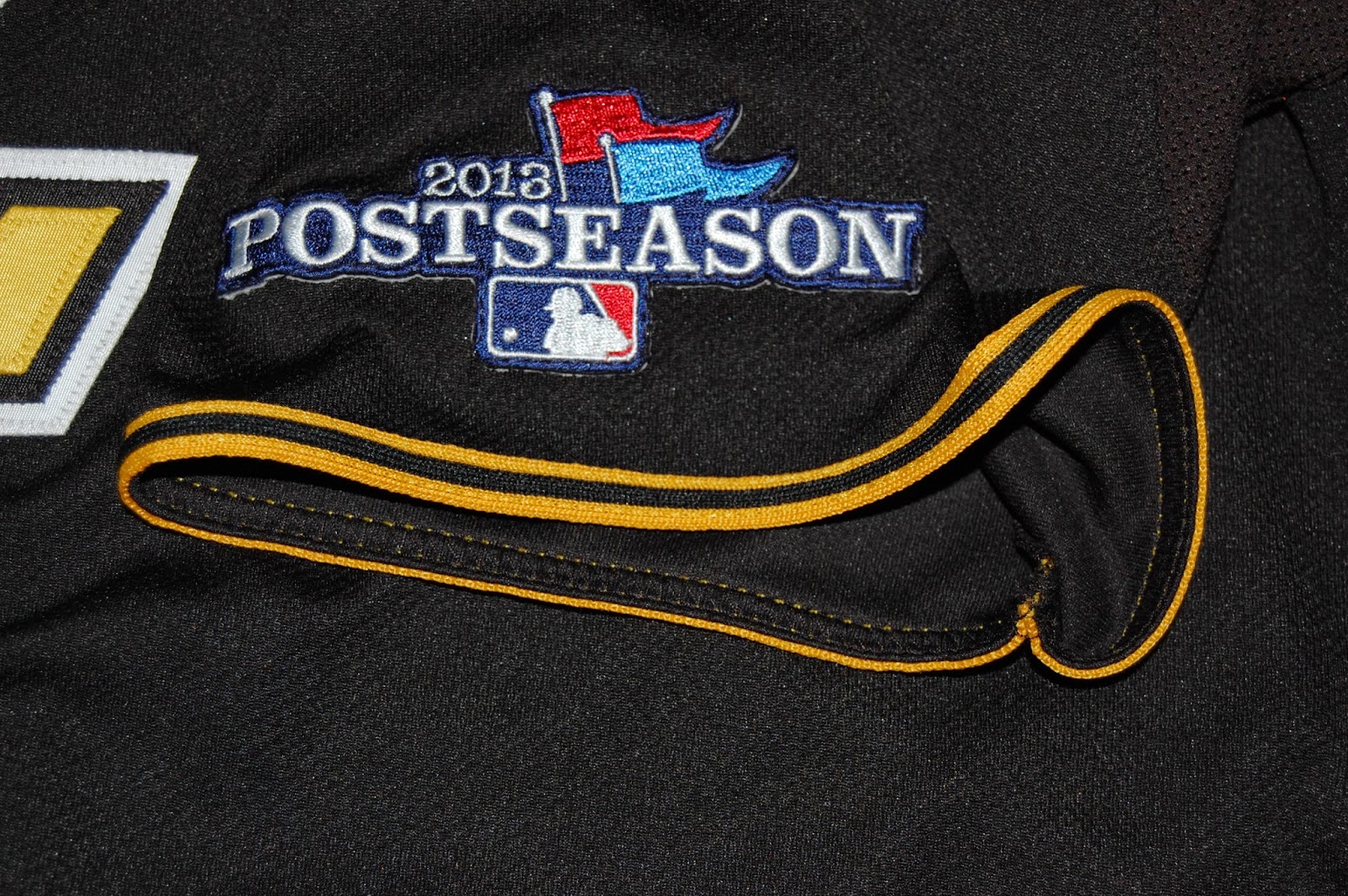 I couldn't get to that BIN fast enough.  Even if it was only game-issued, the number of playoff jerseys out there is incredibly limited.  And of those, most were auctioned off at prices that I would frankly never pay. 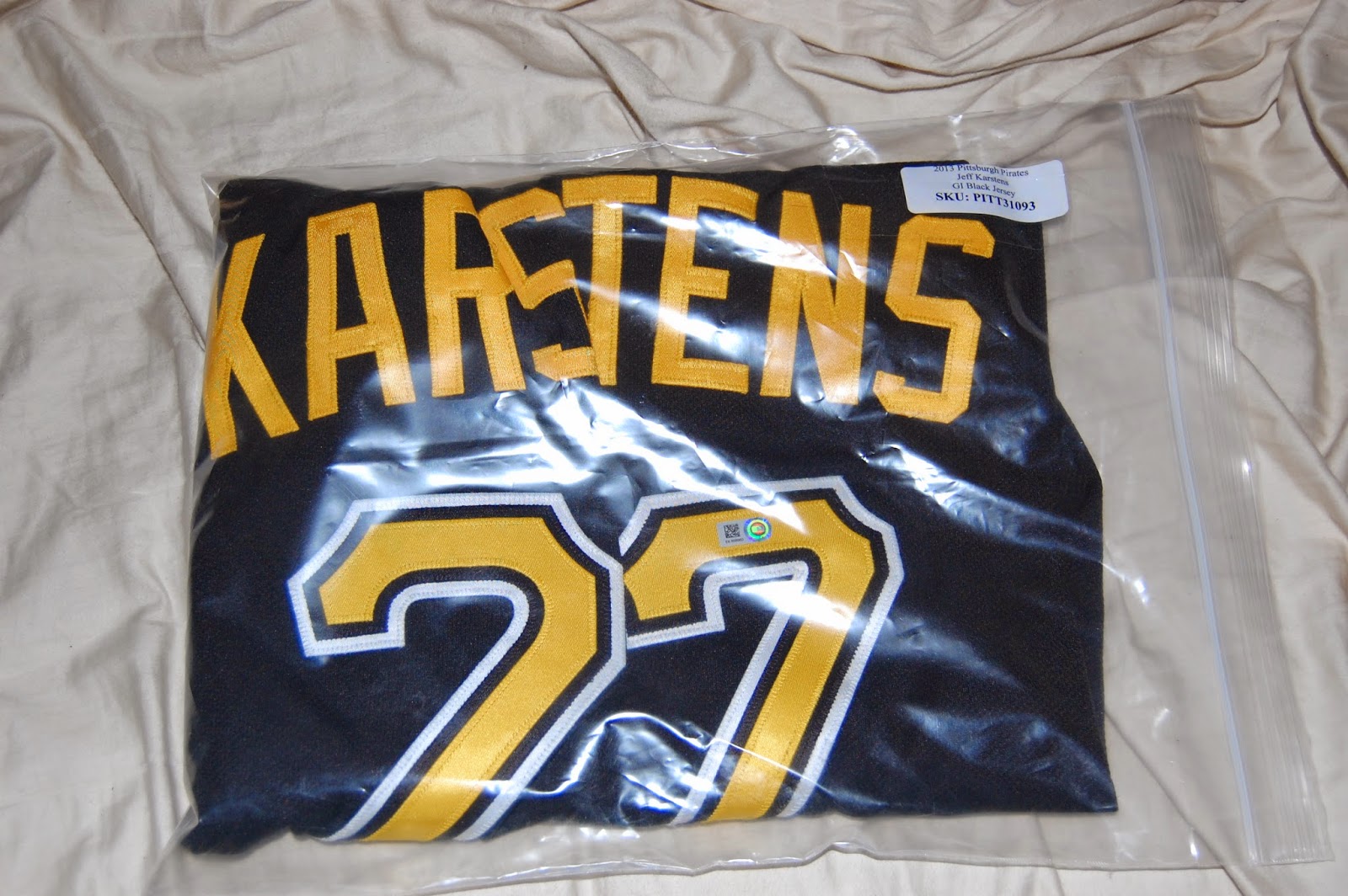 I can't recall if Karstens was in the dugout during the playoffs, but if he was this was certainly the jersey he would have on if he was wearing one.  If not, the postseason patch still makes this an amazing piece of Pirates history. 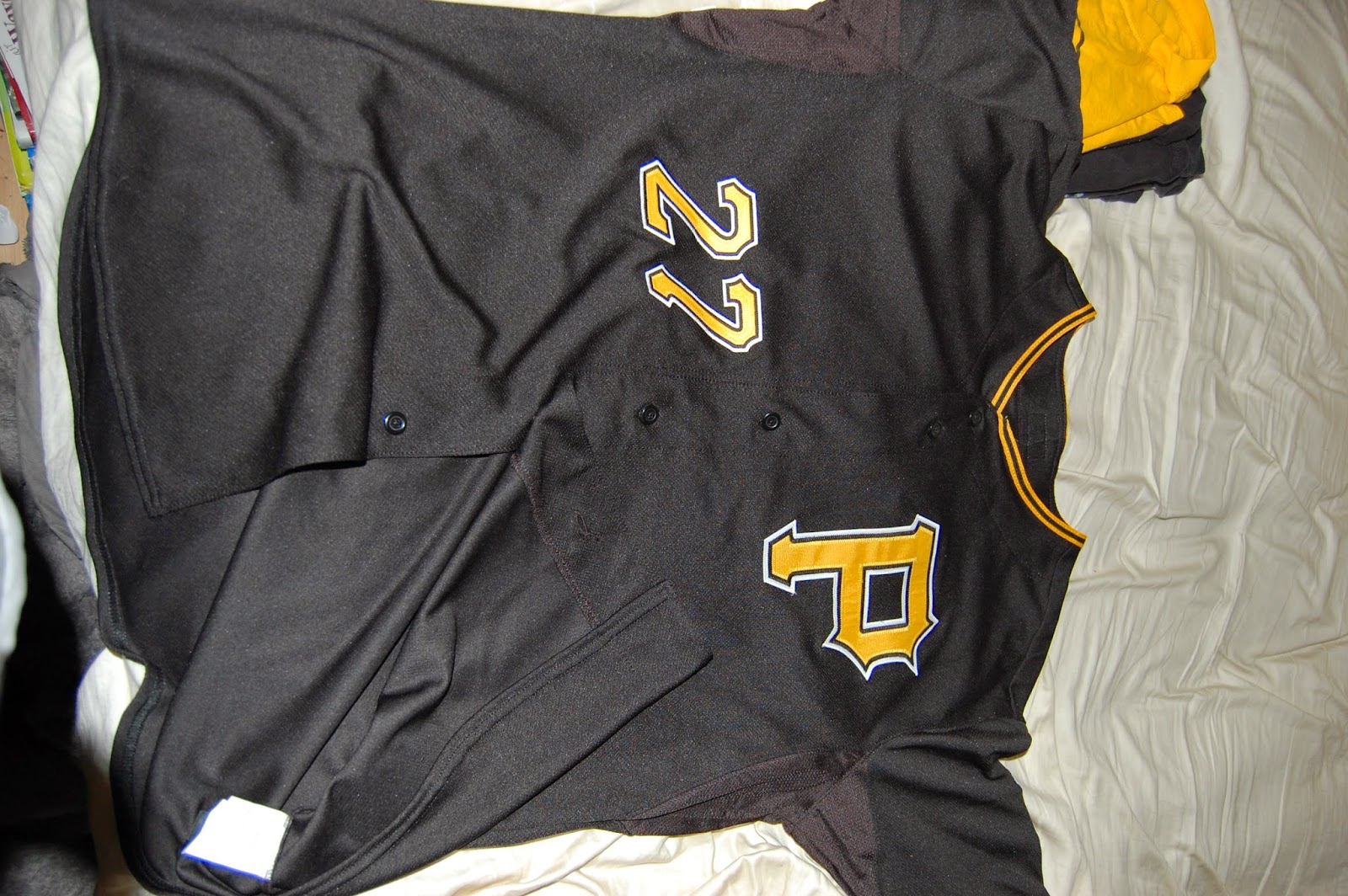 My game used collection has grown significantly over the last few years.  I always told myself that I would only buy jerseys that I knew were game worn - not just game issued.  But this was a rare case that seemed like it could be a once in a lifetime chance.  Of the other playoff jerseys, only the Pedro Alvarez and Jason Grilli have surfaced online, and both are listed at insane prices. 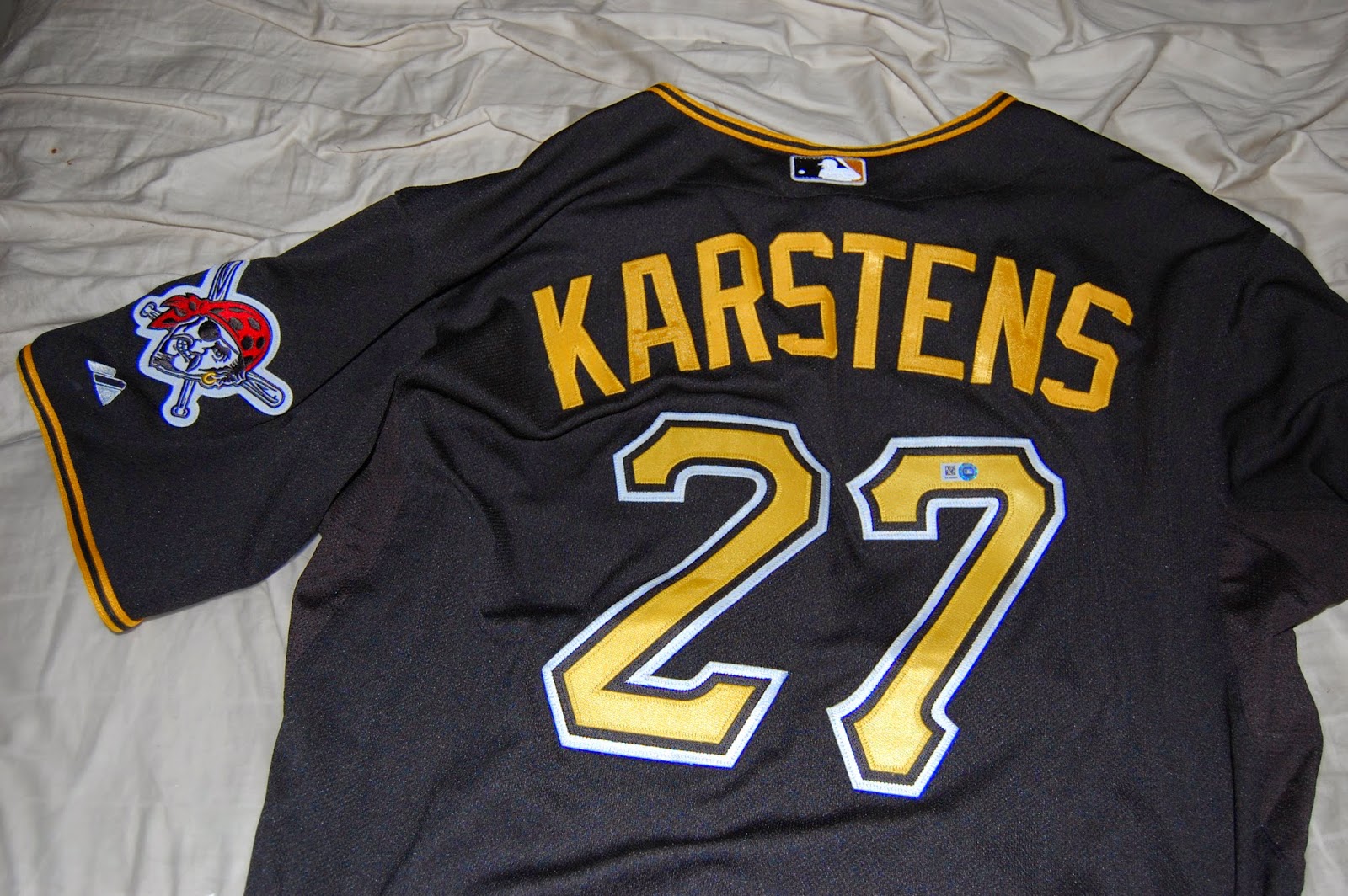 For now, this guy is going to stay bagged away.  But I can guarantee this will be one of the first pieces to be put out when the day finally comes when I have a house and mancave of my own.  Besides, what color looks better than black in Buctober?

One of the more irritating common needs from my Jack Wilson collection is the array of Topps Team Set singles from various years.  I've snagged a few here and there, including a Mariners team set that she surprised me with during her time living in Seattle.

But in general, I find it tough to justify paying a few bucks for what amounts to an over-glorified base card, particularly when the team set card contains the same photo as the Flagship card.  But I'm a little more willing to make an exception if the photo is unique.  It's almost like a different card entirely, rather than just the same ole same ole with a different number on the back.

I was doing some late night ebay browsing the other night and doing my regular Jack Wilson search.  Right at the top of the newly listed auctions was this guy, at a very cheap BIN price. 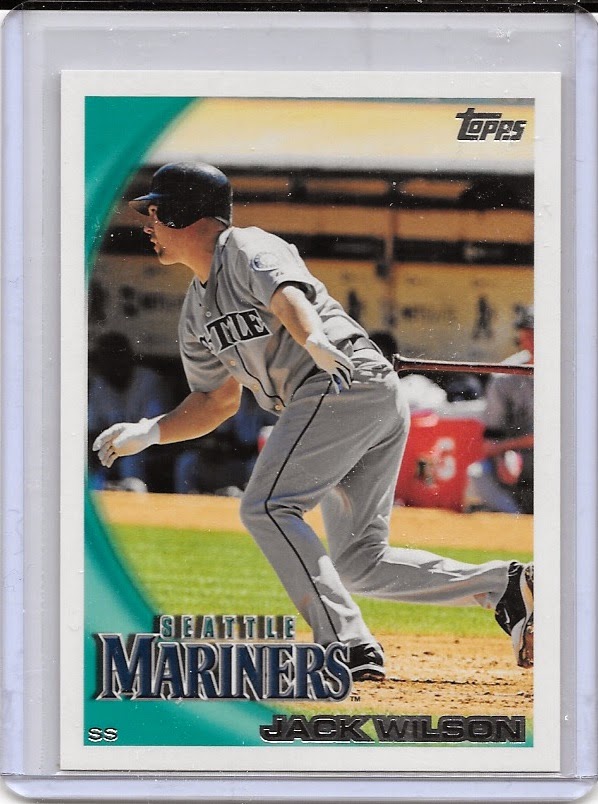 The card is from the 2010 Mariners team set, and is a card that I can't remember seeing before, even at an insanely high BIN price.  For a little over $1 delivered, I couldn't hit the BIN fast enough.

While it isn't the greatest photo, and actually pales to the photo on the Flagship card from that year, it's one of only a few M's cards that featured Jack.
The real crazy thing?  I'm more excited about this new pickup than any auto or insert I've added to my collection in recent months.  The team collector in me may never be satisfied, but the 13 year old player collector in me couldn't be happier.
Posted by Mark at 8:22 PM 2 comments: