Any team or player collector can undoubtedly tell you a story of a card that just seems to have disappeared from the collecting universe.  That rare card - not due to its low serial number or high desirability - that just...doesn't seem to exist on the vast reaches of the internet.  Some have a very good explanation - tons of unopened 2006 UD Special F/X.  Sealed factory sets and set builders putting together those obnoxious Topps Factory Set orange and red parallel sets from the past few years.  Or retail only products like 2007 Fleer Gold Mini's that just never make it into hobby circulation.

But you have your shot at a card, and fail to take it.  And sometimes...most of the time...you don't get another.

And that is our story today, folks.  The shot not taken.

I've written about how much I love Pirate gold refractors.  But the one most desired had eluded me for quite some time.  2002 Bowman Chrome Gold Refractor #61.  Jack Wilson.

It was the first year the golds were numbered to 50, Jack Wilson's sophomore year, and predated my first ebay purchase by a solid 3 years.

Out of the 50 copies, I'm sure many traded hands as the product went live.  But my limited avenues of circulation - the local card shop, some small shows in the area - never yielded any gold.

As my funds and card-finding resources expanded my Jack Wilson collection grew into a super collection.  And most of the needs from that 2002 year were filled through shows, trades, or ebay.

But that 02 Gold Ref?  Never was it seen or heard from.

And then one popped up on ebay a few weeks before I finished grad school.  I wanted the card.  I needed the card.  But I was watching money, awaiting the inevitable "what do I do with a Master's degree" lull.  I bid, but not high enough.  The card went for $5 or $6.  Not much, but the principled idiot in me wouldn't go over my "internal value" for the card.

Hell, there are 50 copies.  Another one has to show up someday.  Right? 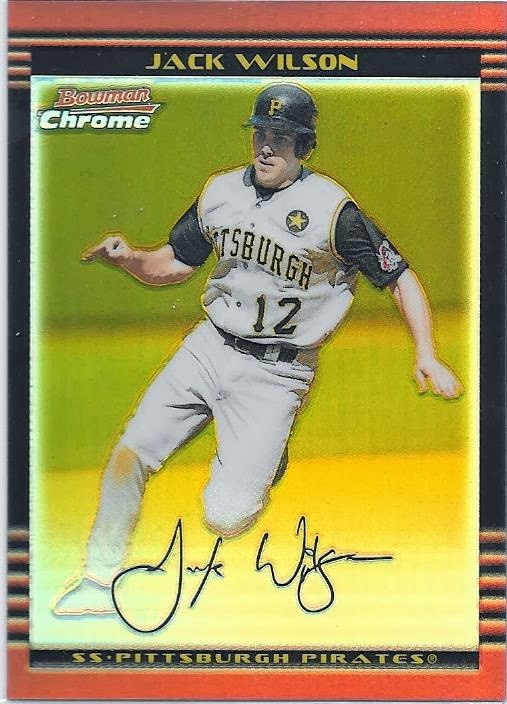 After years of waiting, another copy popped up on ebay last week.  This time there was no max bid.  No spending cap.  That card was going to be mine, no matter the price.  And home it came for under $5.

The Gold puts me at 80% completion for Jack's 2002 cards, and 72% for the entire Wilson collection.  But I guess that's the easy one, right?  Everybody knows you can sell a gold refractor.  It might be another 10 years before I see a 2002 Victory Gold listed.  I assume every single copy of that card ended up in the shoebox of some kid who stopped collecting in 2004.