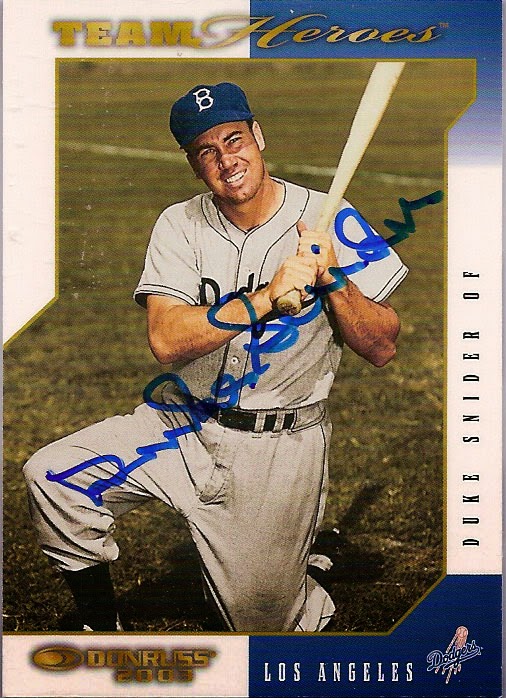 We all have special moments in our hobby lives that are unforgettable.  The year of your first pack.  Or first big pull.  Or first time you could afford a whole box of cards.

In the spring of 2004, I started actively visiting the Beckett Message Boards.  I had an account on the site for a couple years, but as my collecting interest started expanding and my all-consuming quest for Jack Wilson cards intensifying, it was time to venture into the wild world of the internet in search of new cards and the chance to share my passion with other collectors.

I can honestly say I have never seen a more knowledgeable group of collectors on an internet message board, and the group atmosphere was great.  It's a shame that Beckett has managed to repeatedly rebrand itself into irrelevance and chase off the most intelligent and well-versed collectors years ago to a hollow shell surviving on grading fees and brand recognition alone.

But during that spring, one magical thing happened.  I clicked on a thread about getting cards autographs through the mail.  Inside the thread were a list of spring training addresses for each club, and posters reporting about the players that had signed for them as ST started up.

This was heaven.  Instead of spending $50 to open a box and hope to pull some no name autograph...I could just mail a card to a player, and for the cost of two stamps have my very own autograph?

I spent a few days reading through that thread and all the previous ones on the site about TTM autographs, intent on knowing all the basics before I tried my hand.

And then to work I went.  Crafting what my 16 year old self thought were beautiful letter, addressing envelopes, properly applying baby powder to glossy cards.  And into the mail that first batch went.

Suddenly getting the mail after school each day became an exercise in wonder and excitement, rather than a tedious chore.  It was like opening a pack of cards, but with each return (hopefully) containing a "hit."

And I checked and checked.  Waiting each day impatiently for that first return.   And then it arrived.

I carefully tore into the envelope, anxious to see what signed goodness awaited me.  And there it was - a signed 2003 Donruss Team Heroes card of Duke Snider.  Yep, my first return was a Hall of Famer.  Not a bad start, eh?

It's been nearly a decade since I sent out my first TTM requests.  They aren't something I blog about very often.  Part of that is because the requests go out far less frequently than they used to.  Part of that is because I still address every single envelope to my parents' house, just like when I was 16.  After all, you never know when it might be years before a card is signed and returned - and with the frequency I've been bouncing between states over the last few years I would have for any autographs to get lost in the shuffle.

The daily excitement of checking the mailbox after getting off the school bus is gone.  Over the last decade I have sent out thousands of requests, and had thousands of cards come back signed.  And as I've already written this week about that nostalgic feeling.  But...here it is again.

A decade ago my life was very simple and very different.  Girls and cards (and never the two shall meet).  The extent of my stress was a chemistry test, or math homework.  There's a little more on my plate these days.  And a little less time to write letters to baseball players.  And instead of writing to my heroes, I'm sometimes writing to players the same age or younger than me.  That's a bit strange still.

But it's hard to believe I've been writing letters asking for autographs for a decade.  That thrill of opening the mailbox, waiting for a small white envelope in my admittedly terrible handwriting to be sitting on top of the stack of bills and junk mail is just as fresh now as it was when I received my first return.
Posted by Mark at 8:04 PM