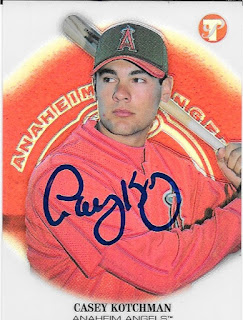 Baseball can be a strange, strange game.  Take a look back at top prospect lists from the past decade and you'll see the top of the lists littered with names that make you say, "Who?"  And even for the guys that make it, or at least seem to, success can be fleeting.
In the mid 2000's, I bought in to prospect hype.  Not to any significant degree, but I picked up a few cards here and there of guys who I thought were sure fire locks for big league success.  Casey Kotchman was one of those guys who I thought would be a blast to watch for the next two decades or so.  He had a great approach at the plate, hit the ball well, and was a pretty strong defender.  He was the type of well-rounded player I love watching.  And when he put up close to a .300 average with good power by age 24?  Seemed like a guy who was headed towards good things. 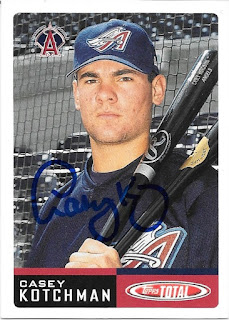 ...and then by 30 he was out of baseball.  Like I said, crazy game.  Even when his star was on the rise, Kotchman was a great TTM signer.  And those habits have continued since leaving the game. 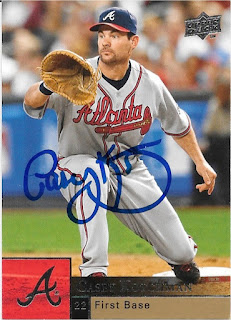 I always like getting cards from different teams signed, particularly for guys who have traveled around a bit.  But the real star is the signed Pristine Refractor at the top.  It was one of those prospecting buys, and I still remember shelling out $1 for it at a mall show around 2005 or 2006.  It's been sitting in a box, toploadered and waiting for superstardom ever since. 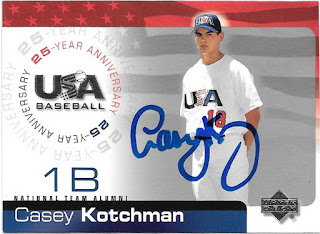 Looks like the time for that came and went.  So I'm glad the card got a second life through the mail.  Even better, the blue signature looks awesome on the card.
Posted by Mark at 1:35 PM

Email ThisBlogThis!Share to TwitterShare to FacebookShare to Pinterest
Labels: TTM