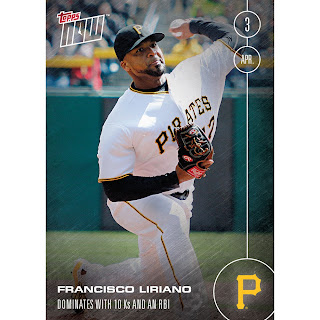 This hobby is a funny thing.  Sometimes it feels like it's standing still, resting on the laurels of ideas that came about ten, twenty, sixty years earlier.  Other times, it speeds by so fast you think somebody hit the fast forward button.

I had been slowly dropping out of blogging when ToppsNOW first started up, but was still actively collecting.  If you'll remember, then-Pirate Francisco Liriano was the first card in the "set."  There wasn't much time to think over whether I cared for the cards or not - I had a couple hours to order or not order the first Pirate card.  Ultimately I decided to pass.  The idea of instantly capturing the biggest moments in the game seemed great.  The price didn't.

I don't regret the decision.  It's a cool novelty, but not worth the price to me.  A similar price can nab me most autographs of Pirate HoF'ers Ralph Kiner or Bill Mazeroski.  I could add some low numbered parallels.  Heck, most 1/1 press plates sell for less these days.  And with many print runs higher than a Topps Gold, I think we'll see a lot of these Topps Now cards popping up in dollar bins at shows in 3-5 years.

But maybe the biggest driving force is the fact that I have all the tools to make those Topps Now cards myself right within an arm's length.  Literally.  I've been making custom cards for years, and have gotten pretty comfortable.  I have a printer, and have a printing process that produces a card that's actually a thicker stock than the flimsy Topps cards (though I do skip card backs - just personal preference).  Why shell out $10 to Topps when I can make something more memorable and special to me right at home?

When Topps announced their Living Set money grab concept, some conversations started up in the collecting communities I'm in.  In my Team Collector group, we discussed the idea of making our own Living Set.  And on Twitter (@battlinbucs) the a few different collectors and bloggers who make customs started kicking around the idea of doing a Topps NOW style set for our teams.

The conversation kicked in a few different directions - a highlights set, a 40-man type set with highlights, using the Rookies app, printed versus digital cards, and if it was possible to have a common design shared across teams. 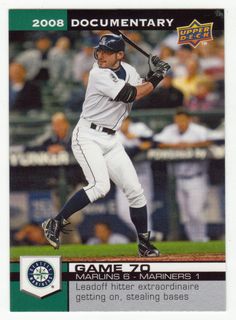 Ultimately the conversation sort of petered out.  And apparently everyone went back to their corner of the internet and went to work.

Over the next few days the conversation picked up again.  It turned out that a number of collectors, including myself, had run with the idea.  But we all went in completely different directions.  Be sure to check out Summer of '74 and Matt's (@mjpmke) late 70's inspired set.  Meanwhile Nick (njwv.wordpress.com/@vossbrink ) went for a '93 Upper Deck design.

This is what I came up with.  I'm very excited to show off my 2018 DocumentaryNOW cards, based off of the 1960 World Series Highlights subset in '61 Topps. 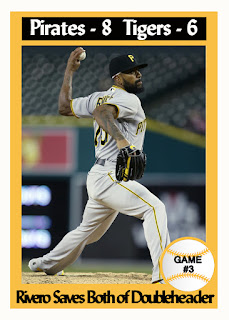 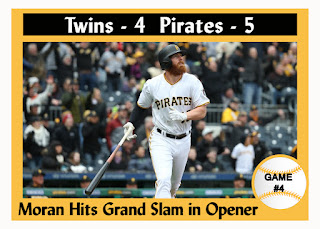 It made sense to me.  First, the '60 World Series is such an iconic moment for Pirates fans, and the highlights cards are some of my favorite from that era.  Second, I don't print card backs on my customs.  So I was looking for a design that would feature the critical info I wanted - game, score, and memorable moment - without being too busy.

I found it really cool that each of us picked three very different designs (or in my case, a modified design) from completely different eras of collecting.  Hopefully a couple other custom card makers get on board - it would be a lot of fun to see as many teams as possible represented this season.

I loved the 2008 Documentary set, and initially was trying to build a design that played off that set.  Documentary was the most excited I've been about a card set in ages.  I loved the idea of commemorating each game of a season.

But UD's effort fell well short.  They recycled the same 8 or 10 players and six players through every card in the set.  And the "highlight" sounded a lot more like a random piece of info picked from a box score.  When you have thousands of cards to design, it's not a shocker.  But I wanted to capture everything I hoped Documentary would be in a set - photos from each unique game and flavor text that included something memorable. 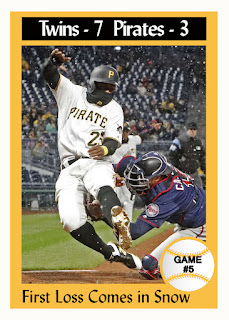 I'm cautiously optimistic that I'll be able to keep this up for a full season.  I'll be posting the set daily (or close to it) on Twitter with the hashtag #DocumentaryNOW and hopefully some occasional updates on the blog.  I hope you'll check out the awesome work myself and other collectors are putting together throughout the season.

Oh, and remember how I said the idea of doing a 40-man style set was kicked around as well?  Check back in the next few days.  I may be working on something on that front as well that's a little less retro-inspired.