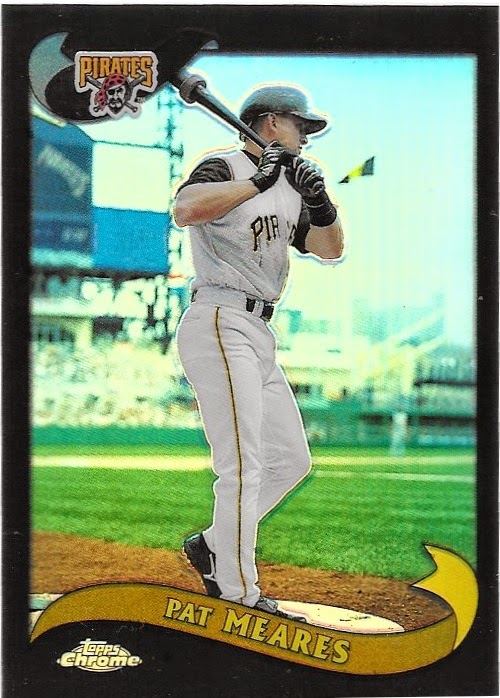 Round one of my COMC packages came in yesterday, with part two still not shipped.  I ended up with 201 new cards headed my way.  About half of those were purchased between Thanksgiving and the last free shipping special sometime last Spring.

And there was certainly no shortage of shiny cards in this order.  I was finally able to snag a few cards I have been after for quite some time.  In 2002, Topps colored refractors to Chrome.  The base refractors were gold bordered, to match the Flagship set that year.  The set also had a black refractor parallel, which I had absolutely no idea existed until years later.  In 2002 Topps Traded, the Black refractors were /100, and I actually pulled a couple from the boxes I opened back in the day.  But I had no idea the main Chrome set also included the black parallels, limited to 50 copies.

The Black Refractors look great for the Pirates cards, but seemed insanely tough to come across.  But after years of chasing even a single copy, I was able to snag two of the black ref's /50 off of COMC in recent months, both for around $3 each.  While Pat Meares doesn't exactly evoke warm and fuzzies among Pirate fans, I love the dugout shot that shows PNC park in the background. 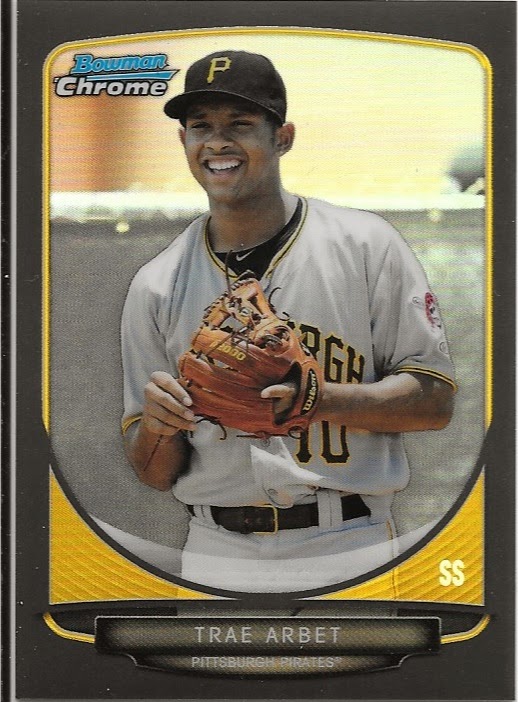 I keep telling myself I'm going to stop buying Bowman prospect cards unless the player actually reaches the majors.  And then I see a card on the cheap, and the cycle begins anew.  Trae Arbet is just one of many shortstop prospects that will probably never hit enough to reach the majors.  But I paid $1.35 for a card numbered /35.  And it's shiny.  And I'm a weak willed collector. 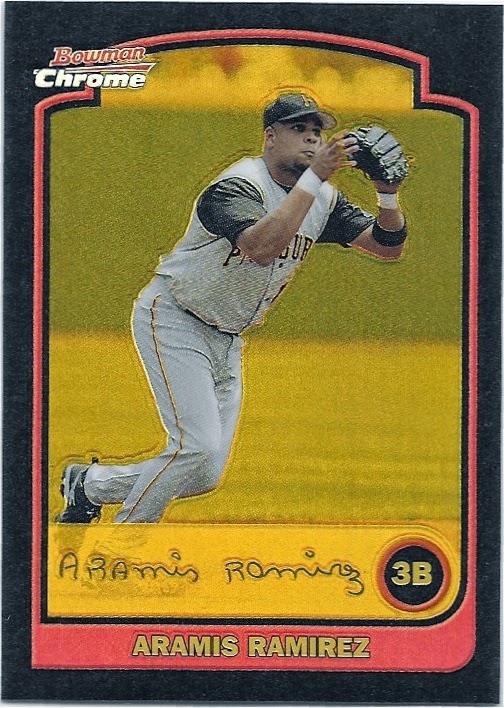 Remember how for a few years Topps insisted on inserting boxtoppers with those obnoxious Uncirculated cases?  Topps was pretty indecisive with the numbering of the gold refractors in the early 00's.  There were 99 copies in 2001, 50 in 2002, and 330 in 2003.  For whatever reason, 2003 has been the hardest to track down.  I blame the damn uncirculated cases. 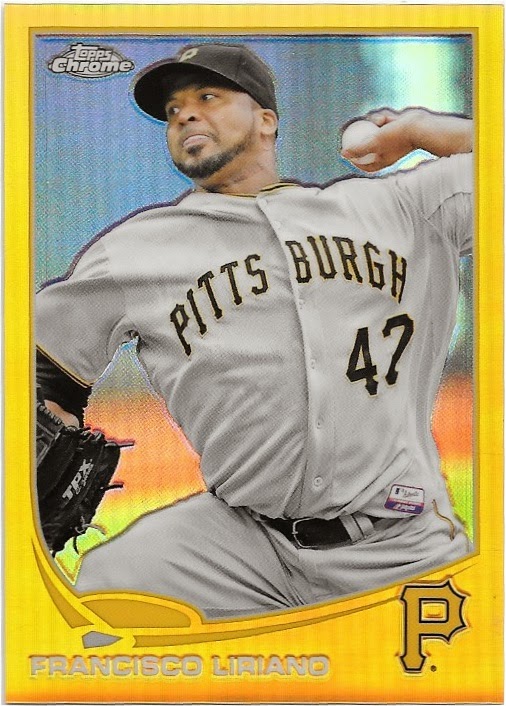 Remember how big of a deal people were making about the Holiday Mega Boxes with exclusive Update Chrome cards last year?  What you probably don't remember is how quick prices fell off a cliff.  The first copies on ebay for this Liriano were going for $10-15.  I think I paid $2-something for mine.  Jeff over at 2X3 Heroes was gracious enough to trade me the Black Refractor, so this makes for one shiny mini rainbow. 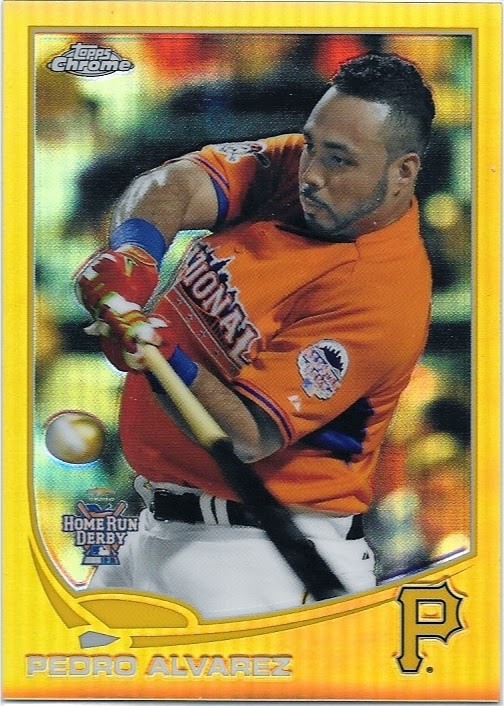 And in case you needed a reminder of how fickle the baseball gods can be, HR Derby and home run crown one year, bench bat that can't throw the baseball to the nice man with a glove the next.  Hopefully Pedro can do more hitting and less throwing in 2015. 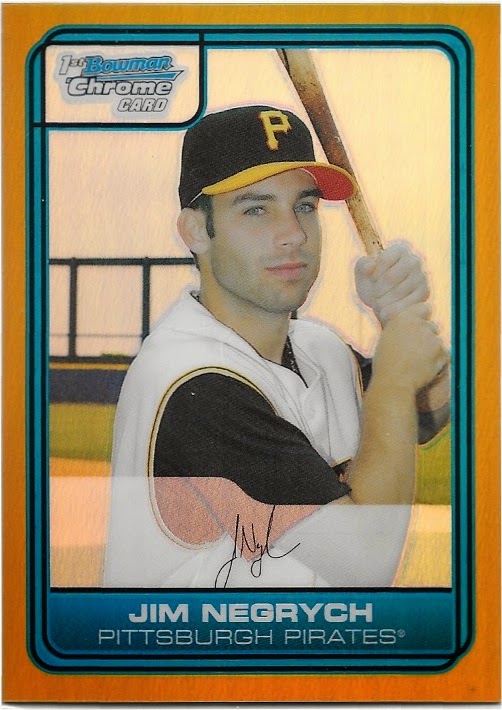 This scan came out looking orange, but I swear it's a gold.  Jim Negrych played at Pitt before being drafted by the Bucs.  He moved up the system pretty quickly as a high average/on base guy who didn't really have a true position.  I know I wasn't the only Pirate fan hoping he could end up a multi-position bench bat ala Rob Mackowiak and Josh Harrison.  But he ultimately topped out at AAA, and played independent ball last season. 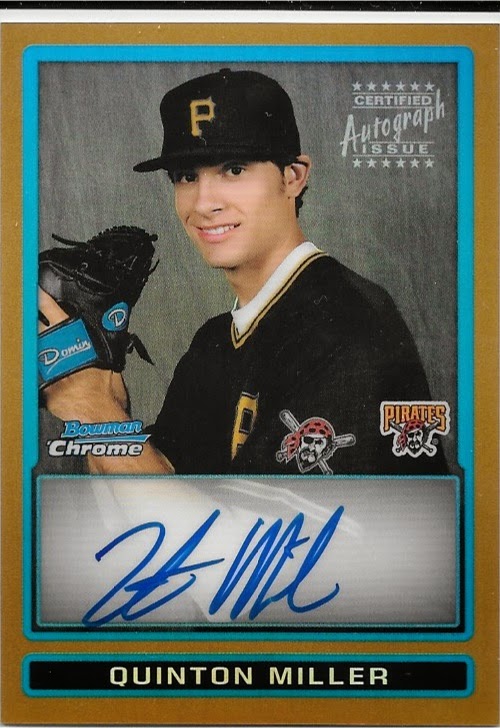 Quinton Miller was one of those projectable bonus babies that the Pirates loved.  He signed for somewhere around $1M as a 20th round pick.  He made it up to AA as a reliever last year, but he's nothing more than organizational fodder at this point.  But for a mere $4, I couldn't pass up the chance to add a gold refractor auto.  This makes me a prospector, right? 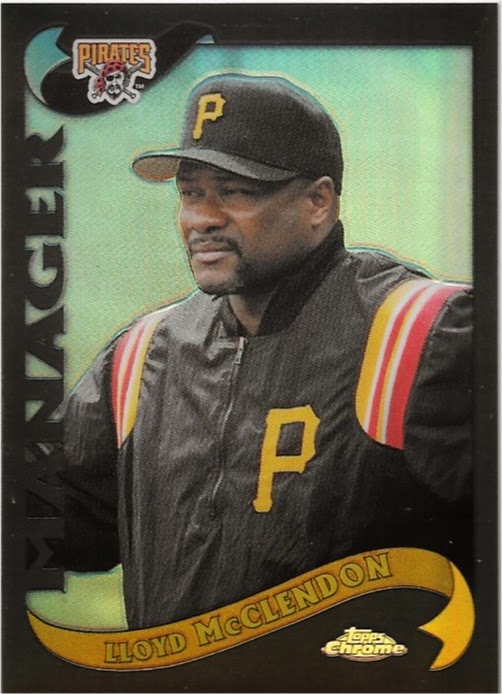