Flea Market Finds: Oops, I Did it Again Edition

This weekend got off to a pretty lame start.  Saturday morning, we headed up to the local flea market I've been raving about in recent weeks.  I had a card on hold from two weekends ago, and was looking forward to digging through a few more boxes.

I have no clue what was up, but more than half of the indoor vendors weren't there, including Ken, my card guy.  Just...tarps or fences over their stalls, and not a face in sight.  It was confusing since my last trip there was on a Saturday, and there was a pretty good crowd.  Kate and I walked around trying to find anything that caught our eye, but we both walked out empty handed.  I'm glad we drove a mile up the road.  Anything more, and I'd have been a little ticked off.

But I woke up this morning needing my fix.  I rolled over to Kate and asked if she wanted to drive to the flea market south of Pittsburgh.  It was a little bit of a risk - it's about an hour away, and being early in the season there wouldn't be as many vendors as peak season.  But off we went. 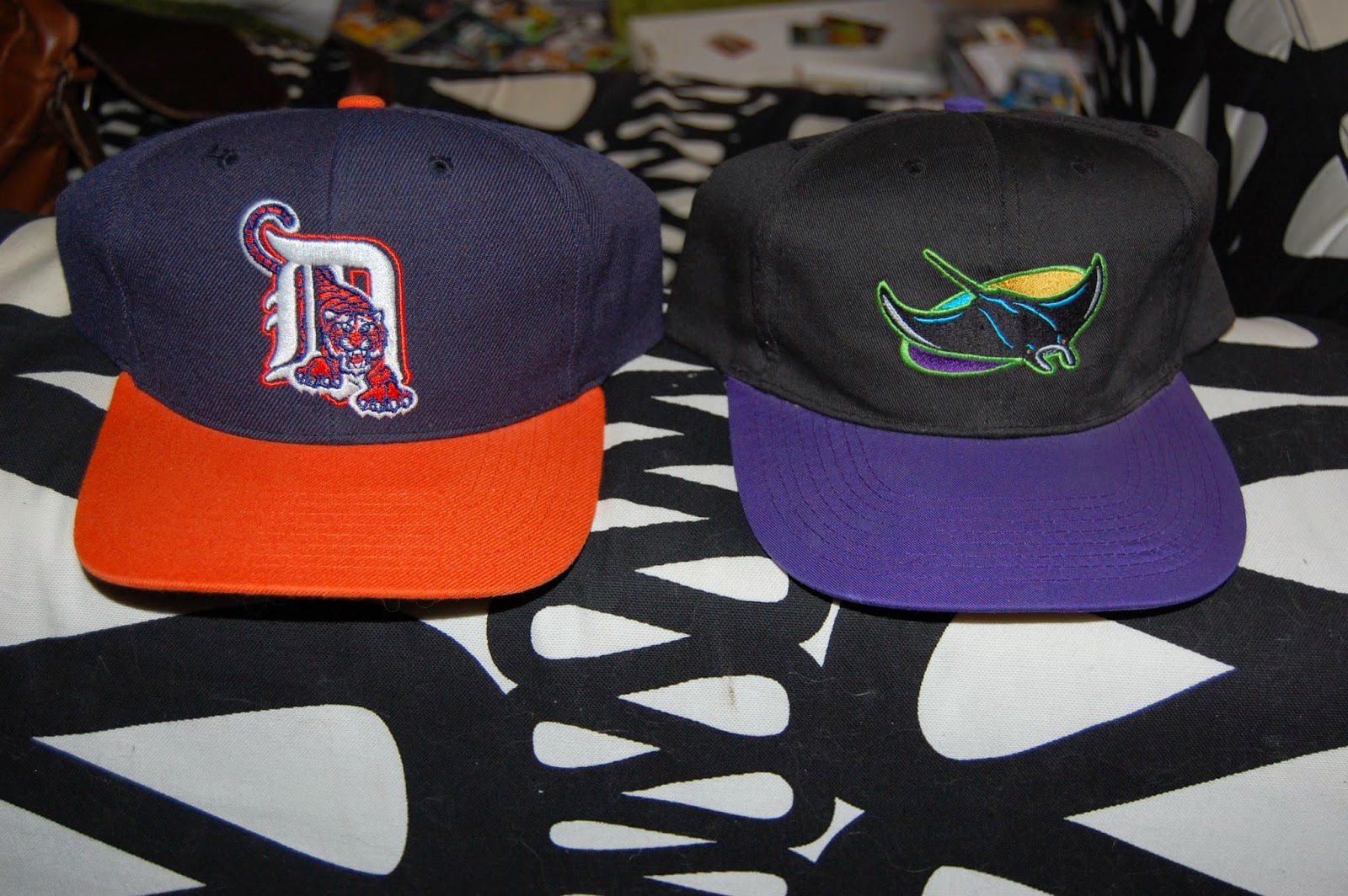 We had cash, but Kate suggested we stop and get a little more out.  I was planning on keeping my budget tight, but in these circumstances it never hurts to be safe in case you find a big score.

And...you know how this one goes.  Things started slow.  I walked through 5 of the 6 rows, and had come up with nothing more than these two awesome 90's snapbacks for $3 each.  The Devil Rays hat will be perfect with the D'Rays jersey I wore to the National last year.  And while I don't have any real affinity for the Tigers (or the fashion fad of "vintage" hats...I'm just a uniform nerd), this is by far the coolest cap the Tigers have worn. 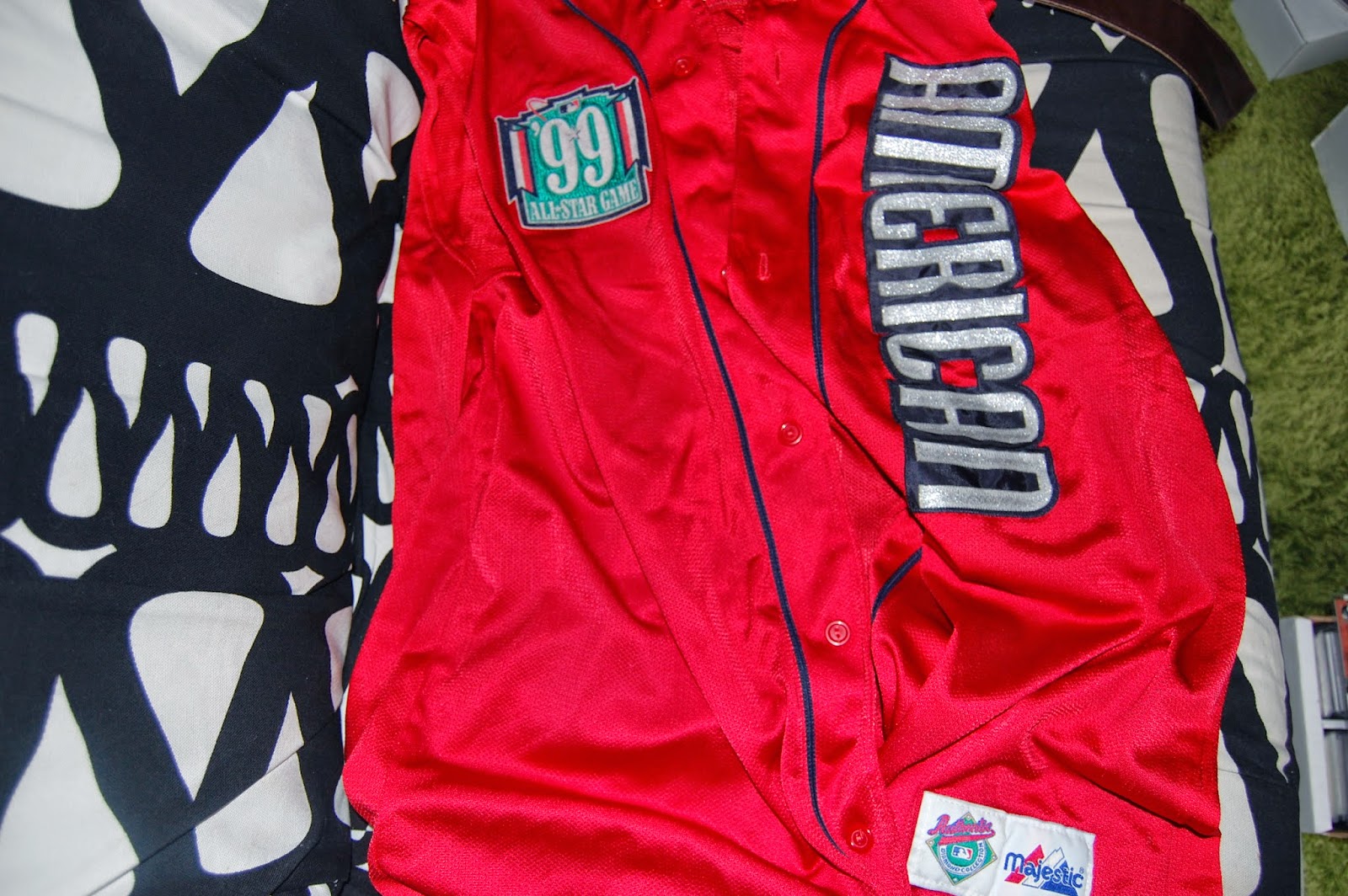 But the big score came in the final row.  There's a vendor at this flea market who always has large stacks of jerseys for sale.  He always has a wide selection of teams, and lots of unique jerseys.  As best as I can tell, they're all legit - no China knockoffs like many flea markets.  Just old jerseys and dealer samples.  I've looked countless times, but never saw anything that caught my eye enough to buy.

But that changed when I saw this 1999 American League All-Star game jersey right near the bottom of the pile.  At first, I couldn't believe it.  Regular blog readers know Dime Box Nick and I are trying to spread the gospel of Turn Ahead the Clock jerseys to the masses.  And while the TAHTC nights get most of the love, design elements from those jerseys crept into the All-Star jersey in 1999, including rotated league names on the front and the same treatment for player names on the back.

This jersey is blank backed, unfortunately.  But it's a thing of beauty from the late 90's - telling the future and the non-future.  The vest style of this jersey was pretty much absent from the game at the time - I think the Reds wore one at this time - but would become a short lived fad over the next few years.  The sideways team nameplates?  Not so much. 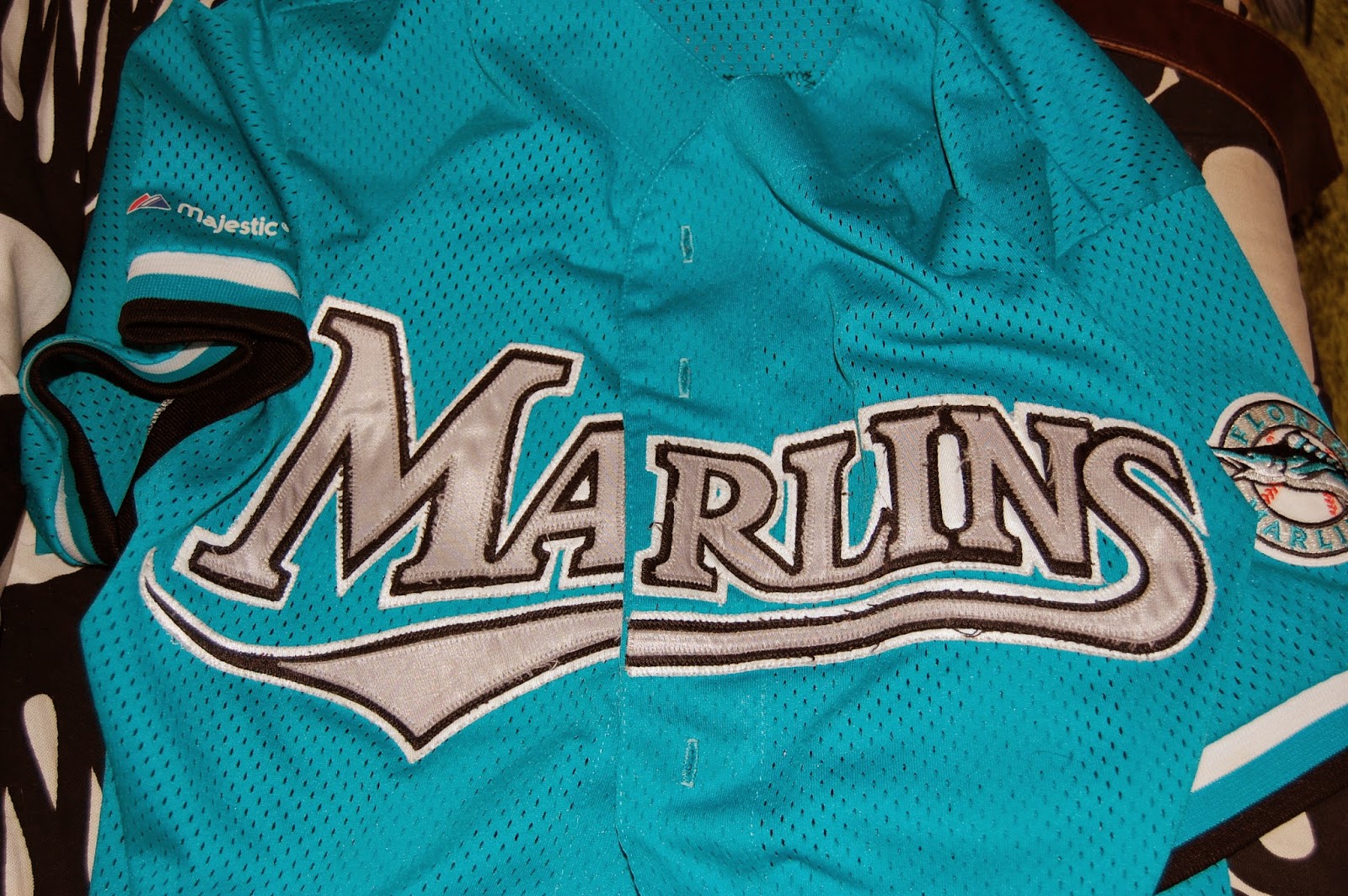 But I'm a bundler.  As much as I loved the ASG jersey, I wasn't ready to pay $30 outright for it.  And right at the top of my jersey want list for the longest time has been a teal Marlins jersey.  The Marlins were my second team from the day they started playing to the day they went all art deco and broke my heart.  So much so that I actually decided over Easter weekend to start a second (and far less intense) team collection of the Fish.

This jersey was the perfect size.  There are some loose threads on the nameplate, but I should be able to snip those.  I'm not sure if this style was ever officially worn - the Marlins wore a teal warmup jersey, but all the photos I've seen had a black team name - but I'm still very happy with the pickup.  And...bundling! 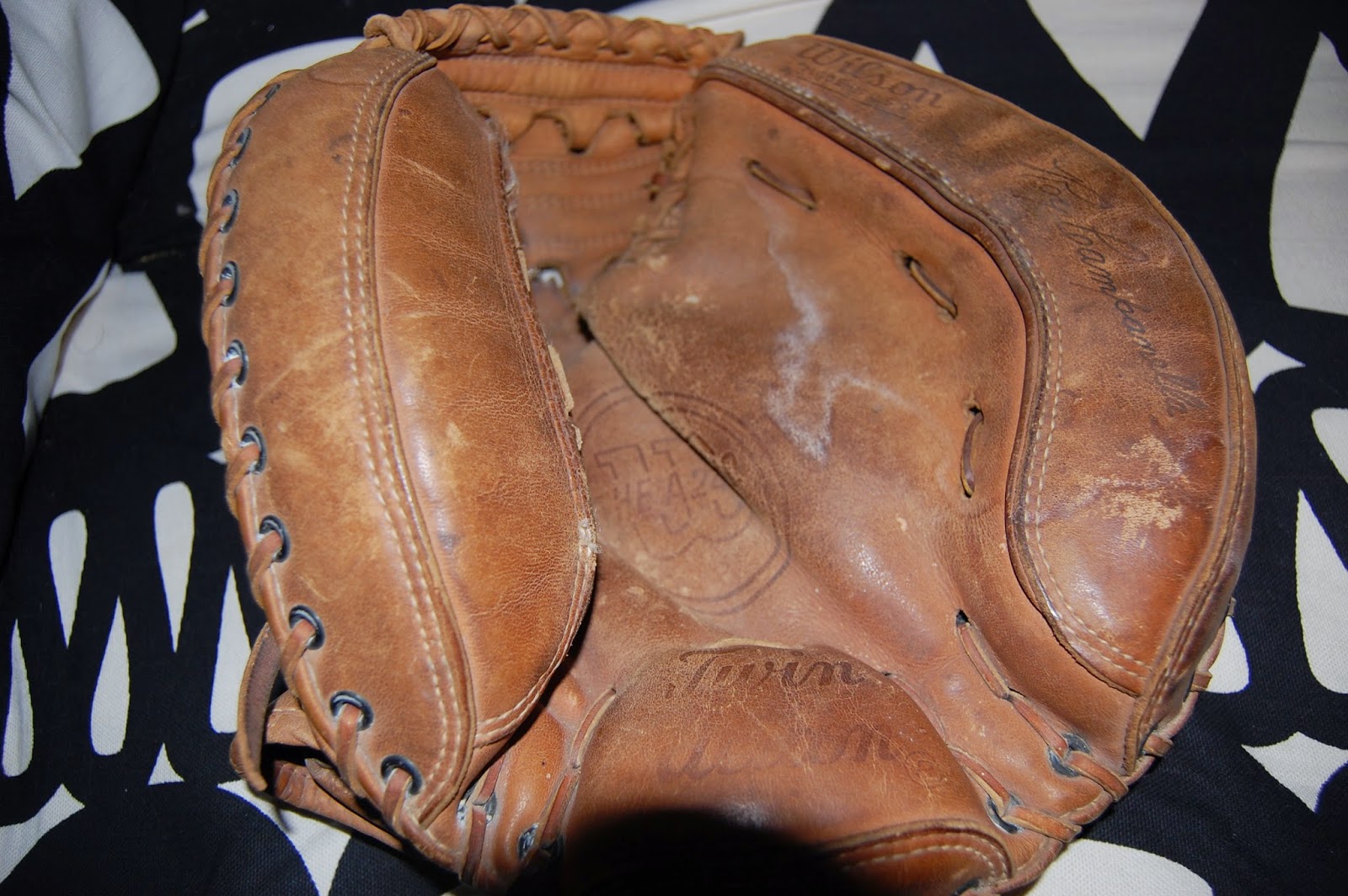 But I wasn't done yet!  The vendor - Bob - had a stack of old baseball gloves.  I just had to ask.  They were all store models, but had some nice wear.  Vintage gloves are the one area of baseball memorabilia that I know next to nothing about.  But I was feeling impulsive.

They had a great look, and I figured could make for a nice display piece with all my other game used items at some point.  There were some nice fielder gloves, but I've always had an appreciation for catcher hardware.  My dad was a catcher, and with his birthday coming up in June, this Roy Campanella model glove just screamed out to me.  His favorite player was Yogi Berra, and Campy may have been just a little before his time, but I hope he gets a kick out of it. 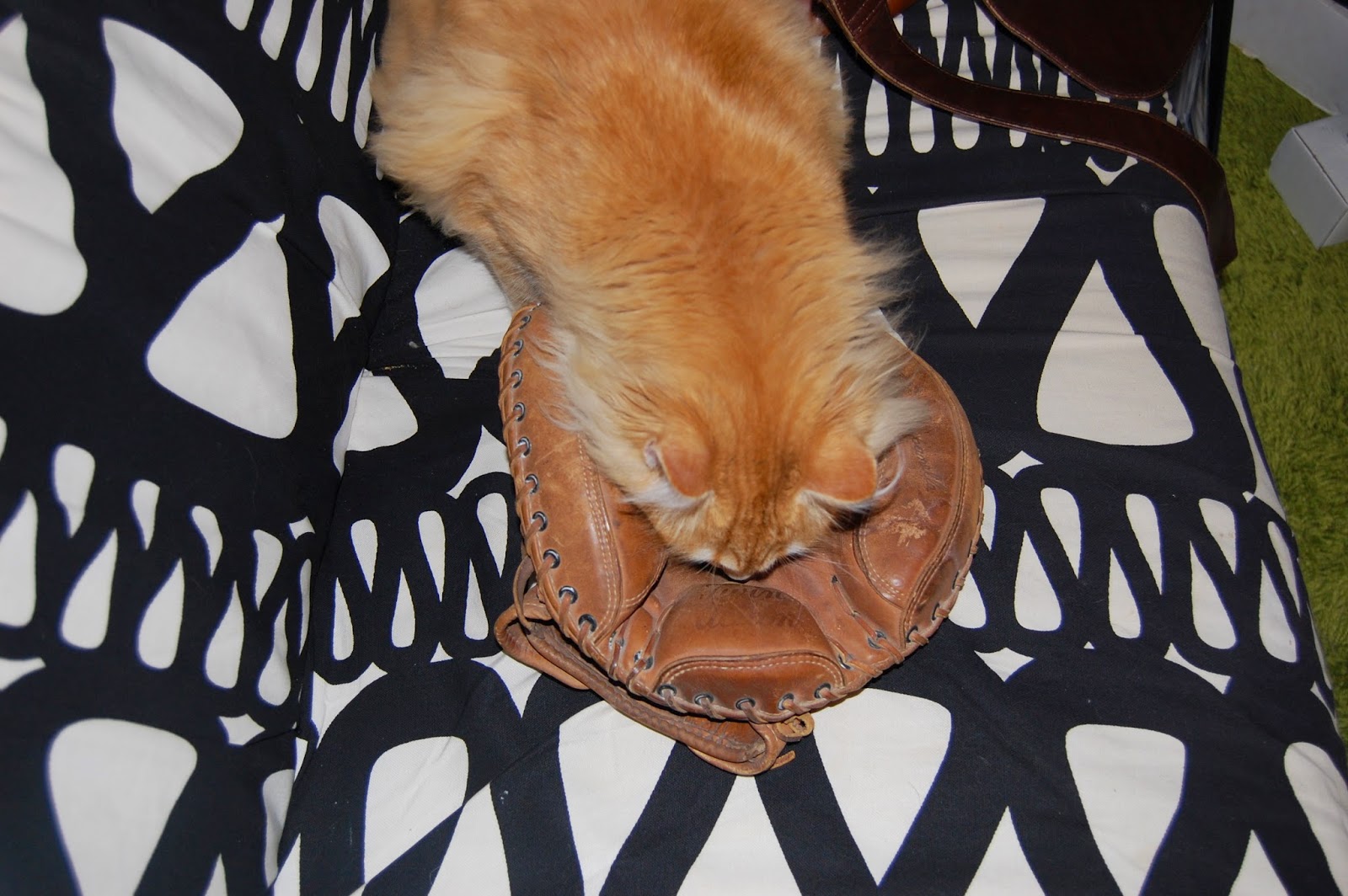 More importantly, quantity makes all the difference in bundling.  The original quoted price on the glove was $30.  But my bundling powers were in full force.  For those counting at home, individually, the three items were priced at $30 each for a grand total of $90. 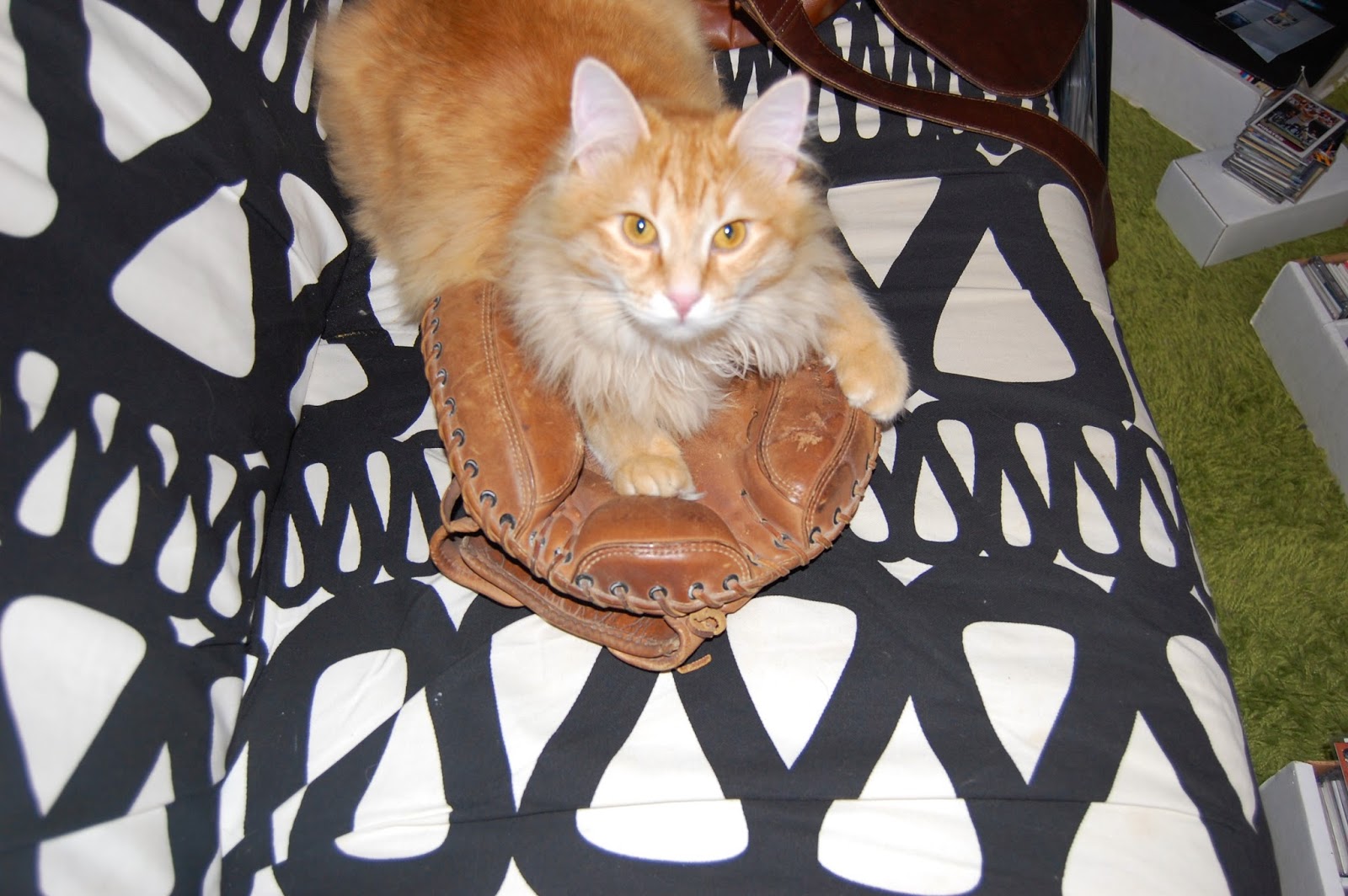 And just for the record, this is what I go through to share my pickups with you.  Waldo felt the need to walk over and lay down on each and every item I laid out to photograph.  It's a hard knock life. 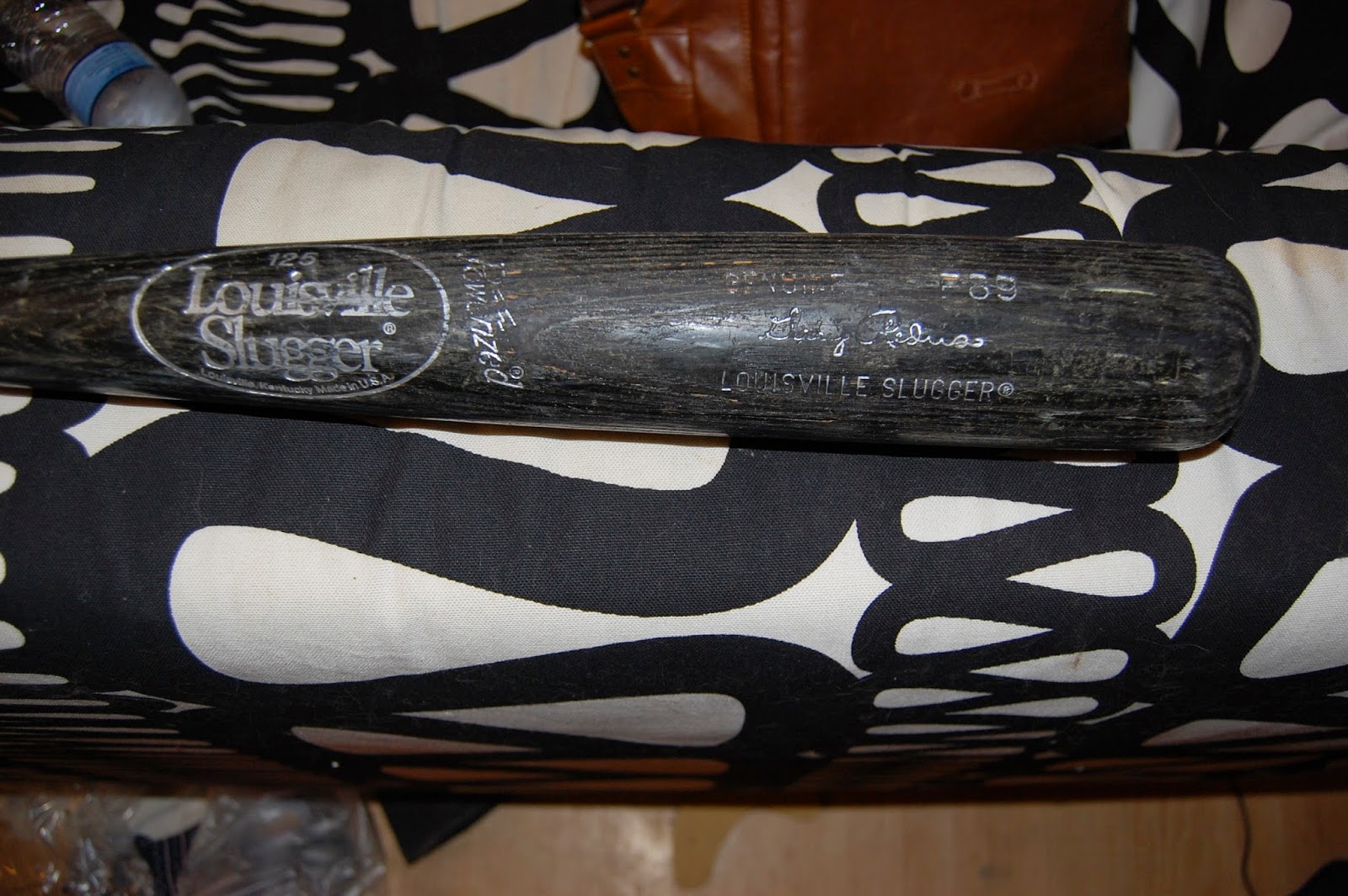 There were a stack of well worn bats, and I asked if any were game used.  I was pleasantly surprised to learn that two were - a Gary Redus and Ronny Paulino.  I usually stick to game worn jerseys, but bats always make for nice display pieces.  I had checked in on the bats when I first got to the table, and the price was $40 each.  But with my bundling Jedi powers in full force, I wasn't leaving without a bat.  I decided on the Redus - it showed better wear, and I just love the Louisville Sluggers with the stamped signature.  And I'd imagine bats from early 90's Pirates teams are in relatively shorter supply. 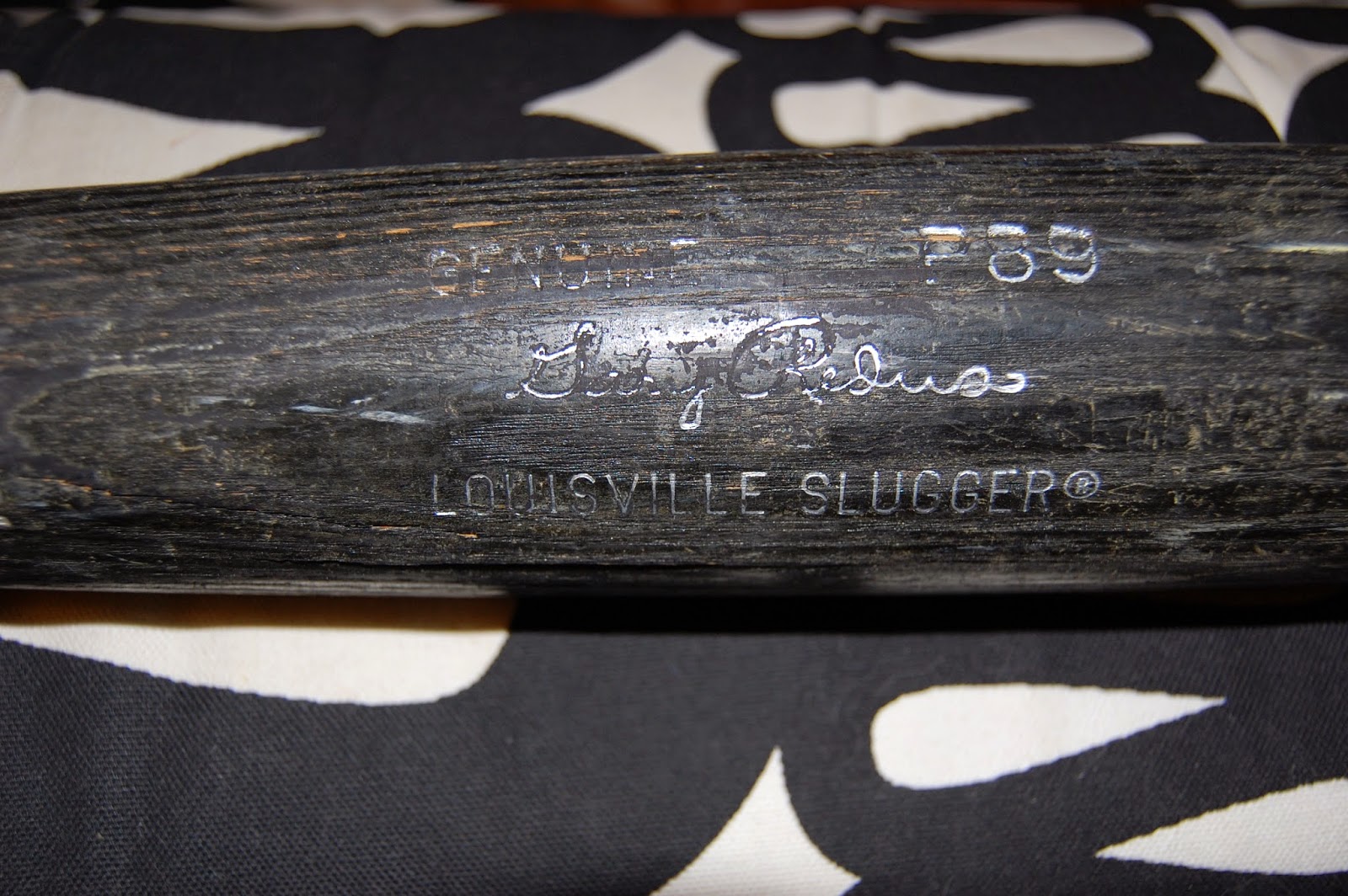 I think the bat came from the 1988 season.  The handle has 21 written on it, which was Redus' number with the White Sox before a mid-season trade to the Pirates, where he took number 19.  His time in Chicago was the only point he wore number 21 in the majors, and would make sense with Bob's story that the bat came from a Pirates clubhouse attendant.  I'd imagine Redus finished off his supply of bats before ordering a fresh crop for 1989.

I felt pretty good that I had enough leverage to haggle.  I know the usual flea market shoppers, and had a pretty good idea of what kind of merchandise Bob is able to turn over and what sits.  His football jersey supply was different every time I've been there, but many of the baseball jerseys were the same ones I had seen early last summer.  And the fact that the gamer bats were sitting alongside ones little Timmy used in his back yard probably meant there wasn't any great financial or sentimental attachment.

So sticker price?  $130.  But I knew there was no way I was paying that.  Bob shot me a number of $95.  I countered at $85, and was a little surprised when he said that sounded good.  More than I had planned on spending?  Definitely.  But apparently Kate knows my collecting habits better than I do.  As I tried to gently explain why all these items were such a great deal, she cooly cut me off and said, "It's fine.  Why do you think I stopped at the ATM?  You always end up finding something."  Guess I've got myself a keeper.

Anybody familiar with old player model gloves?  I was a little surprised to be unable to find a match to the Campy glove on ebay or elsewhere online.  It's a Wilson model A2400 with some kind of interlocking webbing.  I'd imagine it's from the 50's or early 60's, but that's purely a guess.  If anyone knows of any resources or guides for glove collecting, I'd love to hear about them.  The last thing I need is another thing to collect...but...man, this glove is cool.  I can't wait to see my dad's face when I show it to him.