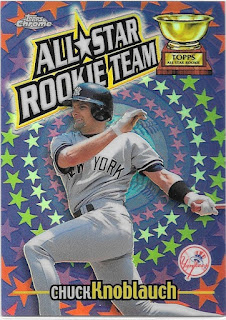 Yesterday, I showed off some of the less than stelar star power from my 2000 Topps Chrome Refractor set-in-progress.  Today I'm back with the inserts, which thankfully have a little more pop behind them.

The thing I really loved about early Chrome sets was the fact that the sets almost completely mirrored the base sets, inserts and all.  As card releases moved away from being insert driven, the paralleled inserts and refractors quickly dried up.  But from about 1998-2001, the Chrome sets feature some absolutely awesome looking cards.  And the refractor versions?  All the better.
In the Flagship 2000 set, foil was all the rage.  Obviously that doesn't translate to Chrome.  But Topps really stepped up to the plate this year.  Even without the foil features, the insert sets still carry a significant "wow factor" that really pops on the card.  The All-Star Rookie Team is by far my favorite insert in the set. 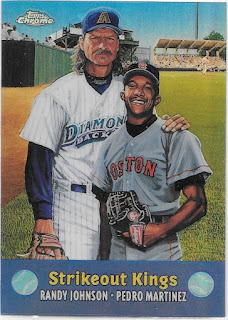 But the set boasts a nice range in both design and player selection.  Sure, most of the "can't miss" type guys from the late 90's ended up being big time flops.  But that just makes the cards easier to track down. 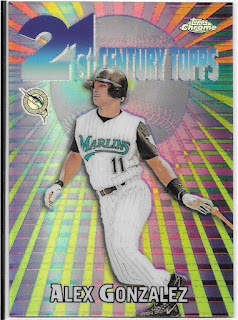 In fact, I have been having a much easier time getting the inserts at a cheap price than the base refractors.  And I guess the math checks out.  Refractors fall two per box, but there are nearly 500 cards.  While most of the refractor versions of the inserts are much tougher pulls (falling about once every other box, in most cases), the sets are much smaller. 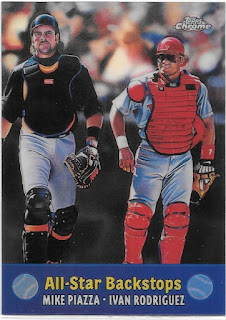 Not that I'm complaining. 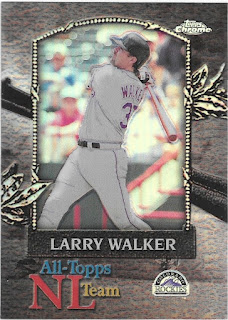 I love the look of the cards.  And even if the master refractor set might be a long ways off, I'm holding out some hope that knocking out the insert sets might be a realistic goal within the next year.
Posted by Mark at 8:34 PM