Back to the Work Bench

I had a pretty exhausting day at work.  You know, the kind where you just wanted it to end at 10a.m because you knew things would only continue to get continually worse.

So by the time I got back home, I needed something to just let me mind relax. 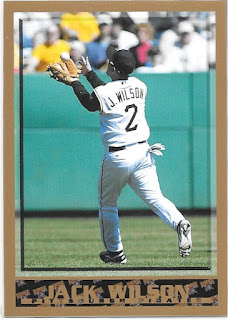 So off to the computer I went for a little r&r with my custom projects.  This is really the first time I have worked on new projects since the early spring.  But it was nice to get back into the swing of things, and the first day I can remember when I wasn't worrying about something that needed done at work or at home. 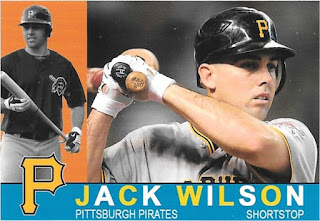 I've been slowly plugging away at Jack Wilson cards in every Topps design.  Obviously the 2002-2012 years are already covered.  But it's going to be  tough challenge to replicate the photo quirks of each year going just by the limited photos available online.  I've been avoiding the early 50's and 60's releases, dreading the lack of portrait and posted photos available. 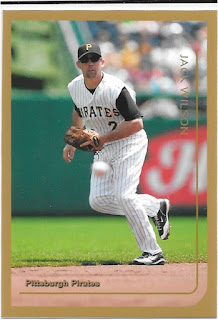 Still, it has been a fun project to chip away at.  And considering how much my Jack collection has slowed in recent years, it's a nice little side project to add to my collection of my favorite player. 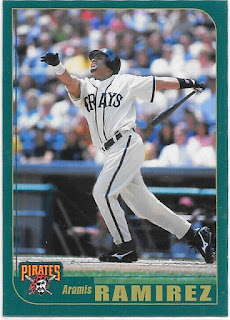 Speaking of projects...
As I was sitting at the computer, I had a little spark of inspiration for a new project that may eventually become a feature on the blog.  The Pirates got even less hobby than they deserved (which wasn't much) during the 90's and 00's.  And even during the years where Topps Traded was supposed to fill in the gaps, the Pirates were sorely under-represented.  After all, they were almost never buyers at the trade deadline - and the lone year they were, 1997, Topps didn't produce a Traded set! - and prospects were sorely lacking as well.  So...I introduce you to Topps Update Update.  I'll be filling in the gaps for some of the players, coaches, or league leaders who got passed over during The Dark Years.  First up will be 2001, though I may need an ink refill before the printed version becomes a reality.

Somehow Aramis Ramirez was absent from the 2001 Topps set, despite having a break out season.  He hit .300 with 34 homers, and had played in parts of three big league seasons (with 2 Flagship cards)  in the previous seasons.  But maybe it's a blessing in disguise, since it gave me a great excuse to use this awesome photo of the Pirates wearing throwback unis from 2001.
Posted by Mark at 10:30 AM