I've slowly started weeding through my 200-card COMC order that came in a couple weeks ago as part of their Spring Cleaning promotion.  For most sellers, I imagine COMC amounts to the scrap heap - a place to sell cards they couldn't move on ebay with ease.  And that's fine with me.  After all, I always pride myself on my collecting patience.  Sure, it's come back to bite me in the proverbial collecting ass (Andrew McCutchen).  But on the whole, I usually have pretty good results waiting for the initial wave of excitement to die down around a card before snagging my copy. 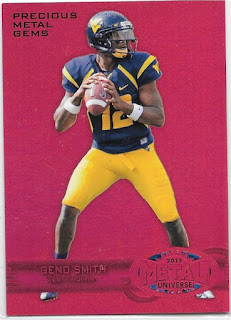 I was planning on having a sizable Geno Smith collection as the NFL Draft approached a few years back.  And then the Jets called his name, and my hopes were almost instantly dashed.  Huge market with a quarterback crazy fan base?  While I would have much preferred to see Geno succeed, his cards have become more affordable in recent months.  And this Precious Metal Gems card is one of my new favorites in my collection.  And at a cool $3, I couldn't be happier. 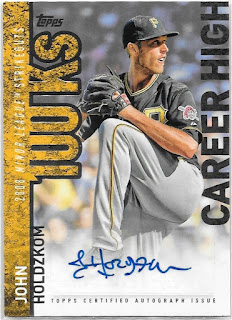 Speaking of prices cooling, John Holdzkom went from being one of the hottest names in Pittsburgh to a bit of an afterthought these days.  When Series 1 went live, this card was selling in the $5-10 range, and I was bummed when I didn't pull one out of a case break.  But Holdzkom has been in the minors this season, and middle reliever autos aren't the type to stay hot for long.  I was thrilled to snag a copy for about $2, though I could probably get one for half that in a couple years, even if Holdzkom does regain the form that made him an overnight sensation last year. 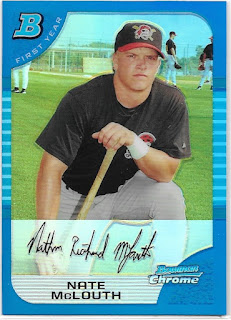 I guess that's the funny thing about this hobby.  Everybody is ready to jump on the next big thing.  Until the next big thing comes along.  Even if a player goes on to have a solid major league career, their prices are almost inevitably going to decline in value.  It's just the nature of the hobby, but I'm more than happy to let that work in my favor.  In 2005, this card was probably a $3 card.  In 2008, it was a $30 card.  And a couple months ago, I was more than happy to buy it for $1. 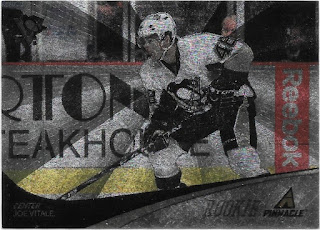 But it's not really about the price paid, print run, or serial number.  I've really narrowed down my collecting focus - I like cards that look cool.  Whether it's $.10 or $10, if it looks nice that's what really matters to me.  Of course I do tend to stick closer to the $.10 end of the collecting spectrum. 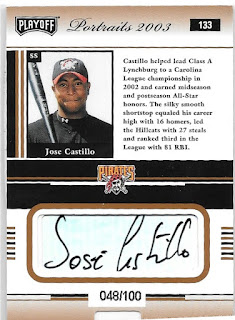 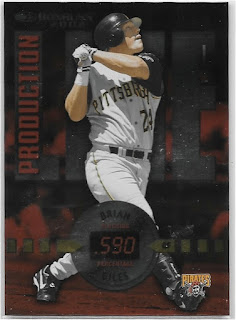