It's the Big One, Elizabeth 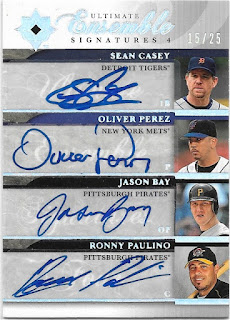 I'm not someone who considers myself to have much of a want list.  When it comes to my team collections, it's more about finding a card I don't have at a price I like.  There just aren't many cards out there that I'm actively prowling for that very card specifically.

In the days before half the products being high end releases, it was touch to find higher end Pirate cards even worth chasing.  Multi-player autos of multiple Pirates players were exceptionally rare.  So when I first spotted this quad auto in 2006, I just about lost it.

And then I realized that Perez and Casey were both listed playing for other teams.  Both players had been dumped mid-season (Casey on his own bobblehead day), but Upper Deck was notorious for being slow to update player movement.

Just not when it benefitted the Bucs collectors.  Somehow the team at UD managed to change the design and photos to accommodate the move to larger market clubs.  Meanwhile, they would still be releasing Adam LaRoche Braves cards two years into his Pirate tenure.  But I digress...

For years, this was a card I desperately wanted, but refused to add to my collection due to the team switcharoo.  But time and general disinterest in current products heals all wounds.  And this card shot back near the top of my want list over the last couple years.

At 25 copies, it's not the easiest to find.  But I was thrilled to find one on ebay from a Canadian seller (Bay is Canadian, and had a pretty strong collector base up north at the peak of his career), and won the auction for about $7.  Even though I'm sill a little salty over the non-Pirates, I'm thrilled to add this one to my collection. 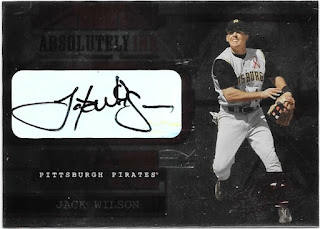 And if snagging one card off my want list wasn't good enough, how's two?  While this looks like just an ordinary Jack Wilson card that doesn't scan particularly well, it's long eluded me.  This is supposedly the common, unnumbered version of this auto that also has a blue parallel /15 and a gold parallel /10.  But as was common with Donruss' autograph inserts, the number of cards for each player was often pretty irregular, depending on how many stickers they had available.

In the decade plus of looking for this card, I had only seen one copy.  And that one was in the collection of a fellow Jack collector.  It's "common" status was pretty misleading.

I already have the blue parallel, and still need the gold to complete the run.  But I was thrilled to land this one for just $5.  It's been slow goings adding to the Jack Wilson collection in recent years, but that just makes each new find that much more enjoyable.