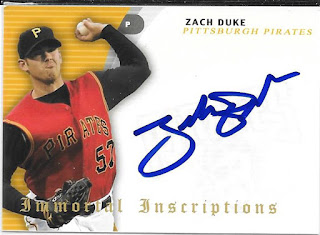 There are a lot of nice things about moving (aside from the actual moving...that was terrible).  Going from driving an hour each way to being 10 minutes from the office is nice.  Not tossing a rent check into a financial black hole every month is great too.  But the best part?  Being able to stretch out a bit.  Our is a cape cod with about 1,400 sq. ft.  It's not huge, but after living in apartments or dorms since starting college, the idea of not having to store all your extra stuff in the same spot where you're also trying to live is a real nice change of pace.  And from a collecting standpoint, it's nice to be able to actually have my entire collection (well, mostly.  I still need to unload a few more boxes from my parents' house) in one place.

It had gotten to the point where new cards that came in were just getting tossed into boxes to be dealt with later.  There was no space to sort through them in our apartment.  Well, later has finally come.  There are probably 6 months + worth of mail that had just been added into boxes.  Cards that, for the most part, I had taken a quick glance at and then into the box they went. 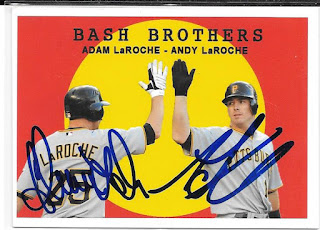 In with that group were come customs that my collecting pal got signed for me during Spring Training this year.  She lives right near the White Sox camp, and I was able to whip up customs for lesser known players who didn't have many cards.  And she was gracious enough to get a few signed for me as well.

These two are by far my favorite.  It's almost impossible to find a photo of the LaRoche brothers together from their time in Pittsburgh.  This shot was the best I could do, even though I'd have liked to have both guys facing forward.  Andy signed this last year when he was in Sox camp as a non-roster invitee, and Adam apparently finished it up before he left the team this spring.

And the Zach Duke card is one of my new favorites, custom or otherwise.  Though they only wore them for 2 seasons and across a couple dozen games, it's amazing that no photo of the Pirates "McDonald's" vest made it onto cardboard.  Heck, even finding photo evidence that the jersey existed is tough.