What Was Your Favorite Year to Collect?

This year has been both one of the busiest and slowest in my collecting life.  I made my first trip to the National, have blown by many of my collecting goals for the year, and have added some great cards to my collection.

But I have also had almost zero interest in the cards released this year.  Aside from participating in a few group breaks and buying maybe a dozen cards on ebay, I have done little to add 2014 cards to my collection this year.  I don't know that what has been released has changed dramatically from the past two or three years.  But at this stage I couldn't care less about Gypsy Queen or A&G.  I don't want to chase 30 different Topps parallels.  And I sure as heck don't feel like shelling out the money for high end products that will leave me with the same swatches of fabric I can find in from a $2 pack. 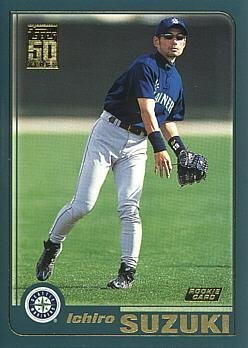 It may sound jaded.  Well, it definitely sounds jaded.  But I still love collecting.  And this year has also given me the chance to reconnect with the things I absolutely love about this hobby.  I made a lot of progress on transitioning my 13,000+ Pirates cards from boxes to binders, neatly organized by year and set.  The chance to go through me entire collection time and time again, placing the cards in the appropriate pages and getting to see the parallels all lined up together or that team set finally fill up its pages has been a lot of fun.  And I also started playing around with recreating some of my favorite designs for custom cards.  It's been a blast breaking down each element of my favorite designs and seeing what really makes the card work.

So I ask you:  What was your favorite year to collect, and why?

For me it was 2001.  It was the first year we had a season ticket package as PNC Park opened.  A slick fielding rookie shortstop for the Bucs sparked my interest in a focused player collection.  Donruss came back to the hobby, and delivered some fantastic products.  And a rookie class driven by two true, unquestionable rookies that will end up in Cooperstown someday soon had the hobby buzzing.

Packs were still fairly reasonably priced, and most products came in in the $3-4 range.  Game used cards still meant something, and despite the rise of sticker autos there were some really nice products released.  And the rise of the numbered card was just hitting its stride, with almost every product yielding a nice number of serial numbered cards without the number or creativity of the parallels yet reaching mind-numbing levels.

2005 - 3 major manufacturers, a ton of products, and what felt like a billion parallel cards to chase.  And at year's end Donruss went out in style, delivering some of the most loaded products the hobby has ever seen.
2000 - My first year back into collecting.  There was nothing that could beat a trip to the LCS after school, and a time when there were still probably 5-6 card shops within half an hour of my house.

So let's hear those stories of fond nostalgia.