There's little doubt that the 00's in card collecting will be known for the explosion of colored parallels, just as the 90's were known for inserts.  The color-me-crazy fad that had collectors up in arms and partially led to the downfall of Donruss and Fleer has been exploited to the Nth power by Topps in recent years. 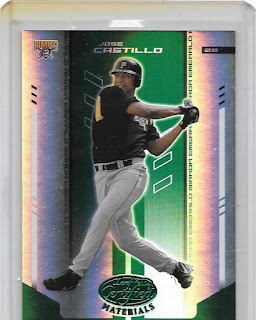 It gets a little exhausting after a while.  But a select few of those parallels are just priceless in my eyes.  And the LCM Mirror Emerald cards are right near the top of that list.  At just 5 copies, they were consistently rare, unlike Topps numbering that often jumps from year to year.  And they looked daaaaaamn good.  This is actually my third emerald from the 2005 set, and I was more than happy to pay a mere $4 for this guy to come into my collection.  All hail Jose Castillo, 2B of the future...from the past.