I have to admit I've never totally gotten the concept of the playoff beard.  As someone who has had a tuft of hair thick enough that birds could have been living in it without my knowledge for the past five years, I've always been a little off-put by the beard bandwagoners who feel they can only justify their facial hair for a playoff run.  The beard, after all, deserves year round celebration. 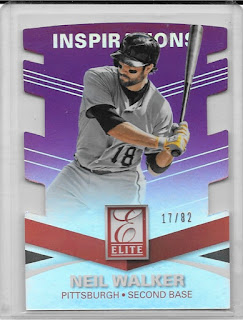 My beard has been a state of shambles lately.  I went clean shaven for my interview for the new job a few weeks back.  Don't get me wrong - I'm not one who struggles with facial hair.  Thanks to my Italian roots, I look like that scene in Tim Allen's The Santa Clause where he shaves his beard at night, and wakes up in the morning with a full beard.  But still, when I have, at points, looked like a less aged member of ZZ Top, my current state of facial scruff is a sad call from my glorious full beardedness.

And in all honesty, I would gleefully take the chance to watch the Pirates sad attempts at beard growing in October in some alternate universe.  Instead, I'll live vicariously through my cardboard.  This card came in the day before the wild card game.  Aside from its awesome die-cut-ness, I appreciated the full bearded Neil Walker.  The Pittsburgh Kid was rocking a beard for a good chunk of last year from what I recall.  It's not a playoff beard, but at least it's a nice beard.