I've been scouring ebay more often than usual lately.  And while that has mostly mean I've just been getting outbid a lot, I have added some cool pickups for great prices. 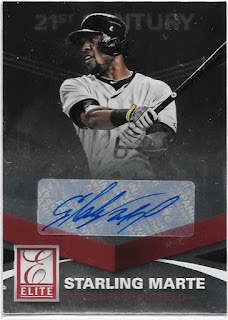 Like this Starling Marte autograph.  Marte has been one of the players to see a big surge in popularity and card prices as the Bucs have been winning.  I usually snatch up any auto of his I can find on the low end at $4 or so, but even those are rare.

I had this one in my watch list, but it's not the most eye catching auto, so I figured I'd throw in a low bid.  But winning?  Probably not.

And going off ebay's completed auctions, that's the lowest a Marte auto has gone recently by a pretty fair margin.
Posted by Mark at 1:00 PM