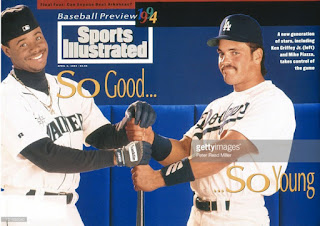 The whole "getting older" thing is starting to become a reality for me.  And I don't know that there are many markers that will make that more clear for me than The Kid heading into the Hall, a kid no more.

For me, Ken Griffey, Jr. was the player that made buying a pack of baseball cards worthwhile if you pulled his card.  Or enticing to buy in general just by having him on the packaging.

He was the epitome of cool, backwards baseball cap and effortless gallop.


While I fully admit the aura of childhood and ESPN catchphrases added to the hype of Griffey in my mind, I don't know that there is a player who I have watched play a game so effortlessly as he did.  And say what you will, but there is no player out there who I would rather see as the player to receive the highest percentage of Hall votes.  And it's a damn shame anyone out there thought him unworthy, for whatever their twisted personal cause. 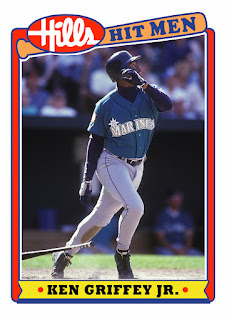 He brought a degree of fun, excitement, and anticipation to a game where 90% of the action is inaction.  Everything about my own baseball playing was built to mimic my favorite player.  From my Junior model glove and bat to my left handed, upright stance.  But no matter how many hours I spent swinging, I could never find a swing as sweet as his.  I don't know that anyone ever will.  It's simply the way baseball was designed to be played. 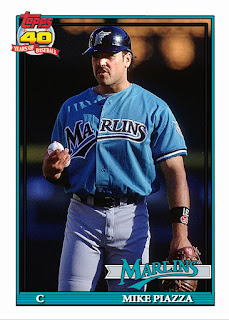 It's strange to see two players I grew up watching not only reach the twilight of their careers but now take their place amongst the immortals, their playing days a memory just the way Clemente is to my father or Mays to my grandfather.  Players who played so effortlessly that it's almost impossible for the next generation to envision.  And maybe I'm lucky in that regard.  At least I'll have some youtube clips to back up my argument when my future kids claim that the next great player is the best thing to ever touch a field.  But of course I'll always be right.  And Junior will always be the answer.