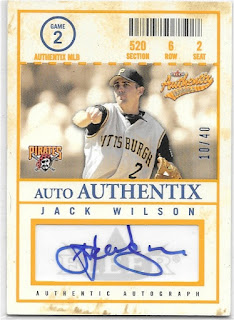 The dying days of Fleer were a wild ride.  Before the bankruptcy auction, unfilled redepmptions, and brief, zombie-like, resurrection under Upper Deck, the writing was on the wall.

It's a period I'd imagine few would reflect on fondly, and even fewer collectors even think of at all.  But Fleer was my brand.  While Donruss delivered the best value in my eyes, I loved Fleer's overall products.  Their designs were unique, never afraid to incorporate foil or color.  The cards has an element of whimsy that I loved, and while not perfect their embedded stickers were at least a step up from the silver rainbow abominations used by Topps and Donruss at the time.

And Fleer showed love for my favorite player, Jack Wilson.  Jack was coming off an All-Star year in 2004.  And while the Pirates weren't well-represented in card sets across the board at this time, Jack managed to fit his way into most of the Fleer releases of the day.  Better yet, they had included Jack in quite a few of their autograph checklists for the 2005 season, almost all of which were inserted as redemptions.  Donruss had some autos as well, but I believe those were reused stickers from his rookie year 2001 signing session.

So Fleer was it.  And the checklists looked glorious.  Autos, patches, high end cards to chase galore.

...except most of them never saw the light of day.  Most of those redemptions went unproduced and unfilled.  The company went under.  And my collector dreams were crushed.  For quite a few years, it was still hard to get a clear sense of what was or wasn't released.  Beckett's checklist continued to show cards that I was fairly certain were never produced, but could never be quite sure.

Fleer Authentix was right in the thick of the chaos.  Jack had an autograph that was inserted into products with versions /100, /40, /5, and a 1/1.  There were also supposedly patch/autos inserted as redemptions, which Beckett still shows on their checklists.  I've long assumed the redemptions never existed.  And I have a copy of the auto /100, so I knew that one made it out the door.  But the lower numbered autos?  I had never seen a copy.  A card /40 typically isn't impossible to find, especially when you've been regularly scouring online for anything and everything of a player for the better part of two decades.

But a few weeks before Christmas, I spotted a copy on ebay.  The price was a little high, but I had a $10 ebay coupon that made it a no-brainer.  Not bad for a card you weren't even sure existed.

Anyone else have any run-ins with the chaos of Fleer's dying days?
Posted by Mark at 10:34 AM