Catching Up on Customs 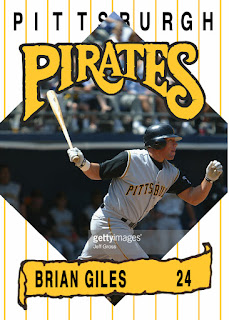 I guess I'm an "all or nothing" kind of guy.  During my extended hobby break in 2017, I didn't just stop buying cards.  I stopped making them too.  Creating customs has been one of my favorite hobby-related projects in recent years.  They've been great for autographs, and I've slowly been working on creating "complete" team sets, filling in the gaps of players that Topps overlooked in the flagship and update sets for a given year.  But even my arts and crafts projects fell by the wayside during my cardboard break.

But there were a few cards I had either completed before my blogging tailed off or ones that I've recently put together that are fun enough to show off.  The card to the right is based off of the team-issue 1989 Very Fine Juice Pirates set.  Pinstripes, Pirates wordmark...there's so much to love.  I was so excited about the set that I was about to buy one of the originals for myself off ebay, but ended up forgetting to bid before the auction ended.  Good thing I did, because a couple weeks ago I discovered I already owned two complete uncut sheets of the set.  Guess I really do have too many cards... 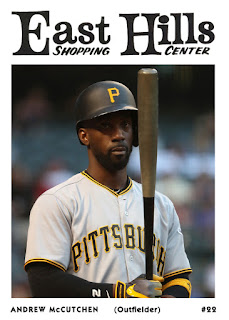 Another local oddball card I put together was the Pirates East Hills Shopping Center set.  Built in 1960, it was a major outdoor mall in the area until indoor malls came into fashion in the 70's.  The 1966 set has oversized dimensions, but i modified the design slightly to match the standard 2.5X3.5 card size. 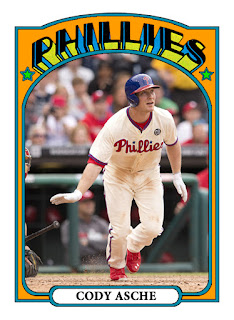 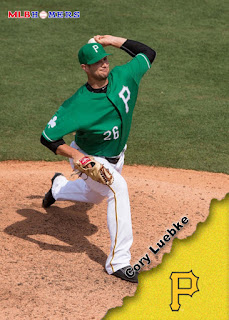 Both the Luebke and Asche (apparently there's a theme of guys who have e's at the end of their last name) are part of a batch of customs I made for one of my collecting pals who lives in Arizona.  She gets a ton of autographs during Spring Training, and I'm always happy to put together customs for some of the lesser known guys who don't have any/many cards released. 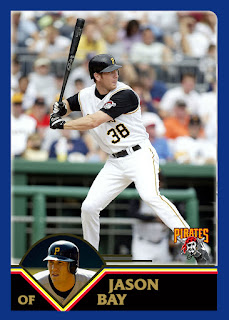 The 2003 Topps design is one of my favorites, and one of the first customs I tried to create.  I wasn't 100% happy with the results though.  The fine lines between the photo and the name box are a real pain to get just right.  So much so that Topps doesn't even bother with it!  I was looking at a Jose Rijo Archives auto from last year that used the 2003 design, and noticed that they had skimped out on the fine white line that runs between the red and yellow stripes.  But I'm neurotic enough that I kept fiddling until I got it right. 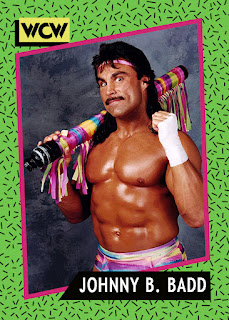 And finally, a little something different.  A wrestling custom.  Since I've been gone, I have started watching (re-watching?) early-mid 90's pro wrestling from my childhood.  My wife things I'm absolutely nuts.  But I decided to try my hand at a couple wrestling card designs from the era.  The design is from WCW's 1991 card set made by Impel.  It was actually the first box of cards I ever opened - my mom bought me a box sometime in the early 90's at local discount store World of Values.  The design just screams early 90's, and was pretty fun to recreate.

The original card set had a pretty limited checklist - just the top of the card guys, who all had 4 or 5 different cards in the set.

I'm hoping 2018 will involve more customs, and hopefully picking up on some projects that I never got to a few years back.