If you're reading this post, you probably know I love dime boxes.  Maybe not quite enough to name a blog after them, but still...a lot.  You never know what you'll find in a box.  And while I've never found a Clemente rookie, I have found plenty of awesome cards while digging through dime boxes.

Most of the time I'm hunting for Pirate cards, and grabbing anything else that catches my eye.  And I've definitely come across some unique finds in dime boxes - magazine inserts, 80's oddball reprints, Starting Lineup cards.  Maybe even the occasional Pokemon, Magic the Gathering, or non-sport card.  Or even a Benchwarmer card.  Not your typical dimebox fare, but definitely not something that seems out of place.

But I was at a card show a few years ago, flipping through cards, when something a little unusual caught me off guard.  Not "hide the wife and kids" unusual, but still enough to get me to pause and stare. 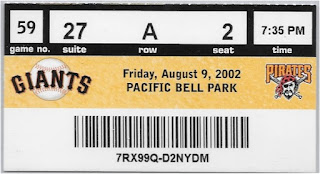 It was a ticket stub.  But...a part part of a ticket stub.  About an inch wide and three inches long, just the right size to neatly fit in with a stack of baseball cards.  But there was a Pirates logo, so into my stack it went.  It is, after all, a dime.  But that was about as much thought as I gave the stub, and went back to flipping through the box.

When I got home, I was going through all of my new purchases.  As I flipped through the stack, I would lay each card face down in a pile.  When I got to the stub, I again thought "huh, that's odd."  It says Pac Bell Park, which, if you're keeping score at home, is not very close to Pittsburgh.  I had figured if it was a Pirates stub, it was from a home game.  And again, that was about as much brain power as I cared to exert on the stub.  I flipped it over, continuing through the stack.

And then I noticed something on the back of the ticket stub. 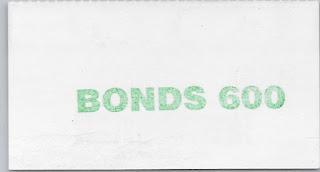 Business is about to pick up...

Bonds was far from done hitting homers.  Still, it's a cool piece of baseball history to add to my collection.  But a lot of questions remain.

How did the card end up in a dimebox in Pittsburgh?  Was there a Bonds fan in the Burgh that wasn't jilted by his exit from Pittsburgh that flew out for the game?  Where the heck is the rest of the stub?  Was it torn off by an usher at the game (there's perforation marks on top), or separated later?  And a suite ticket?  That can't be a cheap seat.  Maybe if they revive Unsolved Mysteries I'll see if I can get them on the case.  In the mean time, it's a fun piece of baseball history for my collection.

Any odd or unique finds in your dime box digs?