I think for most of involved in this hobby, we've always been collectors.  Over the years, I've always saved stuff, even if they weren't proper collections.  As a kid, I saved all the cardboard backings on my action figures.  And Lego directions.  And the boxes to my old video games (which I threw out about 6 or 7 years ago, right before realizing that some mint video game boxes sold for almost as much as I had paid for the games new).  I collected sports cards and Pez dispensers, and stamps, and whatever else seemed interesting to a kid.

And among all that "stuff," I saved ticket stubs.  As a kid, we went to a handful of games a year, so my stub collection was more a couple scraps of paper in the back of a binder.  As I got hit my college years and PNC Park was just a short walk away, that number grew tenfold.  And so did my stub collection.

I'm sorry to say that it's probably the least organized part of my Pirate collection.  Media guides, programs, and other random Buc-related stuff at least has some semblance of order.  But my stubs?  They're all tossed in a box, not much different from when I was 10.

After we bought our house, I started migrating a lot of my "stuff" from my old bedroom at my parents' to our house (which Kate was thriiiiiiilled with).  I was amazed with some of the stuff I came across, including random piles of ticket stubs.  While I can't guarantee I have a ticket from every game I've attended, it has to be pretty darn close.

And while a lot of them are just boring computer printouts, there are some cool ones.  Like the 2008 ticket above that used featured Topps' flagship design for the year.  Or the 2013 playoff ticket at the top of the post.  Eventually I'm hoping to get some sort of framed display with some photos and my tickets from the 2013 playoff run.

And one of the craziest things is seeing how ticket prices have jumped, right alone with player salaries.  Adjusting for inflation, a $4 ticket in 1998 would equate to about $6 today.  For 2018, the cheapest ticket for a weekday game at PNC Park is $19. 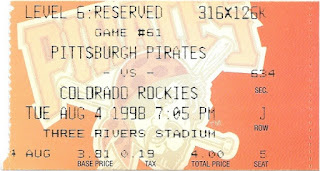 One of these days I'd love to take a deeper dig into my ticket collection.  I honestly have no idea how many games I've been to, or what gems I've forgotten.  I was at the entire 2013 playoff run, Home Bailey's no-hitter, and some other special games that stick out in my memory.  Like a 2007 game where Barry Bonds hit 2 homers in the freezing cold, was pulled from the game, and my dad and I headed to the car.  Or the two 15-inning games I sat through in 2006.

Anyone else have any special or memorable ticket stubs in their collection?
Posted by Mark at 1:23 PM