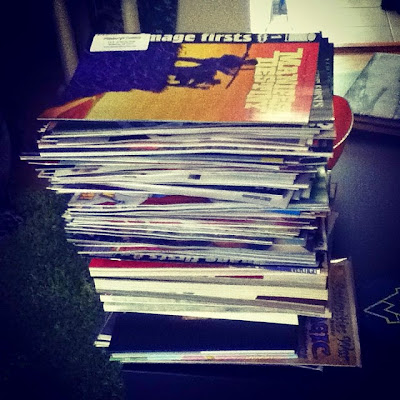 Things have been a little crazy for me lately.  The good kind of crazy.  The kind where you see friends you haven't seen in too long, spend your weekends out of the house enjoying the weather, and take your cat for a walk.  Yeah, you read the last part correctly.

I've had a bunch of packages filter in over the last couple weeks, but haven't had a chance to dig in yet.  So a big thank you to everyone who sent stuff - cards have been on sort of a long overdue pause to go back to enjoying real life.

And this weekend was certainly enjoyable.  On Friday, Kate and I met up with two of my best friends from Morgantown to see the Avengers movie.  They stayed overnight in Pittsburgh, and we reconvened early in the morning on Saturday to hit up Pittsburgh Comics for Free Comic Book Day in what has become an annual tradition.

I'll be bringing things back to cardboard in a second, so bear with me.  My relationship with comic books is a little unusual - I didn't read a single comic until I hit grad school, but since then have fallen in love with the medium for storytelling.  What can I say?  I'm a lit nerd.  But jumping into comics can be a bit daunting as an adult - I had decades worth of characters, stories, and choices to sift through while also having the time commitments that come with being a grown up.  So I pretty much stick to reading the collected graphic novels rather than reading individual comics each month.  And FCBD is prime time to take advantage of some deals, along with picking up the free comics.

But here's what interests me:  by pretty much all accounts, FCBD is a high hit throughout the comic book industry.

For card collectors, you may remember free trading card day, which lasted for a few years in the mid 2000's.  It was actually started right around the same time as free comic book day.  But on the card side of things, the promotion always felt like a huge flop.  I went and bought whatever I needed to buy to get my free cards, but there was really no excitement, enthusiasm, or marketing behind the event.  And I wasn't surprised to see it disappear after a couple years.

But how can one free event tank, while another flourishes?  After all, Americans love free shit, myself included.  And from what I understand, it seems like comics and cards follow a pretty parallel path.  They were basically kids entertainment in the early-mid 20th century.  As the speculator boom rose in the 80's, both saw huge surges in the market for vintage copies, which were then followed by a gilded era of overproduction and speculation.  By the 1990's, artificial scarcity, an over-saturated market, and insane production numbers caused the market to crash.  The result was the closure of tons of comic stores, which was only exacerbated as ebay entered the picture.

And both industries face many of the same conversations over how a physical product can survive in an increasingly digital society.  In fact, comics may be even more harmed than cards.  If I wanted, I could download a digital copy of just about any comic I want off the internet for free.  While things like Topps Bunt have added a digital component to card collecting, you still more or less need to track down the real thing (unless of course you have some kind of weird card image collection).

It's not apples to apples.  Comics are en vogue among the hipster crowd, along with vinyl records.  And comic book characters have become the hottest media property on the planet in the last decade.  And there is definitely a difference between a hobby that can have some intrinsic entertainment value - actually reading a book - than simply hoarding cardboard into your chosen box or binder.

But it does seem a little strange that one free giveaway day inspires absolute craziness, while free card day is a forgettable event that even many collecting at the time may not have known about.