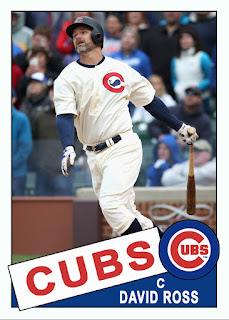 I had a few requests in my post yesterday to see the custom cards I made for Tom over at Waiting til' Next Year.  These customs were a ton of fun to make.  Anybody who follows my blogging knows I'm a huge fan of unique photos and throwback uniforms.  Surprisingly, there weren't really that many photos of Ross as a Cub to pick from.  So my hand was forced, not that I minded.

This super cool throwback uniform is also the first time I've had the chance to use my 1985 Topps template, which was one of the years Tom said he really enjoyed the most.

And I was happy to make these cards not just for the design challenge, but because this isn't the first time David Ross and I have crossed paths.

David Ross was a Pirate.  Even if you're a Pirate fan, you might not remember that.  He suited up for 40 games for the Bucs in 2005.  And while it might not have been the most memorable to most, I loved his hard nosed, gritty style of play.  And despite some rough looking offensive numbers, I remember him having a few clutch hits during his time in Pittsburgh.  He quickly became one of my favorite players on the team, but was cut loose shortly after. 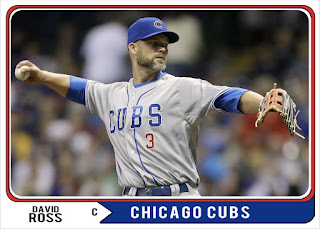 But that wouldn't be the last I'd hear from Mr. Ross.  I was standing around PNC Park before a Pirates/Braves game.  The Braves were wrapping up batting practice, and I think I was either on the phone or getting ready to make a call standing under the bleachers in LF.  All of a sudden I saw a ball come flying to the back of the lower bleachers, bounce, and roll about 10 feet away from me.  I ran over and quickly snagged it up, and then just as fast moved towards the field to figure out who was taking BP and had smashed this glorious gift for me.  It was David Ross.  It's only the second ball I've gotten from a game despite having attended a few hundred games.

Oh, and in case you're wondering, the photo for the second card came from a game where Ross pitched an inning in mop up duty.  I hope Tom enjoyed the cards, but I had an absolutely great time finding a photo and design that would work and putting them together!