Along with a new job came the discovery that work can, apparently, be a lot of fun too.  My new position includes overseeing programming for our part of the United Way's middle school mentoring campaign.  It's really a great concept - middle school kids are paired with adult mentors from the community and local businesses.  The sessions are once a week, usually during lunch time for the kids, and only last about 45 mins.  But you'd be amazed at how much of a difference having a good, professional role model and presence can make in the development of these kids. 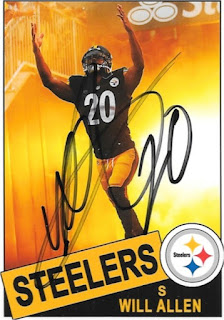 So I spent yesterday morning at a recruiting event for the middle school mentoring program.  The United Way did the leg work - I just had to show up at one of the big banks downtown, smile, and try to recruit new volunteers for the program. 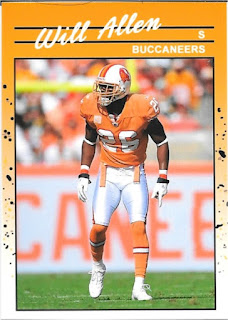 Added perk?  The United Way had arranged for Steelers safety Will Allen, who is very active in trying to give back to the community, to appear, sign some autographs, and hopefully convince people to show up so I could swoop in and tell them about mentoring. 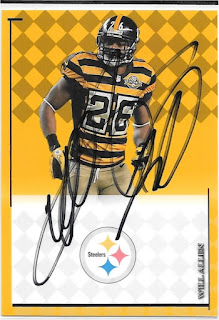 It was a great event, and I'd strongly suggest looking into any similar mentoring programs in your area.  For a very small commitment of nothing but your time, you really can make a huge difference in the life of a child.

And now that the PSA is out of the way, I did print out a couple customs the night before.  You know, just in case.  Considering the Steelers had a Monday night game all the way in San Diego and Allen banged up his ankle in the game, I was amazed he still made it there right on time at 11:00.  Talk about committed.

Ok, maybe it isn't the prettiest signature in the world.  And I was a little bummed when he said he doesn't sign anything from his time in Tampa Bay.  But still not bad for a morning's work.
Posted by Mark at 11:30 AM