I Can See Clearly Now

With 2015 just hitting the streets, it seems fitting that I'm just getting caught up on last year's release. 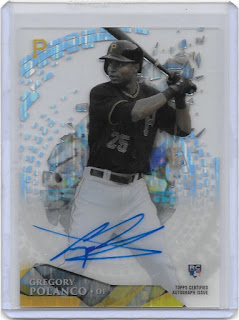 2014 Tek was one of my favorite products, but the Pirates were left in the cold with only one player in the base set.  And of course that player had to be a well regarded rookie.  Polanco's cards were selling well last year, and that made finding solid prices on his Tek cards tough.

But as his prices have cooled, I've been able to add to my Tek rainbow.  At about $12, this auto /50 ran me about what I paid for the regular base auto nearly a year ago.  But live and learn.  I'll have a more targeted strategy for chasing down the Bucs in this year's release.