A Weekend at the Card Show: It's All About Relationships 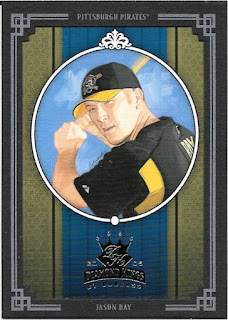 I just had the best two days of card show buying that I've had in a long, long time.  As I mentioned in my last post, the annual big Pittsburgh show had become increasingly vintage heavy over the last couple years.  Well, fortunately that trend headed in the other direction this year.

While it was still lacking in some areas when it came to hot recent releases like Bowman, there was a wide selection of dime boxes and mid-end cards that were right up my alley.  I'll have a couple more broad recap posts coming up over the next few days.

But today I wanted to drill down a little further on why I love going to card shows to much: the people.

Don't get me wrong.  I'm well aware this hobby has more than its fair share of scammers, obnoxious 12 year olds bragging about how much their collection is "worth," used car salesmen, and grumpy old men insistent that a card is worth its sale price circa 1992.  But there are also a lot of friendly, genuine people who share common interests in sports, cards, and who knows what else.

My favorite purchases of the weekend came directly from striking up conversations with dealers.

I'm a naturally chatty person.  If I'm going to spend 30 minutes to an hour standing at a table, neck hunched down killing my neck and back while going through box after box of dime cards, you can sure as hell bet I'm not doing it in silence.

I know many collectors have the approach that dealers are just there to total you up and take your cash at the end of the transaction.  But I like to strike up a conversation, and most dealers seem to be the same way.  After all, if you're spending the weekend standing around the same table all weekend, leaving only to occasionally run to the bathroom, a little friendly conversation is probably welcomed.

With the venue change from a university out by the airport to a convention center on the complete other end of town, I was genuinely interested in how traffic was for the dealers compared to years past.

I stopped by the table of one dealers who I have known from shows going back over a decade.  In the mid 2000's he always the best selection of Pirates inserts and autos, and would always have some Jack Wilson cards I needed.  He opened a shop a few years back, the local shows fell apart, and I haven't bought from him much since just out of circumstance rather than anything intentional.  He had some stuff out of current Pirates, but nothing that caught my eye.  I asked if he had anything else with him that wasn't out.

After rifling around in some boxes, he pulled out a couple small stacks and some random binder pages, saying there probably wasn't anything great there but I was welcome to take a look. 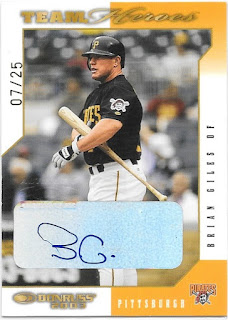 He was wrong.  I asked for a price on this Giles auto.  He said $3.  Even with the lazy initials autograph (remember when Donruss would have the players write nicknames or random stuff on stickers and then use those for the low numbered cards?  Yeah, this is what you get.  BG.  Very creative, Brian.)  The Bay black frame at the top of the post /25?  $1. 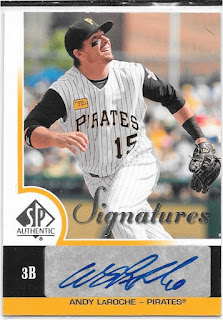 I also did find one card from his boxes that were out.  Everything was half book, so a little on the high side.  This Andy LaRoche auto is one I haven't seen before, so at $4 it was the same price as two much better cards of much better players.  But late 00's Upper Deck had some wonky print runs that were rarely announced.  And if I haven't seen the card before, odds are it's pretty uncommon.

I was thrilled with the prices, and very happy to add the cards to my collection.  But having dealers who know you, remember what you collect, and will give you a good price to move things they know you want, but you also may be the only buyer for?  You can't get that on ebay or COMC.  It was nice to chat about the local card scene, the lack of shows, and pick up three cards that may have been my favorite pickups of the show.

Because I also bought these. 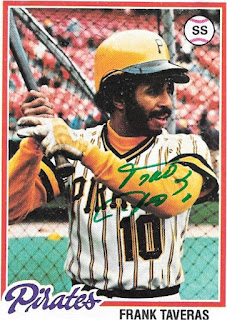 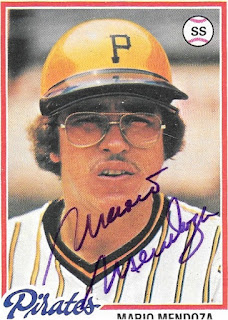 I was looking over a dealer's table.  He had some nice vintage out of my price range, and a small binder of 70's and 80's autographs for $1-2.  As I flipped through, he asked if I was looking for anything particular.  I said I was looking for Pirates, but it looked like most of what he had had already been sold.  I had picked out a Glenn Wilson auto for $1, and explained to him that I'm working on getting autographs of every Pirate who played for the Bucs from the end of WWII to the present. 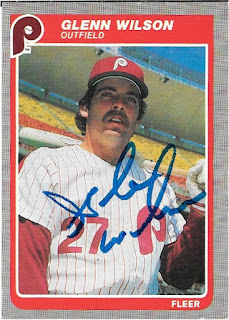 Wilson has a few Pirate cards, but they seem to be tough to find signed.  We chatted for a few minutes about autographs.  He's from Toledo, about an hour north of where I had lived in Lima.  Apparently years before we moved out there he did shows in Lima that were among the best in the area, but the card scene was dead when I lived there.

In the middle of our conversation, he said "Hold on." and turned around to grab a box.  It was a 800 count box of autographs.  He said he hadn't priced them out yet, but I seemed like an actual collector so pull out anything I needed and he'd give me a good price. 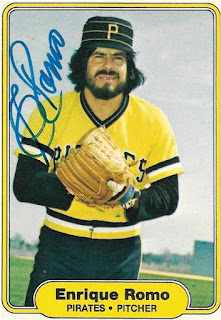 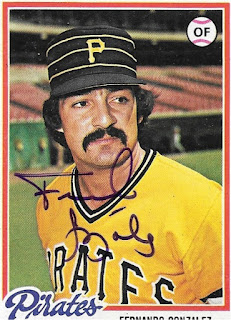 I found four autographs I needed.  All of these guys are Latin American players who are very tough signatures to get.  One of the big draws of the show for me had been that Mario Mendoza was signing.  He's been an autograph I have wanted to add for quite a while, but his signing prices are a little higher than I wanted to pay for mail-in signings.  But since he was at the show I was going to bite the bullet and pay $15 for an auto.

I asked what the prices were for the 4 cards.  He said $15.  The dealer knew what he had, knew Mendoza was signing at the show for $15 for one signature.  But instead I was able to add 4 tough autos, including Mendoza, for that price.  And I don't think any of that could or would have happened if I had just stood there silently looking through cards, handed the guy a dollar for the Wilson, and walked off.

It was a great show, and I added a couple hundred new Pirate cards.  But I had so many great conversations with dealers.  I talked with two guys from Delaware and Philly about shows out there and the crazy prices for Eagles players autos post-Super Bowl.  I talked with a lady who grew up right down the road from my house, and who apparently used to cut out of school to smoke not far from my back yard.  For all the frustrations in this hobby, for the greed and the dollar-chasing, there are some really interesting people.  It was fun spending two days going through boxes and adding some wonderful cards to my collection.  But I really loved discussing collecting with others who have the same interests.  Next time you're at a show or flea market, chat up the dealer.  You never know what gems they might have sitting behind the table.