Saturday turned into my lame adult version of a whirlwind adventure.  I headed to bed pretty down Friday over a job offer that fell through due to some shady behind the scenes politics.  Saturday was Free Comic Book Day, and for the past 6 years it's been an annual tradition that we would go to a store south of Pittsburgh and meet up with a couple of my good friends from my time in Morgantown.

But Kate was in Chicago playing roller derby, and our West Virginia friends were in New York City for the weekend.  I had made tentative plans earlier in the week with my old roommate from college to go to FCBD, but I was pretty sure I wasn't going to feel up to doing much of anything when I woke up on Saturday.

I woke up Saturday feeling about how I expected, but figured moping around the house alone all day wasn't going to do much good.  So off to the comic store it was.  I wouldn't exactly call myself a comic book person.  I'm certainly not a collector, and just about the only single issues I own are the ones I've gotten on free comic book days.  But I enjoy reading the collected editions.  I enjoy some of the great sci-fi and horror comics out there, moreso than most of the superhero stuff.  But as a proper English nerd, I love good storytelling.  And comics open up some really interesting opportunities that just aren't there when you're working with just text.

Plus I like supporting local businesses.  So my friend met me at the house around 10 and we headed off to the comic store.  As always it was a great time.  From what I've read, many comic stores let visitors pick one, two, or three free books.  The books are free to customers, but there's still cost involved for the stores.  And I suppose they don't want to be spending money on the many kids and casual readers who come out of the woodwork on FCBD.  But the store we always go to, Pittsburgh Comics, lets you take anything you'd like and puts out a lot of other promotional books in additional to the free comic day titles.  It's been a great way for me to discoverother titles I'm interested in, and the extra effort the store puts into FCBD to go above and beyond makes me happy to shop there year throughout the year.  In addition to the free books, I was able to get some great buy 2 get 1 free deals that made for an awesome day.

The weather was beautiful, but it was past noon by the time we pulled in.  From the parking lot I could see vendors already packing up or already driving away.  A rushed walk though didn't yield anything of interest for either of us.  But there's also an indoor section of vendors.  Many were already tarped over and closed up, but I spotted one card vendor.  I headed over to a box while my friend keyed in on some boxes of records the guy had.

My haul wasn't nearly as impressive as my takeaway from the comic store, but I was happy to add some new cardboard. 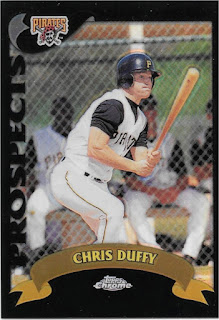 The gem was this Chris Duffy 2002 Traded black refractor.  Pirate black and gold refractors always look great, and the 2002 design may be my favorite.  The 2002 Pirates traded set was prospect heavy, and the Pirates had some surprisingly decent players in it.  Chris Duffy is the last of the significant rookies I needed.  I already have black refractors of Ryan Doumit and Jose Bautista (which I got long before he became a homer hitting machine), so it was nice to complete the trio. 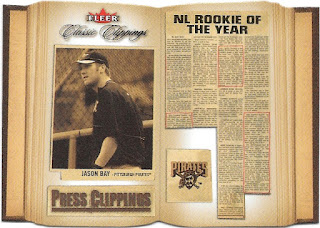 What really drew me in was spotting cards I had never seen before.  It always amazes me when I see a card I didn't know existed.  I've been pretty involved in the hobby going back to the late 90's, and obsessively collecting Pirates since the early 2000's.  So what I see a card for the first time, it's an interesting experience. 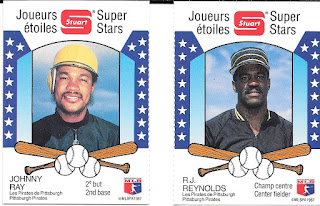 I don't mean have never seen a copy.  I mean full on "huh, never knew that set existed" sort of way.  The Classic Clippings die cut insert is really cool.

And the other cards are apparently from a Stuart bread release that came as a tri-panel card.  Jim Morrison is the third in the set, though he didn't make the scan.  It's my first time coming across either set, so they're welcome additions. 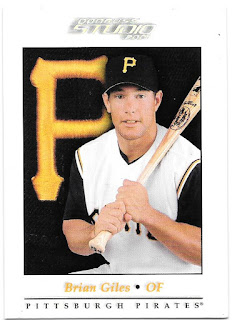 2001 Studio is a set I opened a few packs of in various repacks back in the day.  But I have one lone card from the set - the Jack Wilson rookie, which was nearly impossible to find.  It's a great design, so it was nice to find a base card. 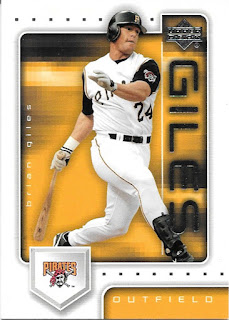 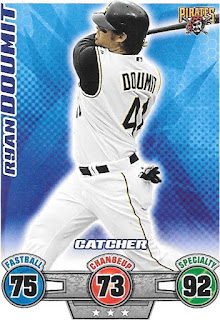 For whatever reason, this particular flea market seems to be the go-to place for oddball cards.  I've seen quite a few different cards there that either were completely unknown to me or are typically tough to find.  The Giles card is apparently a Post Cereal insert from 2003 that I had never seen, and the Doumit is from a 2009 Topps Attax product I didn't know existed.  It's always fun to expand my hobby knowledge. 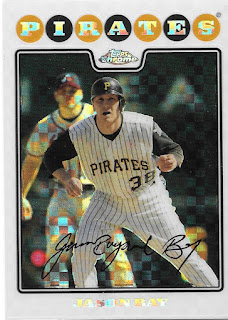 My haul was pretty modest.  I spent $7 at the flea market, and came home to discover that of the 25 dime cards I snagged I already owned 13 of them.  Oops.  My friend did a lot better, grabbing a nice stack of vinyl and a couple of Moby cassette tapes.  Apparently cassettes are an underappreciated format in his eyes.  I'm not quite sold on that argument, but we were both happy campers.

It was a slow start to flea market season, but for a day I hadn't actually planned on going to a flea market it was a great start.  I'm looking forward to getting out there in the next couple weeks and being able to spend a little more time.  But overall it was a great way to spend a Saturday morning and afternoon.