A Mailday 17 Years in the Making

When you're young, time takes on a different shape.  Periods that fly by as an adult - weeks, months, sometimes even years - seem endless epochs as a child.  Time wanders on and on, seemingly taking forever and taking no time at all.

I still clearly remember walking into MG's Cards and Collectibles, the local card store, with my mom in the spring of 2001.  When I saw the box of 2001 Donruss on the shelf, it felt special, different.  I can't remember if I had just stumbled on the product or if I had read one of the teaser articles in Beckett previewing the product.  Probably the latter.  But something about the set just jumped.  The box was brightly colored with vibrant red and blues and featuring new Rangers $25 million dollar man Alex Rodriguez.  And probably more importantly, Donruss was returning to baseball.

When you're a kid, two years feels like a long time.  Donruss' absence from baseball felt like a lifetime.  Its return a long lost friend returning.

The set just oozed cool, in my pre-teen world.  A pack within a pack.  In an age when just ripping open packs - any packs - was exciting, the chance to open two packs in one was mind blowing.  The numbered rookie cards, serial numbered parallels.  For $2, no other pack on the market could offer that with such regularity.

On that first encounter, I think my mom probably bought me 3 or 4 packs.  Nothing crazy, and we rarely spent more than $10.

I remember that first bunch of packs.  I hit my first redemption card.  A redemption for a Ben Sheets Rated Rookie.  It turns out that Sheets was inserted as a last minute replacement, likely for CC Sabathia.  Sheets and some Pujols kid from St. Louis were the only two redemptions in the base set, and were short printed to 500 instead of the normal 2001.  Unbeknownst to me, I had landed one of the toughest cards in the set.

I spent much of that summer chasing Donruss packs across retail and hobby stores, even stopping on our family vacation in hopes of finding more packs.

Over the last couple years, I decided to start seriously buying all the cards 2001 Donruss cards I could.  With the high dollar cards and all the serial numbered parallels, a chance of completing one of the Stat Line parallel sets is out of reach.  But I'll hoard as many cards from the set as I can, recapturing that joy.

I was browsing ebay earlier in the week when I decided to search for 2001 Donruss cards and came across a card I had been thinking about since 2001. 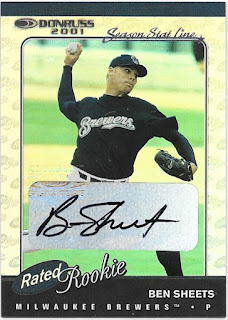 There's a lot of special things about this card, and not just because of my crush on 2001 Donruss.  It's the first instance of the now infamous shiny silver Donruss sticker autos.  Donruss overprinted redemption cards for the Stat Line parallels for Sheets and Pujols.  So while some were filled with the serial numbered Stat Line cards, the rest were sent an unnumbered autograph in its place.  When I saw it, I couldn't hit the BIN fast enough.  At $10 shipped, it was well worth the price to me.

Seventeen years later, my Ben Sheets Rated Rookie has a friend.  And I think I have a new favorite card in my 2001 Donruss collection.
Posted by Mark at 11:33 AM