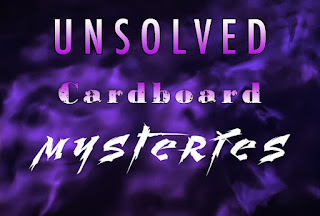 Welcome back for another episode of Unsolved Cardboard Mysteries.  In today's episode, we have a case that hits close to home.  Perhaps too close.

In fact, this was unknowingly featured right on this blog.  In my first post back after a long layoff I wrote about a hot pack that got my collecting juices flowing. 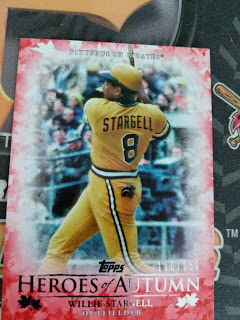 I grabbed a single pack of Update while at the store at the end of last year, and was pleasantly shocked to hit a numbered Willie Stargell insert and a Josh Bell SP.  It seemed like a pretty odd coincidence and a hot pack, but nothing out of the usual.  I've had packs with two inserts before, though it seemed like some great luck that both were Pirates. 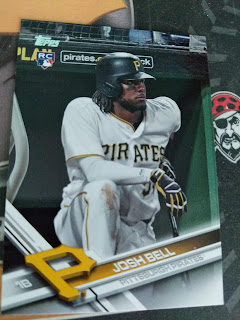 I remember it clearly and unmistakable.  The cards were back to back, the Bell then the Stargell.  Some fine luck, but as my collecting kicked into gear I hadn't thought any more of it.

Until the other night.  I was on the couch getting caught up on entering recent additions into my Pirates master spreadsheet and watching The Magicians on Netflix (which you should check out if you haven't seen it).

I'm pretty out of touch with all of the recent releases and like to keep my spreadsheet largely in line with Beckett's naming conventions.  So I had a tab of Beckett up in Chrome, looking up the "formal" name of any parallel or insert that I wasn't 100% sure on.  As I got to the Bell card, I typed in a quick keyword search - something like Josh Bell 2017 update to make sure I had the right variation tagged.

Beckett can be a little finicky, but usually pretty consistent.

So I tried searching for Josh Bell 2017 sp.  Boom, results.  But the cards said Topps, not Topps Update, and were number 30 rather than the usual UH-XXX numbering.

Again, I'm out of the loop, so maybe they dropped the UH numbering on Update.

And then I took a look at the actual card, and saw that the back very clearly, plainly said Series 1.

But there's no doubt that the cards were pulled from the same pack, back to back.  One pack, two hits.  One from Series 1, one from Update.  The pack didn't look tampered with, and I certainly can't see someone *adding* hits to a pack.  But how do two cards, released in sets months apart, from the same team end up in one pack? 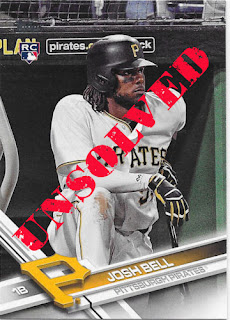 How these two cards ended up together remains a mystery.  Was it Jobu calling me back to the hobby?  A strange twist of fate?  Or a simple factory error?  Perhaps we'll never know.  Has anyone else ever seen a Cardboard Bermuda Triangle like this in a pack?

Join us next time when we look into a sticky situation on one card.