I had an Opening Day post scheduled for today, but with the Pirates rainout I'm going to bump that back until tomorrow.  But hopefully this is a fair consolation prize.

Did you ever wonder how a card design becomes THE card design?  What would collecting history look like if the design for 1952 Topps or 1960 Topps had been left on the design room floor?  What would cards from those years look like?  Would they still be the iconic sets we remember and collect today, or would their place in hobby lore be radically different?

The design process behind cards fascinates me.  How many different designs and ideas got kicked around before settling on the design for the year.  When Topps was the only game in town, and there was basically one set each year there was a lot riding on designing a set that would attract kids.  One wrong design choice could spell financial headaches for the company.

Unfortunately not a lot is known about the mockups and design boards that never made it into cardboard form.  But I have been able to find some different mockups and designs online, mainly from the collection of Keith Olberman. 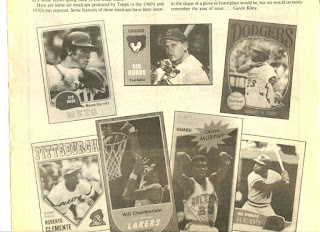 They're fascinating windows into the bizarro world of collecting and what could have been.  But what stop there?  Why not give these designs a life of their own?

The scan above comes from The Topps Archives blog, and is thought to come from an issue of the Baseball Card News from the 80's.

There are a lot of gems there, but check out the lower left corner.  That's a sight to behold.  I believe it's a mockup for 1972 Topps.  The Pirates started playing at Three Rivers in mid 1970, Clemente died in late '72, and '72 is the first real radical departure from Topps fairly conservative designs of the late '60's and early 70's.

For comparison, here's what the '72 Clemente ended up looking like: 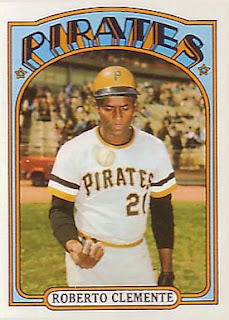 Though they still used a unique, and pretty trippy, font, the city name is replaced with the team name.  And while the '72 design is certainly iconic, I love the radical departure from the earlier Topps style in the mockup.  The home plate design is great, and I love the counterbalance of the team logo (though the mockup is using a long outdated logo, probably because Topps hadn't included team logos for years) and the name and position.

The font is reminiscent of the wild font Topps used on their 1971 baseball set. 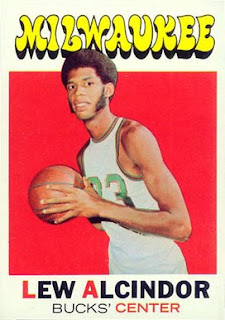 While Topps was willing to take some risks with the designs on their football and basketball sets, the baseball releases played it pretty safe from the mid 60's through early 70's.  The '72 set would mark a pretty radical shift that would result in some incredibly unique designs in '72, '73, and '75.

A design this wild deserves to have a second chance at life. 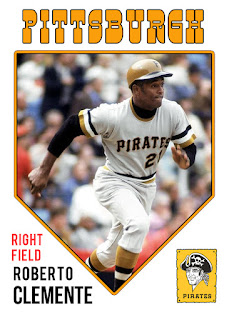 It's tough to tell from the small black and white photo what these cards might have looked like.  But I think these are pretty close approximations.  The font isn't spot on, but I tried to use color combinations that were pretty common for Topps during this era. 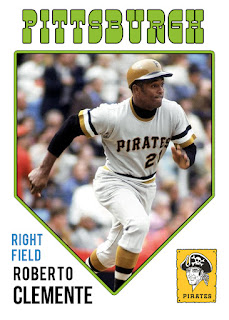 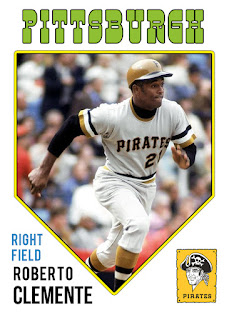 Would they have matched the outline on the plate to the team color or gone with a separate color for the plate border?  Judging by the '72 style, I think the second design is probably more accurate.

Who knows what could have been if this had been the final design.  Maybe the multi-player rookies would have been abandoned for a standalone Fisk rookie card? 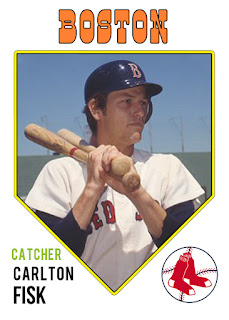 Here are a few other stars of the day. 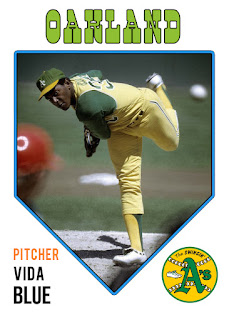 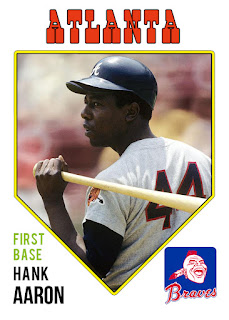 At the end of the day I think Topps settled on the right design.  But I do love this alternate design, and it's fun to wonder what a full set might have looked like in an alternate universe.  It was a lot of fun bringing this unreleased design back to life, so let me know what you think.  If there's interest, I may unearth some other forgotten designs.