Most of the wide ranging baseball facts, tidbits, and anecdotes that I've committed to memory over the years don't have much practical value.  Nobody really cares why Carmen "Bunker" Hill got his nickname, or the distance of the longest home run in Three Rivers stadium.  But every once in a while it pays off.

I won a little contest over at Remember the Astrodome by id'ing the a photo of the first night game at Forbes Field.  The sad part?  It wasn't the ballpark that gave it away.  It was the angle of the photo, shot from Pitt's Cathedral of Learning, and the layout of the parking lot.  And you know you spend too much time thinking about baseball when you know the parking layout of a ballpark *demolished* almost 20 years before you were born.

Bru came through with an amazing prize pack that added some never before seen items to my collection.  Not an easy feat, to say the least. 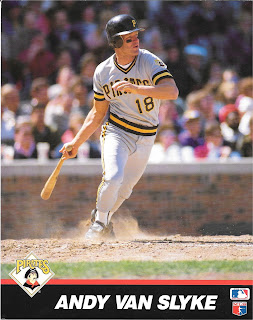 The stars of the package were these awesome 1989 T&M oversized 8x10 cards.  T&M released some great sets of MLB umpires, but I don't remember seeing anything from them with an MLB license. 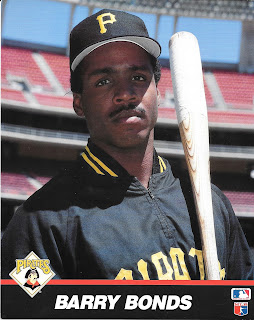 Searching online hasn't yielded much info.  So if anyone knows anything about these, I'd love to know more.  The 4 Bru sent are the Van Slyke and Bonds, Sid Bream, and Jose Lind.  I assume there might be more, since Bobby Bonilla and Doug Drabek would have been bigger names at the time.  But who knows.

Bru also sent along some great (and slightly smaller) team postcards, including one of former Bucs pitching coach Pete Vuckovich. 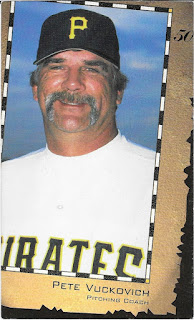 Looking at these great 8X10's got me thinking about all the posters I used to have up in my room as a kid.  These would have fit right in, held up with that green sticky tack like everything else.

In the late 80's and early 90's it seemed like sports posters were everywhere.  I would get them monthly in SI for Kids and in wrestling magazines, the oversized foldout kinds that felt like they were always on the verge of tearing. 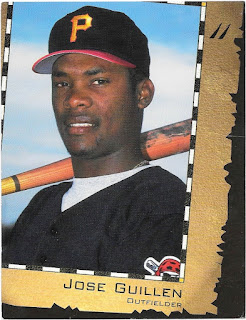 I remember buying up tons of larger posters, printed on sturdy cardstock, at the semi-regular book fairs that would come to school.  I still have a lot of those posters, though it seemed like they never had any of any of the local teams.  My bedroom walls were covered with posters of all the stars of the era.  Even as I got older, those posters of Griffey and Ripken got replaced with concert posters, a huge Bob Dylan poster, and a couple of framed uncut sheets of cards on my walls. 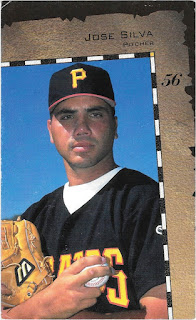 And I guess that has carried into adulthood.  Kate and I both love wall art.  We have a bunch of different prints and pen and ink drawings depicting different parts of Pittsburgh throughout the house.  Each year at the annual arts festival we usually tend to pick up one or two other unique pieces for the house.  And my basement man cave is still covered in posters.  Just slightly upgraded to some sweet lithography or prints instead of book fair posters. 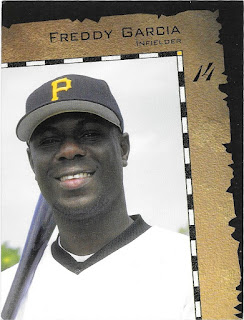 Maybe I'm just looking in the wrong places, but it doesn't seem like posters are as common these days.  I've seen some of the mini Fatheads stickers in stores, and some general team posters.  But the big, player-centric posters seem to be a thing of the past.

But maybe that's not a terrible thing.  After all, I am running out of wall space.

Thanks to Bru for the great trip down memory lane.  Did anybody else have wall to wall posters in their bedroom?  Any favorite posters that stick out?