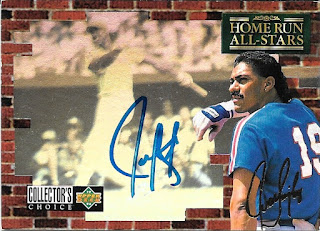 Juan Gonzalez was one of my favorite players throughout the 90's.  He put up monster home run numbers, was a very solid all-around hitter, and played on what I thought were some very cool Rangers teams that never had the pitching to make much noise in the standings.  For a two-time MVP he's sort of become a forgotten player.  His play was overshadowed by more headline-grabbing and charismatic players, and his prime years ended in his early 30's.  But 400+ home runs and a .295 average is a pretty impressive resume in my book. 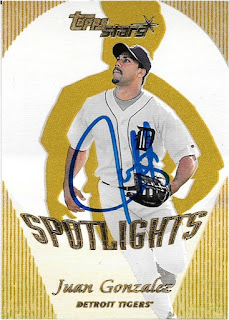 It's awesome to see a player who had an accomplished career signing through the mail, especially when I get stone-walled by AA players who never sniff the majors.  When I started sending out TTM requests in 2004, legends like Duke Snider, Sparky Anderson, Bobby Doerr, and Andre Dawson signed happily for no fee.  Obviously the hobby has changed quite a bit since then.  But it's great to see a fairly recent star taking the time to go through his fan mail. 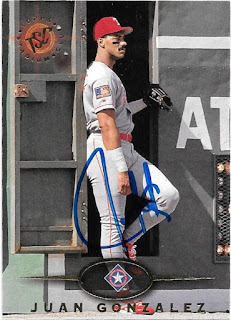 While I already had a couple certified Juan Gone cards in my collection, I'm thrilled to add these.  The Collector's Choice insert is one of my favorite insert sets, and looks fantastic with a signature on the hologram.

I've started sending out requests over the past few weeks, so it should be fun to see what else pops up in the mailbox.
Posted by Mark at 12:54 PM