I've written on here a few different times about the Team Collectors group that I've been a part of for over a decade.  The group was formed on the Beckett message boards what feels like ages ago with a pretty simple concept - send cards of all the teams you don't collect to collectors of those teams, and get back cards of your team.  Over the years it's evolved from a trading circle to a group of true, wonderful friends.  We even have an annual meet up that jumps from city to city for as many as can make it.

After so many years, the group is more about people than cards at this point.  But it's always nice to have a package hit your mailbox. 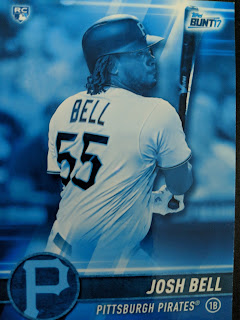 Lately some members have started trading PWE's back and forth.  It's convenient and quick, and most of us are already stuffed to the gills with base cards for our respective teams.  So just the hits is fine with me. 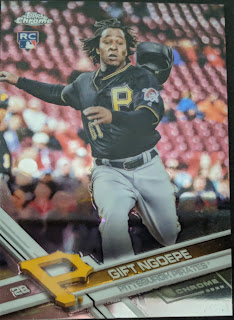 These goodies came in from our D'backs collector.  I was a big fan of Bunt its first year, but I'm not sure how I feel about this all blue everything parallel.  It just feels a little lazy to me, but might be a nice pull for some of the teams that have blue as a primary color.

And Gift?  This might be my favorite 2017 card I own.  I followed his career since he was initially signed, and it's one of the best feel good stories in baseball.  It's a shame he isn't still with the Pirates, but I hope his glove will be able to carry him to a decent career in the majors.