I'm getting pretty good at this whole Houdini thing, disappearing from the blogosphere for a couple weeks yet again. 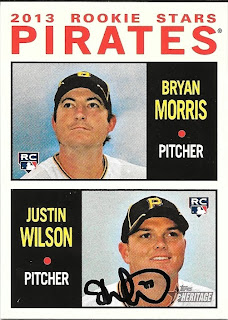 I don't want to say I've lost interest in the hobby; I haven't.  But sometimes getting burned will give you good cause to pull back from the flame.  For years, the highlight of the baseball year has been the Pirates fanfest event, Piratefest, typically preceded by the Pirates Caravan.  In short, it has been an autograph-a-palooza.  Last year I think my final count was somewhere around 200 autographs between caravan stops and Piratefest.  And that was done living 5 hours from Pittsburgh, and attending Piratefest solo.

I had high hopes for this year - a winning team.  Some fresh faces on the team.  And presumably, a team that was looking to capitalize on the good will built up last year.

For those of you unfamiliar with the dance that is a fan fest, I'll lay it out as simply as possible.  Stand in lots of lines to get things signed, and hope that the line in front of you isn't comprised with too many casual fans who will want to hold up the line with a photo, fumble through their belongings to get a hat or mini bat signed the moment they get up to the front (after standing idly for an hour), or feel the need to share some story that could be summarized in a sentence or two with the player.  Ok, maybe patience isn't my best trait.  But after years of practice, I like to consider myself a pro at these events.  And Piratefest is essentially my SuperBowl.

The autograph opportunities were a driving reason behind keeping my season tickets through some years that are best forgotten.  And as the number of season ticket holders dwindled, it became a bonding opportunity for those of us who remained.  Each year it was the same faces in line with you, and I had the wonderful opportunity to get to know quite a few great people simply through standing in line with them for a few hours each December or January.

I wasn't as organized this year as I would have liked, but it didn't matter.  Hours of pulling cards, printing photos, and getting everything perfectly prepared in my binder couldn't have mattered less.

I had early entry passes for Saturday, getting in at 9am rather than noon with the rest of the general public.  In past years, this basically meant free run of the place and almost no lines.  So I was a little more than shocked to see a line stretching the entire way across the convention center to get in upon my arrival.  Maybe it was the general admission line starting early?  Nope.

Apparently these couple thousand people were all now "season ticket holders."  The STH crowd was about the same size as a general admission crowd for Piratefest on a Sunday.  Adding insult to injury, I could overhear most people saying how they had never been to a Piratefest before.  Or "oh, this is nice."  The sheer fact that I saw few backpacks or bags, not to mention familiar faces, meant for most folks this was their first rodeo.

And maybe it was a good thing.

The star power decided to sit this one out.  No public signings for McCutchen, Alvarez, Liriano, Martin, or any other starter.  But you could have your fill of Jaff Dacker, Chris Stewart, or Tony Sanchez.

I stood line line for an hour and a half to get autographs from Justin Wilson.  Just...Justin Wilson.  For comparison, tables would typically have 2-3 players per hour session in the STH area, and I never had any trouble getting through every session at least once.  The line was pretty easy to double up most years, even for bigger names like Andy Van Slyke or Neil Walker.  This year?  The line was quickly wrapped around the building, at least two and a half hours long.  Entirely of "season ticket holders."

So I got my Justin Wilson autographs, and Kate and I left for some Christmas shopping.  I didn't even bother going back Sunday.  And that may be the single most disappointing baseball-related event I've ever experienced.

Total haul?  5 autographs.  And while I undoubtedly sound a bit ungrateful complaining about coming away with something, my bigger complaint is that the team appears to have lost any and all interest in catering to fans.  True fans.  Who needs em if you can fill a stadium full of fair weather fans, right? 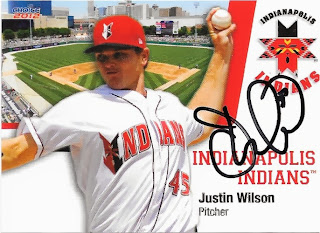