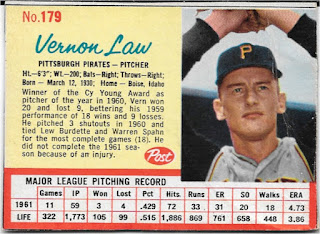 You never know exactly what you're going to find when you walk into a card show.  Sure, if it's a show that happens pretty regularly you can probably expect to see the same dealers.  But over the years I've found many of my best show purchases have come from the stranger who pops up once and is never seen again.  Maybe it's a collector selling off a chunk of their collection or a dealer who wants to give a new show a try.  But at least around here the same old dealers usually mean the same old inventory.  So fresh faces are always welcome.

Our big annual show has become increasingly vintage heavy, as I wrote in my show preview.  That's not necessarily a bad thing.  The show draws dealers from across the country, and brining in some of the bigger inventory sellers who do the National and other major shows usually means better selection and lower prices.  Vintage commons that I routinely see at $2-3 at local show are suddenly in $.50 or 3/$1 piles.  Where even low grade Stargell and Clementes would be listed at close to full book, suddenly there are well loved copies available for less than a cup of coffee.

My problem is that once I have a card, I have it.  Mission accomplished and on to the next one.  And as the vintage tables grew and grew, my needs shrunk and shrunk.  Last year there was only one dealer who had any 2018 cards, and those were just some Topps and Bowman commons.

This year was much, much better.  The balance was restored to the force, and I'd say it was close to a 50/50 split.

My vintage buying scaled back a lot this year, partially out of time and spending constraints.  With multiple dealers with tables full of dime and quarter boxes, I didn't have the time to spend digging through vintage dealers.  And at the same time, it was becoming a losing proposition.  When my needs are down to a couple key cards - Clemente, Stargell, Maz, or high numbers - for most sets, it wasn't worth spending 20 or 30 minutes rummaging through discount bins with the hopes of maybe finding one card I needed.  At the same time, I'm still not ready to bite the bullet and pay for convenience.  There are vintage dealers who have cards in numeric order, or have crisp copies neatly in binders.  But the prices there match the card quality.  Which is to say way more than I want to spend. 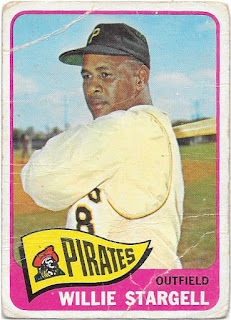 Still, I was able to add a handful of vintage to the collection, including a small stack of Post cards for fifty cents to a dollar each.  My big pickup was this 1965 Stargell for $2.  It's seen better days, but give me a nice placeholder if/when I should ever want to upgrade. 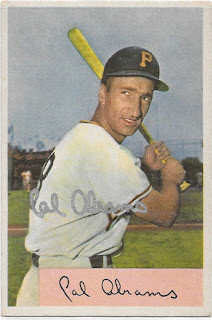 My autograph luck also continued.  I saw a dealer with a lot of autographs, including a two row box full of Pittsburgh stuff.  But every time I walked by the table, someone was in the box.  At one point I camped out looking through their other boxes, waiting for a guy to finish looking through.  It was a two row with all the cards in toploaders - not something that should take all that long to go through.  I looked through the other 8-10 boxes the dealer had out, and this guy - maybe in his late 50's and didn't look all that familiar with cards - was still slowly thumbing through the pile, stopping for 5-10 seconds to stare at each card.  He was still in the first row.  I probably spent half an hour at the table, patiently waiting.  The guy finished the box and had a small stack of 5 or so cards pulled out.  ...and then he went back and started going through the box all over again.

Exasperated, I walked away to find another table to go through.  Whatever treasure that box held wasn't worth losing any more valuable time at the show.  A little later I saw the box open and swooped in.  I mentioned to the dealer that I had been waiting for a couple hours to look through the box, but a guy had been going through the cards at glacial speed.  The dealer said yeah, the guy put most of what he pulled back and bought one card for a couple bucks.  He was looking in the box nearly an hour.  Yikes. 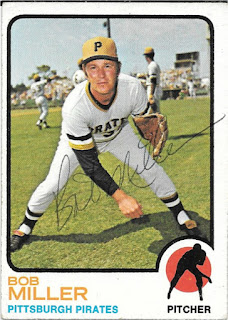 But it was indeed worth the wait.  The dealer was a fellow TTM collectors from Cleveland, and it was nice chatting about autographs.  I ultimately was able to snag two signatures I needed at a great price.  Cal Abrams died in 1997 and Bob Miller was a member of the '71 Pirates and died in a car crash in 1993.  I paid $13 for the pair.  The weekend additions puts me over 60% completion on autographs of Pirates who played from 1950-the present.  Of course that includes most of the easy TTM signers and guys with certified autos, so it only gets tougher from here.  Still, I was somewhat surprised to find I've made that much progress on the 1,000+ guys who have suited up for the team over that time.


But after a couple years of nearly being shut out on modern cards, the newer stuff was where most of my money went.  And I was lucky to find deals a-plenty. 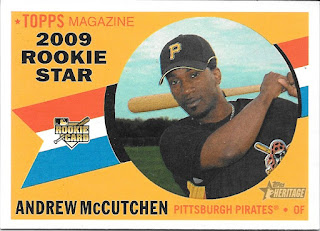 This Andrew McCutchen Heritage rookie is the only card missing from my team set, and was an absolute steal at $1. 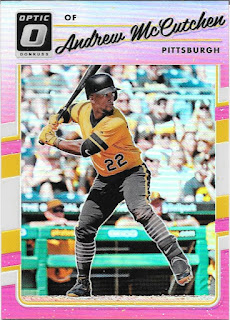 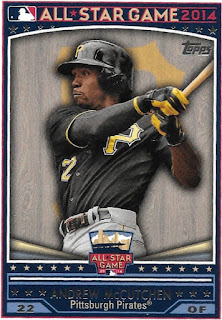 A couple less stellar seasons may not have been great for Cutch, but it's been a boost to my collection.  Even commons had been hard to come across the last few years.  But this year, Cutch was out in full force.  I was able to snag a nice stack of Donruss Optic refractors of various colors from one dealer all for $.25-.50.  And I've always had a sweet spot for All-Star game giveaway cards.  For $1 I was thrilled to knock one off my want list that I had been after for some time. 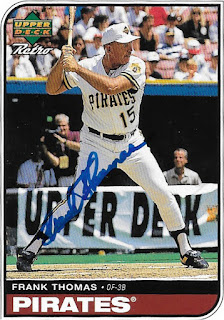 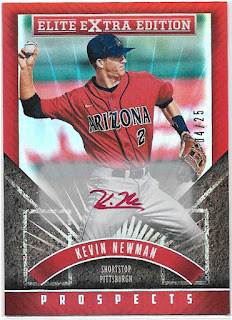 I usually stick to non-hits at shows.  Unless it's a $1 or $2 box, buying autos and game used cards at shows is usually a losing proposition in this area.  You're usually paying a local markup that is at least 25% above ebay.  But with some non-local dealers in town it opened up some opportunities.  While I already have a couple Frank Thomas autographs in my collection, I loved Upper Deck's late 90's autograph sets.  And Kevin Newman is likely going to be the Pirates starting SS sometime between now and next season, so for $3 a rookie auto /25 seemed like a worthwhile pickup. 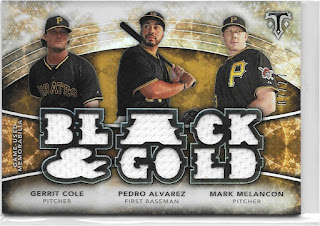 And one of my favorite pickups of the weekend was this triple jersey card.  I know jersey cards are far out of favor these days, but I guess there's a little bit of making up for lost time here.  When jersey cards were at their peak in the early 00's, the Pirates were nowhere to be found.  So many beautiful multi-players cards were released, and every time I would check the checklist hoping for a Pirate card.  And they almost never existed.  So for $3, this was a nice trip back to my mid 2000's collecting heyday.

It was a great two days for me and my collection.  I added a lot of new cards, but also had the most fun at a show that I've had in a long time.  I'll probably be laying pretty low when it comes to card buying until the National this summer.  But the sorting and organizing on all the cards I picked up over the last few days should keep me occupied until then anyway.
Posted by Mark at 10:32 AM